The Ventriloquist Racist Puppet in the White House…!!

On one of my TV shows, the guests were two Pakistani Americans, talking about the controversial of opening a new mosque in North Western Suburbs, after lots of community oppositions, the mosque was finally  approved by the city, “The Mosque now is sharing a building with the post office.” The guest explained.
_That is great, now you guys get your hate mails faster, first thing in the morning. I joked, but the guests weren’t laughing, Pakistanis don’t have sense of humor, we all know that. But maybe it wasn’t a joke after all.

As an Arab/Muslim living in America, I start my day by reading the hate mails, mostly from frustrated racists or uninformed bigots, all aske to go back where I came from. One of the most common thread hate message I get, regardless of topics, argument or even tong in cheek pieces or shows, is “ Ahmed the Terrorist”. 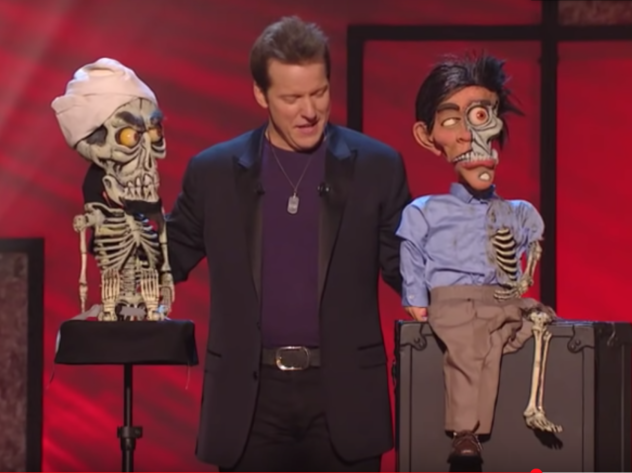 Things has changed a bit after the tragic of 9/11 attack. Jeff Dunham , the most famous American Ventriloquist of American politics and culture, ” One of the most popular puppet for Dunham, is Achmed (Ahmed), the dead terrorist, (Osama Bin Laden), jihadi, suicides bomber and he is dead funny. Millions of hits on YouTube, the terrorist character came after the tragic 9/11 attack, and the hunt for Osama Bin Laden thereafter, “We didn’t know if he was dead or alive, so I thought, “You can’t make fun of 9/11, that will never be funny. But I will make fun of that guy, that idiot. And I know where he is – Osama bin Laden’s dead and he’s hiding out in my suitcase with all my other guys.” Ahmed the terrorist is a skeleton with a turban, who ends all his ranting with an angry burst “I’ll kill you” Well intentioned friend would carefully ask, how I feel about Dunham character, Ahmed the dead terrorist routine, I found it funny, cartoonish, childishly hilarious way of dealing with tragic of 9/11 and terrorism, now it is not funny anymore, actually it is scary. Now for me the Ventriloquist Islamophobic puppet, is real, and it is threatening. Now I’m Ahmed the living terrorist. Trump for his racist white nationalist evangelical supporters is real, he could stand in Fifth Avenue, shoot somebody and get away with it. He can say anything and get away with anything, for anti- Trump is their chief Ventriloquist puppet of racism, misogyny, sexism and Islamophobia. Trump the puppet as Mr. Dunham explained to the Guardian can take things to the extreme and get away with it . Now, white nationalism and white power extremists are real, What it used to be written on bathroom walls, are headline newspapers, what was hidden inside racist heads, now flashing on people foreheads, hating and demonizing Arab/Muslims/Mexicans, Latino, Blacks, now going mainstream. Explosion of lies, filth and Islamophobia spreading on social media, rallies and inside the white house. Hating immigrants/color people is the new patriotic mantra for millions of Americans. Gunning color people down in shopping malls, streets, mosques, Synagogues, explained and justified by the pundits and well-paid experts as whites anxiety and fear of replacement. Building walls, Burning the Quran, “Kill Them All” “send her home” chants, signs flashing in rallies and in our neighborhoods. Blacks are diseases, Mexicans are rapists and Muslims are terrorist. very simple, only whites are the real victims. White racist jihadists declaring war on everyone doesn’t look like them, doesn’t talk like them, they are rooming in our streets and neighborhoods claiming that colored Immigrants, refugees are now the evildoers behind all our problems. Hating them and humiliating them becoming a civil duties. Professor Schultz explained in Counter Punch,… Trump’s strongest support according to a Marist survey is among white evangelicals with 73% approval. Similarly, among Republicans, Trump’s support is nearly 90% and after his most recent racist tweets, his approval went up. Self-avowed Neo-Nazi Andrew Anglin supports Trump, and presumably were surveys among white supremacists conducted, one would find similarly high poll numbers for Trump.” It is easy to blame everything on Trump however, he is becoming the American Ventriloquist puppet, the voice of racism and white nationalism, and white privilege. When there is a white mass shooting, – 255 this year already-, the discussion usually veer to gun control and mentalillness, But How a country that has caused the death of more than 4 million colored people oversea, since 9/11 attack, have a serious debate about gun violence and domestic terrorism at home. Racism is real, is old and it is now going mainstream. The idea that color people are inferior, infested, Rodents, and can’t govern themselves, didn’t start with Trump, Reagan/Nixon tape testifies to that, as Adam Serwer, wrote in the Atlantic “No belief in the history of the United States has been more threatening to democracy than the certainty that only white people are fit for self-government.”, one last thing, this racist ideology, aren’t going to be played by a Puppet on Ventriloquist, Jeff Dunham show anytime soon, the racist puppet is real, and is already in the Whitehouse and he is the voice for millions of racist Americans, and that is not very funny!

Follow him on Twitter @ahmediaTV
Working on a film Documentary, please help support my documentary
The Coptic Grave
Lives in Minnetonka, Minnesota