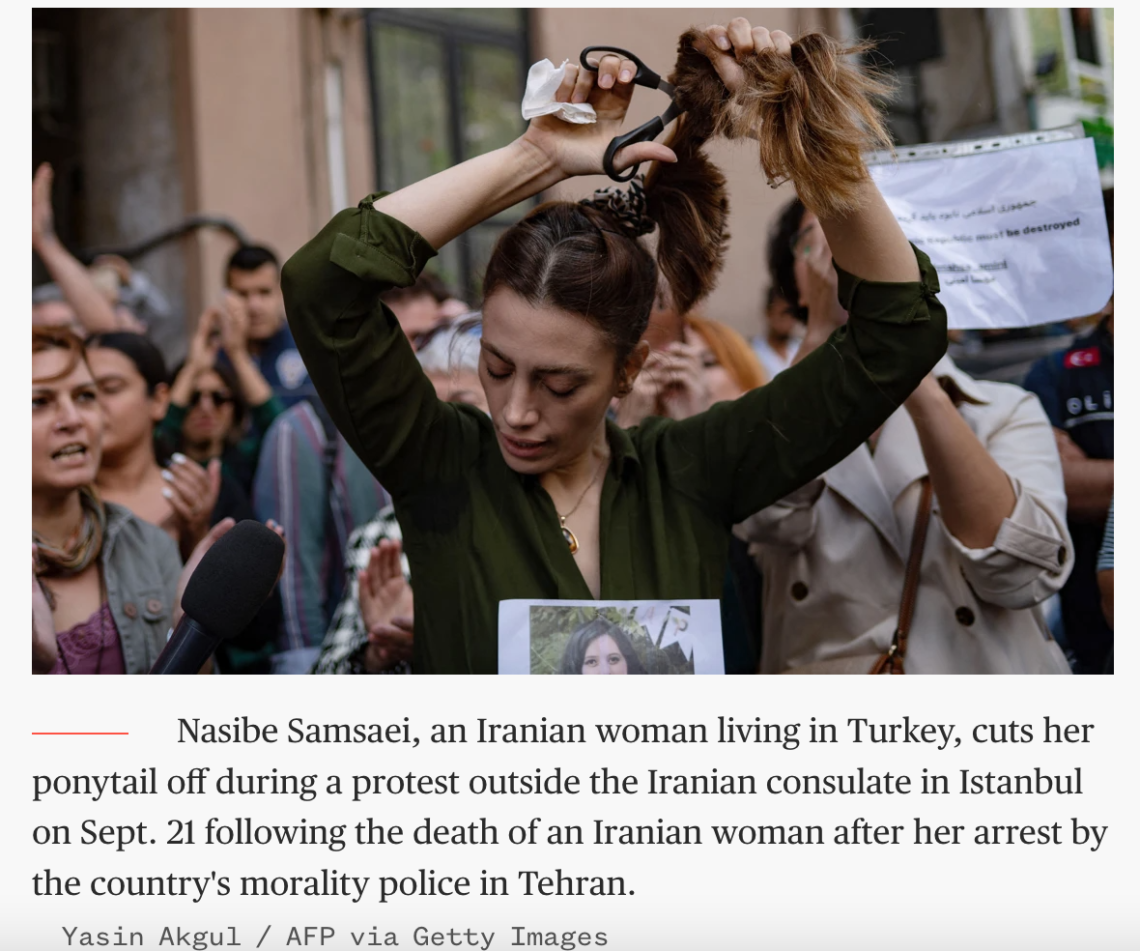 Extensive media coverage of the Iranian women’s protest after the killing of young Mahsa Amini in the Kurdish town of Saqqez has painted the protest as a revolt against the hijab.

Iranian women are rising against the hijab, we’re told in headlines, with images of hijab burning flashing all over the western media — no context, no history. In this reductive and oversimplified narrative there is little mention of minorities’ rights or the economic hardship that Iranians have endured for years. “Nothing warm my heart like seeing women burning the hijab,” thundered a headline from Indian Time, coming from a country where lots of men cover their hair.

Iranians have been protesting against the oppressive Islamic Republic regime since the Ayatollahs came to power in 1979. The hijab has been a symbol of the Islamic republic’s oppressive mandate. The media’s binary vision of the West vs. Islam feeds into Islamophobia around the world. Framing conflicts around the Muslim world as collisions between the modern democratic secular West and the traditional oppressive East is an old Orientalist racist narrative, dusted off to reduce Iran’s political crisis to a showdown where the hijab meets Victoria’s Secret. The West’s fixation with Muslim women’s wardrobes portrays the protest as a revolt of the harem. As the Palestinian-American professor of literature at Columbia University,  Edward Said explained in “Orientalism,” the obsession is part of the self-image of Western sexuality itself. Western feminists supported the military invasion of Muslim countries to liberate Muslim women in Afghanistan and Iraq. Yet women during Arab Spring uprisings wore the hijab as a symbol of protest against oppressive secularized regimes and Western domination.

The so called reformer M.B.S. in Saudi Arabia allows women to take off their hijab as long as they put them on their mouths. El-Sissi’s Egyptian prisons are filled with women who wanted to wear hijabs.

Women’s bodies have been a battleground between religious extremists and secular extremists in the West. The fight to dictate what women do with their bodies, whether in the name of the beauty mystique or sharia law, is all about control, not freedom. In the West, a woman may reveal her body as an expression of her self-assurance and control of her body; a Muslim woman may choose to cover her body for the same reason.

More people obey the guidelines of modern sharia proclaimed on Facebook than follow Muslim sharia anywhere. We tend to accept things if they are presented as “modern”; most of those Iranian women who are burring their hijab are wearing Victoria’s Secret bras, which they should burn first, calling for sexual revolution before a religious one. . I wonder how Western media would cover it then.

Western modernity liberated women from the kitchen to the couch, watching more cooking shows than actually cooking,  teaching them to expose their bodies in public as a form of freedom of expression — to heed the commandments of the fashion industry and spend billions of dollars on clothing that reveals more than it covers. The West wants Iranian women freed from the oppressive Iranian morality police and hand them over to the fashion industry and its oppressive zero-size beauty standards.

Research and mental health professionals tell us about the depression and the increase of suicide rate of our young women trying to live up to this arbitrary beauty mystique. The average American sees over 10,000 ads every a day, telling us how to look, what to eat, what to wear or not wear, and how to lose or gain weight, creating unreachable ideals that contribute to our national anxiety.

The #MeToo movement is long forgotten. A few celebrities fell victim, but now thousands of white middle-class women have put away their “MeToo” signs and returned to their fancy jobs. The most sexually harassed people in America are women of color and those among the working poor.

Iranian women are fed up with the oppressive theocracy in Iran; however, most of the 80-plus crackdown victims are men. They understand this is not a protest against the oppressive hijab; it is a protest against the dictatorial Ayatollahs who violate human rights and minorities rights. Throughout history in the Muslim world, the hijab was used as a national identity to protest foreign occupations or oppressive regimes — taken off or put on as a symbol of resistance, not just as a religious symbol. The hijab in the 30s was a symbol of protesting the oppressive Shah regime, who prevented women from wearing hijabs in public. World leaders, including heads of former British colonies, rushed to England to attend the funeral of Queen Elizabeth,  for millions of people around the world, she is a Walt Disney character at best or symbolized a racist, oppressive Empire for almost 70 years.  No one has even acknowledged the death of Yusuf al-Qaradawi, the most influential Muslim leader and the chairman of the International Union of Muslim Scholars, both died the same week and same age, 96.

“It would be great if the protest in Iran, promoted by the regime’s killing of Mahsa Amini by the morality police for not covering her hair to their standard, toppled the Ayatollahs and led a better world,” wrote Yonah Jeremy Bob in the “Jerusalem Post.” Israeli officials have condemned the Iranian regime, declaring Israel’s support for the Iranian women.

This is coming from a country where they kill girls for wearing the Palestinian flag, not for discarding the hijab. It’s Complicated!!

Ahmed Tharwat, host and producer of the Arab American TV show BelAhdan, is working on a film documentary, “The Coptic Grave.” He lives in Minnetonka.