On early Saturday sunny morning, over 40,000 Muslims rushed to U.S. Bank Stadium to celebrate Eid al Adha, the biggest gathering of Muslims in the western hemisphere, according to NPR. The organizers dubbed it the Super Eid, major promotion camping on Social media and the talk of the town. I got at least 50 different announcements in a few days. Watch out, once an Imam gets a hold of a new iPhone. The event was well-publicized and well-promoted on social media and apps,  enticing people with raffles and a chance to wing an MBW. Ironically, as it was reported, when they announced the winner, nobody came to collect the grand prize. The winner had already left, spoiled the excitement; maybe next Super Eid, there will be hijabi cheerleaders or a chance to win a trip to Las Vegas to ensure everyone stays till the end.

The first Super Eid was a few years before COVID; this year, it occurred as the pandemic is coming back with the new variant spreading, and thousands of people were getting affected every day, thousands of Muslims prayed inside the Vikings stadium on the field, they took a knee where football players aren’t allowed after Colin Kaepernick sat down during the national anthem at an NFL game, which divided the sports world and the nation!. The excitement of being at the Vikings stadium overwhelmed this Super Eid; however, the symbolism of praying and kneeling there is lost. Lots of selfies postings with US bank logo picks with elected officials. Suer Eid has become the superstore, the Walmart of all celebrations, a super celebration in a giant place, closing small local celebrations and making it hard on people to celebrate in their own mosques. “What is super about this, being in a football stadium,” said a young Somali at Eid prayer in N. E organized by Dar Al Qalam Mosque, where I went to cover the local event. “Praying by my mosque by my community is more powerful,” he added. “It costs $150,000 to pray at the U.S. Bank Stadium, “I don’t advocate for that,” said Abdul Ibrahim, Imam of the Dar Al Qalam Mosques and organizer. “We have elders and people who physically can’t go to the Stadium; that’s why we have it near the community,” he explained. At Dar Al Qalam eid celebration, you can see a few hundred gathered on an open soccer field next to the mosque, where lots of people with their new dresses walk with their families and kids to pray. Council city member Michael Rainville, came to the Edi celebration to offer an apology to the Somali community. A day earlier, Mr. Rainville wrongly and hastily singled out Somali youth for fireworks incidents; and announced he planned to meet the Somali community and tell them, “Their children can no longer have that type of behavior,” he barked. At the Al Qalam eid celebration, however, it was a different story! “I’m here to apologize for the statement I made; I’m sorry I leaned my listen. I need to learn more about your culture,” he explained. Most of the Somalis at the eid celebrations were not impressed. A young Somali came to me after the prayer and asked if he could make a statement. “Mr. Rainville apology is not enough, and we asked for his resignation,” he mused. “some mistakes were made, he apologized, and we should just move one’ said another youth. Nearby, a group of seven/eight Somalis with their traditional costumes stood together and posted for our camera; then, when I asked for any reactions to the city council’s apology. “I don’t listen to any politician, only my faith, my family, and my Imam” he got cheers and hugs. As Muslims in America are trying to assimilate, they are becoming more secular; their celebration are becoming secular events; celebrating at U.S. Bank Stadium, serving donuts instead of Eid cookies, becoming consumers not citizens, and families going to Mall of America to celebrate shopping. First Super Eid I asked the organizer Imam of Dar Al Farooq if this money was well spent. “We need our children to be able to talk with their friends about some familiar when they go back to school,” which was worth $150,000.

A few months back, Muslims celebrated the beginning of the holy month of Ramadan in Times Square in New York. “We’re here to explain our religion to all those that don’t know what Islam is all about,” the organizer, identified as S.Q., told CBS news. “Islam is a religion of peace.” He added; that Muslims went mainstream. Thousands of Muslims descended on the iconic New York square unapologetically celebrating their Ramadan tradition, prying the “Tarawwh” Ramdan evening prayer surrounded by the flashy gigantic Madison Avenue voluptuous ads. At the Super Eid at U.S. Bank Stadium, people took selfies with politicians at the Dar Al Qalam eid celebration and asked a politician to resign. Happy Eid, everyone. 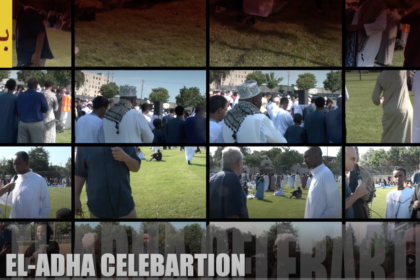