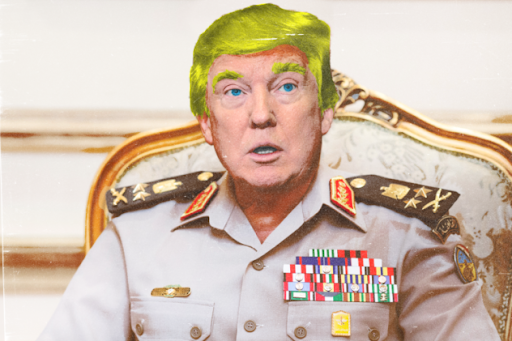 An Egyptian joke goes like this, after one election, the President seemed furious, he summed his Interior minister, whose primary job is to rig elections, stuffed ballot boxes with fake votes guarantee a landslide win for the dictator..

_ How did we do? The President asked angrily.

_ their names, the President mussed.

This election and the Trump refusal to concede, his childish tantrum tweeting now declaring, “I WON THE ELECTION.” ….. I WON THE OSCAR.. too.

He is acting like a dictator trying to get his base and his military to change the election outcome, which  reminds me of elections back in Egypt. I’m homesick already. I came from a country where political choices are overrated. Electing an Egyptian President was much easier than here; the results are known before the elections even start, no fuss, no mus, no electoral collages, all popular votes guaranteed. For almost 70 years, Egypt has only three military dictators, and the choice was either the dictator or nothing, and almost always, the dictator wins a landslide victory. No one dared to contest or run against a military dictator. How do you run against a dictator who runs the country as his inheritances; controls military, police, media, judges, justice department, economy, education, streets, public places, past present and future control the national narrative. That all changed on Jan25th 2011, where millions of Egyptians rose and toppled 30 years of dictatorship. The Jan25t revolution was a rebirth of a new Egyptian nation, with new optimism, new hope, where Egyptians finally reclaimed their own country their lives. The military dictatorship is gone, the nightmare is over, so it seemed. While people still in a revolutionary mood, Egypt had real elections, real candidates, real democracy. Egyptians elected the first civilian President in Egyptian history. Dr. Mohammed Morsi. Millions of people stood in lines for hours in rains, sun, waited to cast their vote, Islamist, secular, Christians, Sunni, Shia, socialist, communists, farmers, rural, cities, all standing together to build the future of Egypt. It was the most impressive comprehensive show of democratic expression Egyptians have ever had the chance to make. After long-contested results, speculation, millions of people stayed for days in the streets; public squares waited to make sure this time, not another stolen election, all votes matter. Dr. Morsi of the Muslim brotherhood party finally was declared the winner, the opponent, an ex-military general, lost, something didn’t happen since the Pharaoh time. The military and the deep state started working immediately on an insidious campaign against the newly elected President. They began spreading lies, rummers, doubts on the election, media espousing conspiracy. The Islamists, extremists, are coming to take away your freedom, make your family wear hijabs, be forced to pray, and fast, they will bring Egypt back to dark ages where your family isn’t safe! It was the worst demonizing political campaign against a democratically elected president in Egyptian history. The military-led by general el-Sisi manufactured a revolt and coup against President Morsi,.

A few days later, the military security kidnapped the first civilian elected President from his house and put him away in an undisclosed location later dies on the court floor during a mock trial, denied due process and medications. Now Egypt is ruled by general el-Sisi, who got some training here in the US. A fascist, a sociopath, and Trump’s favorite dictator. Riggs elections, change the constitution to stay in power forever. el-Sisi launches a fierce campaign against oppositions, media,  civil society organizations, activist Islamists, Christians, Journalists, secular, cities, rural, lies, and falsehood became a culture. Gutted the truth out of politics, education, science, and justice, el-Sisi lost his ability to distinguish between truth and lies; eliminating decency and truth from people’s lives and culture. Wrong became right, innocents became guilty, decency became a crime, the culture of lies and cronyism becoming the norm and enriching himself, his family, and his thugs. General el-Sisi promised to make Egypt Great Again, turning Egypt into a banana republican out of touch and history. His supporters are conflating reality with fiction, and they follow him as if he is their messiah and savior. Sounds familiar; after more than 40 years in America, I live the same nightmare again. After four years of lies, Trump, hatemongering, racism, Islamophobia, and incompetent leadership, causing the revocable death of thousands of people in the Covid-19 pandemic. Now when it seemed the nightmare is over, we have a newly elected president. Joe Biden, with all his shortcomings and uninspiring election campaign, got the most popular votes, most electoral votes, and the majority of Americans rejected Trump’s lies and egomaniac disaster and mismanagement poisonous leadership. The majority of Americans denied Trump another four years, denying him the chance to take America back to the dark ages of racism and racial injustice. Trump and his spinless hardcore Republican enablers, like el-Sisi of Egypt, vandalizing democracy and any sense of decency in American. Trump’s supporters, like al-Sisi’s supporters, lost their ability to see a new reality; and Trump, the TV reality host, now is trying to deny Americans new reality, a fact of a multicultural, multiethnic, diverse country that made America a great place for millions of people from around the world to come and make it their own homes.