Last Wednesday,  Diego Maradona died at his home on the outskirts of Buenos Aires at the young age of 60. Thundered a tweet that was less than 140 characters. The best soccer player ever lived, the artist, the poet, the dancer, Diego the golden boy, the maestro who made millions of hearts stop, his heart finally stops. Maradona, a short 5.5Ft confined a bulky body with a lower center of gravity on the soccer field was the most beautiful thing you’ll ever see. “He was touching the ball as his lover,” a sportswriter wrote; based on where he carcasses it, it will decide your fate. Maradona was the last true footballer. He played the game as he possessed a creativity demon, a mad genius, with a child’s innocence and spontaneity. The Soccer game now gave ways to the more efficient, standardized predictable modern game style dominated by money and obsessed with power. ! The game of Soccer has become a spectacle made for TV. Where viewers watch it on smartphones anyplace, anytime, with introducing VAR, Video Assistant Referee , Soccer lost its soul. Players have become walking advertising billboards, going to the field to do a job, not to play. The game of Soccer was played in stadiums with history and glorious memories live stage for millions of stories to be told. The Maracana (Rio de Janeiro) holds almost 200,000 fans; you can still hear the mourning of the disappointed adoring Brazilian fans after the 1950 World Cup final defeat from their small nemesis Uruguay. Camp Nuo in Barcelona, Spain, with its glorious history, culture, and politics, only place during the fascist Franco-era who can express opposition in Catalonia language. A stadium some of the world’s greatest footballers have played—most notably Diego Maradona and Lionel. Wembley England, where the 1966 world cup final took place, with England only major international win. Estadio Azteca Mexico City, With its massive colorful design, is remembered as the only stadium that witnessed two world cups. We now have new stadiums with names of sponsored by corporations and has names like Mercedes, Home Depot, Fed express, USBank, Alianze with no history or memories. The Metropolitan Stadium in Bloomington, MN, built in the middle of a cornfield in 1976, where almost 50,000 fans watched the Brazilian Pele, another soccer greatest played, is now the shopping mall, MOA, covering its memories with consumer goods. The next world Cup, 2022 in Qatar, has billions of dollars in stadiums built with air-conditioned seats, carpeted stands, and golden bathrooms, but no history or memories. The late Uruguayan journalist Eduardo Galeano wrote in his brilliant, thoughtful book Soccer in the Sun and Shadow. that the goal is the orgasm of a football match. with VAR,  in Soccer, you cant review an Orgasm. Maradona had given millions of soccer fans more pleasure and lasted much longer. Maradona’s scored many goals, but the goal that defines his genius took place at the 1986 world cup, in Mexico, On a sunny June day in a quarter-final against England. Maradona took the ball from the Medfield, with the ball glued into his feet, weaving through the grass like a snake, passing six-seven English players untouched as they weren’t even there, scored a goal that still reviewed and talked about by millions more than 30 years later. This divine goal was four minutes after the “Hand of God” goal that most media talked about, especially in England. “I defeated England without a war,” Maradona once said in El Diego: Maradona was more than just a soccer player; he uplifted millions of poor people from the dark slums and gave them hope. When Maradona moved to play for Napoli, a poor southern city in Italy, he lifts them from the dark slum of the northern soccer elite to respectability, winning two league titles. Maradona turned the soccer field into a battlefield where the underprivileged, people of color, the poor from the south still can dream and win, and the chance to defeat their oppressors and former colonists. Maradona was a repel with a ball on the field; and a repel with a voice off the field using his privilege and fame to speak truth to power, challenging FIFA’s dictatorial regime. Help in South America, Venezuela, Cuba, and Argentina. “Where everyone tried to impoverish us with blockade and embargo, he came to help,” said Venezuela’s President Maduro. “In my heart, Im Palestinian,” he once said, offered to coach the Palestinian national team. Maradona, a catholic, went to visit the Vatican, then he was disguised from the hypocrisy of Pope John II. “I’ve been to the Vatican and seen the gold ceilings. And then I hear the pope saying that the church was concerned about poor kids. So? Sell the ceilings mate!” Maradona was quoted in The Independent in 2005 as saying. “Drugs health problems sided with Maradona fame, glory, and genius. In Soccer in Sun and Shadow, South American writer Eduardo Galeano explains” “he wanted to forget or be forgotten because he was cornered by glory and could not live without the fame that would not allow him to live in peace. He played better than anyone else in spite of the cocaine, not because of it.” Maradona’s brilliance and genius shined on the soccer field before VAR is killing the soul of the game; I never liked VAR or ever asked for it in any play, now; for the first time, I wished the news of Maradona’s death had a VAR. 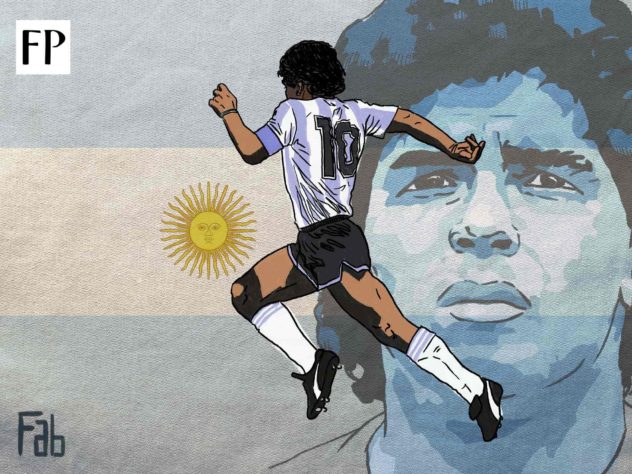