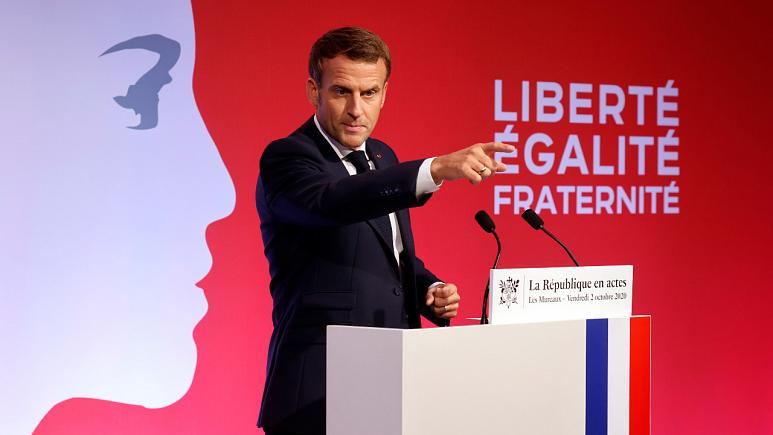 “What is Macron’s problem with Islam and Muslims? He needs mental health treatment,” Turkish President Erdogan said last Saturday in reaction to the French president hateful Islamophobic comments declaring that Islam is in crisis and problematic and needs to be contained. He later supported the publishing of the Prophet Mohammed insulting Charlie Hebdo cartoons under the pretext of freedom of expression. “Our history is one of a battle against tyranny and anaticism. We will continue,” Macron tweeted in three languages, French, English, and Arabic.! And the racist language, I may add. Macron, Unfortunately, left out the French colonial fascist history in Africa, north,

and south and its dark racist history at home. Macron once again telling Muslims hat France’s liberty, equality, and fraternity are not for Muslims. Muslims are only accepted when they stop being Muslims. If you are Muslim seeking liberty, equality, or fraternity in the mind of Macron, you are non-French. Furthermore, “while Macron says the “radical law” is intended to strengthen France’s time-honored concept of “laïcité” – the idea of a secular French state, it would, in fact, do the opposite, and allow state intervention in matters of religion, effectively sealing the official death of “laïcité”.” explained Yasser Louati,  a Human rights and civil liberties activist based in Paris.  A pouring of protests spreading across the Muslim world, a call for boycotting of French products everywhere. Since the 9/11 attack, Islam and the Muslims has been the political hot potato in the western political playground. Bush declared a crusade on the axis of evil, Obama asked for a dialog as he is bombing them, Trump banned Muslims, and now the embattled French president joins the war on Islam and Muslims. Emmanuel Macron’s fierce campaign against Islam and Muslims has not come out of anywhere. It is the product of racism rooted deep within the French psyche. It is a crisis of French values not of Islam.” Wrote

Dr. Amira Abo el-Fetouh. The the interesting thing about these protests, which western media characterized it as emotional and out-of-control anger, those angry Arabs, angry blacks, angry Muslims, etc. “Anger spreads in the Islamic world after Macron’s backing for Muhammad cartoons” flashed the Guardian headline;. Most of the protest, however, can be seen in countries that any protest almost is illegal and banned, Muslim countries that are ruled by ruthless Muslim leaders who, in most part, share French president Macron short-sighted view of Islam. Macron never protested general el-Sisi executing 46 Egyptians last month alone, or when el-Sisi massacred 1000 Egyptians in one day at Rabaa and el-Nahda Squares. These protests now, in most part, are Muslims who have been marginalized for such a long time. They see that their religion and identity have been under attack from the West and their corrupt leaders. The underspending reasons for the protest are more of a protest against their inept Muslim leaders than Macron’s insulting attacks. Not so many Muslim leaders short of Erdogan took on Macron Islamophobic hateful tirades. Arab/Muslim leaders in Egypt, Saudi Arabia, UAE, Sudan, Pakistan, and elsewhere who have been calling for religious tolerance, the self-appointed spokesmen of moderate Islam banner are now awfully quit. Macron is facing significant crises at home, now turning into the enemy within. Even Muslims in France know that, and Muslims in France, in most part, quit. They know this is Macron to appease to the rights and a desperate attempt to out-stage far-right wing leader Marine Le Pen’s.. Macron has been facing protests against his neoliberal economic falling policy and climate policy for years. He needed a diversion. He needed a fall guy, Islam, and Muslims ready to help. The Muslim protest is not organized or monolithic; its country has its dynamic and domestic political flavor. For example, you don’t see many demonstrations in Turkey, its leader, Erdogan standing out, and challenging Macron, calming millions of Muslims mot just in Turkey but around the world who aren’t in the street or limited their protests on social media. Avast debate within Muslims themselves, what best of actin or reaction to this systemic assault on their Prophet and their religion. Some protesters helplessly using mockery to counter Macron mocking of the Prophet, showing demeaning pictures of Macron wiled youth life. Some showed demeaning caricatures of Macron much older wife; an irony is lost on them. Where rightly so, some argued that the Prophet Mohammed himself was married to Khadija. A successful businesswoman that was 15 years his senior, What is interesting about these protests that are, in most part, expressed peacefully and in a political and economic means. Boycotting French products, arts, films, and even sports.Yourarely would see a Muslim, regardless of how outrageous he/she is, reacting to the insulting of the Prophet Mohammed by insulting Jesus or other prophets. There is, in most part, great respect and reverence to all prophets and major monolithic religions. Some warning that their Prophet is a red light for insult or criticism. Prophet Mohammed, for Muslims, is not just a religious leader; He is their ideal leader. A few weeks ago, Macron went to Lebanon to save it from the brink of another civil war, making sure its sectarian system is intact, now thinks Islam is in crisis. Macron’s problem with Islam and Muslims is not a religious one either. It is a political, economic problem expressed in religious forms. The French Muslim student who cut his teacher’s head for showing the insulting prophet cartoons in class, he is more of a French than a Muslim. The most hardcore jihadists who joined ISIS were those young westerns enraged by convert zalosy. While Macron expresses his economic and political crisis in religious terms, Muslims express their religious problems in political and economic terms. Islam isnt in crisis, extremism is!!

Blogs under Notes From America