On June 17, 2012, Mohammed Morsi was elected as the president of Egypt. On the same date seven years later, having been ousted from that role, he died in court while on trial for bogus charges such as conspiring with Qatar and Hamas, breaking out of jail, and letting prisoners escape during the chaos of the 2011 revolution.

Morsi did not have much leadership experience, he wasn’t a military man, he showed a great level of incompetence and political naivety, he was nicknamed the stepen, accidental president .  But he was a symbol and a product of that revolution, which gave Egyptians some hope. He wasn’t just the first and only democratically elected civilian president in modern Egyptian history, he also was the first Egyptian president to die since 1981. Then it was Anwar Sadat, assassinated by a military officer during a parade. Hosni Mubarak then took the helm and ruled Egypt for 30 years without meaningful elections, keeping peace with Israel and war with his own people. brought the country to ruins and irrelevance — economically, politically, educationally, culturally and militarily — and was toppled by the January 25 Revolution in 2011. Are you still with me? Believe me, it gets more interesting. Morsi, who had received his doctoral engineering degree from the University of Southern California and came from the Freedom and Justice Party — the political wing of the banned Muslim Brotherhood — had been elected by more than 12 million Egyptians over his opponent, a former military general, Ahmed Shafik.

A year into his presidency, and before he had enough time find out  bathrooms or the escaping exists  in the presidential palaces, , on July 3, 2013, he was ousted in a military coup led by his defense minister, Abdel-Fattah el-Sissi, a military general who also had studied in America. Morsi was kidnapped from his office and left incommunicado for almost a month. Six weeks later. General El-Sisi was a military man  his biggest accomplishments , were heading military intelligence, and overseen the division of the  Forced Virginity Test , that was performing virginity test of young protesters in streets and Tahrir Square during the revolution.  Another , when Sending  his militia  security forces to shot dead at least 817 protesters, mostly from the Muslim Brotherhood, who had gone on a general sit-in strike demanding that this modern-day pharaoh let Morsi go. As was reported by Amnesty International and human-rights organizations, this was the biggest massacre of protesters in Egyptian history.

Morsi spent six years in prison, in solitary confinement, like 60,000 other political prisoners, including my young nephew Hassan Al-Adawy. When Morsi appeared in court, he was kept in a bullet-resistant glass cage, unable to talk to his lawyers or see his accusers. His family was allowed to visit him three times in all these years — though only his wife and daughter; his  sons were denied visiting rights. His treatment in prison was a series of abuses and strategic medical negligence that slowly killed him. An Audio leaked of him talking about the mistreatments and his health problems. “i’m surrounded by glass mirrors, I cant see, I don’t know where Im right now  and who is talking to me’ he complained

Morsi had a severe diabetic condition and other health issues. When he appeared in court on Monday afternoon, and according to some witnesses, he collapsed and left unattended for 20 minutes before rushing him to a hospital, but was dead on arrival.

In less than 24 hours — in secrecy and without a medical report — he was buried in a military cemetery. Not even his wife was allowed to see him.

Morsi’s premature death (he was 67) shows how fragile and paranoid the military dictatorship regime of el-Sissi is. El-Sissi now has rid himself of the last symbol of the January 25 Revolution, as did Gamal Abdel Nasser — president of Egypt from 1954 to 1970 — with another Islamist, Sayyid Qutb, who was executed by hanging in 1966, turning him to a martyr.

Reaction to Morsi’s death in Egypt is almost surreal — a complete media blockage, programming against the Muslim Brotherhood, demonization and outlandish accusations, showings of violent videos of terrorism. His death announcement appeared in a few footnotes in major state newspapers. A TV presenter,   threatened anyone to dare to protest, ” we will hunt you down” he vomited. Another TV presenters reading what it seems an official statement sent from security, which at the end.. the present read…   .. “this was sent from Samsung device ” which has become a social media trending with a hashtag #SamsungMedia  . The tragic part of this Shakespearean turn of events is that even Morsi’s enemies could see the unfair and criminal treatment he received compared with his unelected predecessor Mubarak, who spent most of his own trial circus in a luxurious military hospital surrounded by family and who never lost access to his privileges. Mubarak eventually was cleared of all charges and, despite having lain in a bed appearing sickly during his trial, walked out of court as a free 91-year-old man.

As yet we haven’t heard any reaction to Morsi’s death from President el-Sissi, sent security and melitas allover Egypt to secure squares and Morsi house, as he escape to the  country of Belarus to plan the future relationship of the great nations. The death of President Morsi will hunt elsisi to the end like a ghost.   As Jean-Paul Sartre once wrote: “If a victory is told in detail, one can no longer distinguish it from a defeat.”

The Irony  of all this, On African Cup of Nations championship , which is held in Egypt same week of Morsi Death…. a big giant status of Anobis , the god of death was featuring in the opening ceremony. elSissi our man in Egypt, as long as he keeps in line , peace with Israel and war on terrorism he knows,  as MBS before him can get away with a murder..!! 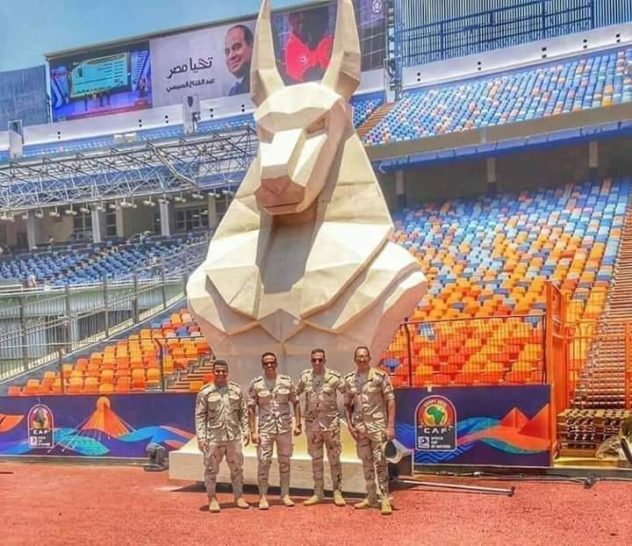 .Ahmed Tharwat is host of the Arab-American TV show BelAhdan. He grew up in a small village in Egypt. He blogs at Notes From America (www.ahmediatv.com). Follow him on Twitter: @ahmediaTV.