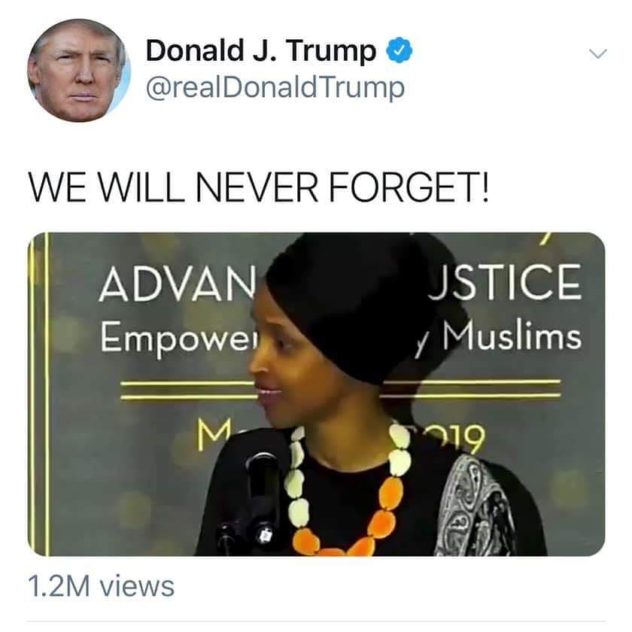 When a head of state issues a fatwa against an individual for speaking out, you have no chance. According to the dictionary a fatwa is “a legal opinion or decree handed down by an Islamic religious leader.” This is not just a religious or a Muslim thing and only in so called third world countries however, Obama issued lots of secular Fatwas against suspected terrorists, in the “kill list“, a list of people they need to be killed without any evidences or due process, just send the drones. Then we have now, Trump’s twitter video is another form of a secular fatwa – to end someone’s life either politically or literally.

We all remember thirty years ago, February 14, 1989, a fatwa was issued against Indian British writer, Salman Rushdie for writing a book, The Satanic Verses, as according to the Ayatollah it desecrated the Prophet and the Quran, and according to the fictional novel, some people (devil) said something (verses) to the Prophet other than Archangel Gabriel. The fatwa was issued by supreme leader of Iran, Ayatollah Khomeini.

This fatwa got more attention and worldwide outcry from the champions of the free world, protecting our civilization, our freedom, protests, condemnation, boycotts, group solidarity reading vigils, writers’ protests; all this for a fatwa no one ever took that seriously other than Salman Rushdie himself who made a fortune selling his novel. Thirty years after the fatwa Salman Rushdie is still enjoying his literary life and writing books, however Ayatollah Khomeini died a few months after the fatwa, showing that even God didn’t take his fatwa seriously.

Now, another head of state, Ayatollah Trump issued a fatwa against Rep. Ilhan Omar, a video tweet fatwa accusing Ilhan Omar of not revering the sacred 9/11 tragedy enough and speaking lightly of victims, referring to them as “some people”. The video, as we all now know, was edited and took her words out of context from a 20 minute speech to CAIR, a Muslim advocate group. Her words in the tweet video were superimposed on images of the horror of the 9/11 tragedy, a long stretch of imagination for a man who has none.

Trump in his tweet, wrote in bold “WE WILL NEVER FORGET” inviting his devoted deceitful to do the honor. Following this, Rep. Ilhan Omar’s office reported a sharp rise in the number of serious threats on Ilhan’s life, Omar releasing a statement on Sunday about the threats from Trump followers: “Since the President’s tweet Friday evening, I have experienced an increase in direct threats on my life—many directly referencing or replying to the President’s video,” she wrote.

Nancy Pelosi, who has been treating Congressman Omar as a runaway slave, asked Trump to take his vicious video down from his twitter feed. If she can’t impeach Trump, at least she can impeach his twitter video. Trump, the man who hours after the 9/11 attack appeared to brag about his building being the tallest in New York, the man who dodged the draft five times, is now lecturing us about patriotism, and Monday, has the gumption to come to Minnesota where Rep. Omar’s district resides spreading more lies and Islamophobia in the her backyard.

This is not the first time Trump has issued fatwas against Muslims, singling out and spewing hate against them, from the Muslim ban, and “Islam hates us“, to thousands are cheering the fall of World Trade Centers; all these lies were debunked and rejected. But like other lies about immigrants, women and minorities, Trump has a knack of picking on the vulnerable and weak.

The reaction to Trump’s twitter fatwa against Rep Omar is however different to that of the Ayatollah’s against Salman Rushdie. It is muted, not a single person from the GOP coming out of their hate dungeon to express outrage or even an outburst. Democrats’ reaction, short of a few from the left wing of the party, were strangely quiet. The conservatives and right wing media reacted by nullifying and demonizing Ilhan and Muslims. From accusing Ilhan of supporting a terrorist organization, to being un-American, the New York Post, one of Murdoch’s propaganda machines, took the lead with a front page hitman ad condemning Ilhan Omar of airplanes colliding with the Twin Towers. “Rep. Ilhan Omar: 9/11 was ‘some people did something,’” the headline read. “Here’s your something: 2,977 dead by terrorism.”

Ilhan Omar, as Zak Rice wrote in the Intelligencer, Ilhan, “never stood a chance.” Ilhan biggest problem is not that she is un-American and subversive, but in fact the real problem is she is trying to fully be a citizen in plutocratic America, she wants to have the privilege to express herself, to be witty, (all about the Benjamins baby) if she wants. If you look to her words at CAIR, where Trump and other right wing nuts twisted and found them ungrateful and un-American, it is in fact as Peter Beinart wrote in the Atlantic, “Omar’s core argument was simple: We Muslims are not guests here. We are as American as everyone else and, thus, we should bring our full selves into the public square.”

“For a really long time in this country,” she said, “we have been told that there is a privilege that we are given, and it might be taken away. We are told that we should be appropriate. We should go to school, get an education, raise our children and not bother anyone, not make any kind of noise, don’t make anyone uncomfortable.” Now Ilhan realized as a Muslim, Black Woman, these are god given rights only for whites. White politicians can get elected for being racist, sexist and nationalist. However, Ilhan is facing the triple crown of vices in this country: Islamophobia, Racism and sexism.

No matter how good her intentions, and no matter how much she tries to speak against tyranny in Egypt, Saudi Arabia, Iran, and against the Israeli occupation and mistreatment of Palestinians, condemning ISIS, terrorism, al-Qaeda, Al-Shabaab, and for justice and equality for everyone, she will never get a fair shake. In the current political climate, where the clown is running the political circus, Trump brags about grabbing women by the pussy, and Nancy Pelosi wants to grab the American people from the center, Ilhan Omar stands no chance. There is a fatwa on her head and it is not the hijab.