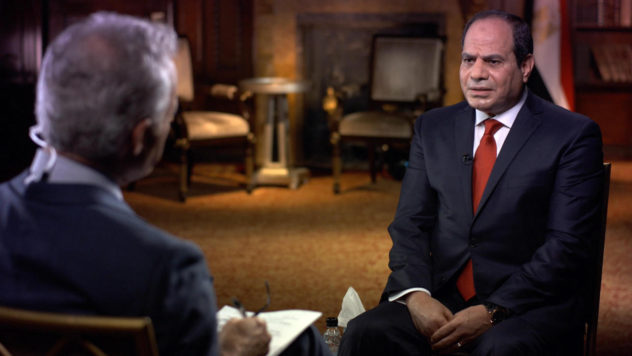 The Psychopath of Egypt on 60M

The recent CBS 60 Minutes interview of Egyptian president Abdel Fattah el-Sisi revealed as much about our media hype as much as the unstable psychological status of Egyptian dictator, this was not the first to feature an Arab dictator on a major American news network. The US media have been prepping Arab dictators for years, from Saddam Hussein, Muammar Gaddafi, and Nobel peace winner Anwar Sadat, to MBS the Saudi young reformer; humanizing mass murderers like Reagan, Bush (father and son), and Netanyahu is becoming mainstream news. In a nutshell, the media here is not working for the public good as it was intended, instead, America’s interests and money drives the corporate media’s moral compass, adopting government narrative during wars and the corporate pocketbook and ratings during peace.

In the case of the Washington Post’s tireless coverage of the gruesome killing of Saudi citizen and journalist Jamal Khashoggi and crusade to expose the Saudi royal family’s handling of the tragic killing, against American interest and the Trump administration’s hierocracy, this was an aberration and personal crusade by the Washington Post Opinion Editor, Karen Attiah and sense of duty to her friend Jamal Khashoggi.

With the 60 Minutes interview of Egyptian dictator el-Sisi however, it appears to be an interesting case of self-promoting journalism and celebrity journalist grandiose. CBS mooted it as “the interview the Egyptian government don’t want you to see,” and for days released snippets to lure viewers and increase ratings, which incidentally was conducted last September during el-Sisi’s address at the UN in New York. “They sent us a formal request to stop airing the interview” the 60 Minutes producer claimed. All this hype and drama about an interview lasting a few minutes with a dictator who Trump himself called the “fucking killer.”

Scott Pelley, the 60 Minutes host, bragged about the interview in a self-serving manner; “I’m trying to ask him questions he doesn’t get at home,” he puffed. There are millions of Egyptians who have been asking the same questions but not getting the attention of the western media. I myself have been raising these questions for years, in my writing, my TV program, and even to Mohamed Tawfik, the Egyptian Ambassador to the US when he came to visit Minnesota to honor Dr. Ismail Serageldin, executive director of the ancient Alexandria library three years ago.

There was a great deal of hype and speculation regarding the interview, even before it was aired. Social media in Egypt and Al Jazeera focused on the confused and sweaty dictator, whereas the Egyptian media, private and state owned, refused to cover the interview, waiting for instructions from el-Sisi’s security. Instead they covered the opening of a huge Cathedral and Mosque that el-Sisi built in the new capital, this strange mammoth building, standing alone in the desert with no one around, another metaphor to how isolated el-Sisi is now, building his own illusion.

In the interview el-Sisi denied there are political prisoners, any oppression of freedom, denying the killing of peaceful protestors, forced disappearances, branding the Muslim brotherhood and anyone who opposes him a terrorist, in addition to denying the coordination with the Israeli army to fight terrorism in Sinai, which everyone knew, ask any Egyptian, and I don’t think the Egyptian government or el-Sisi cares that much about Americans’ reactions. El-Sisi knows that he is the only option to the West in the so called War on Terror, and that Americans are busy with Trump’s wall and the looming possibility of impeachment.

60 Minutes host Scott Pelley tried the argument, “American gives Egypt almost 1.5 billion every year, the biggest aid in the world short of Israel – Why should America invest in you?” he asked el-Sisi, as if our foreign policy was driven by a cost benefit analysis, not principles. Despite el-Sisi looking utterly uncomfortable, sweaty at times, and confused, if you look closely at his answers and the way he handled himself in front of the camera, he seemed to be a man that is delusional and actually believes in his own lies, an isolated and disturbed general, an ignorant military man with a strong conviction.

Abdel Fattah el-Sisi, is a killer, a chronic liar and delusional, intoxicated with power and a narcissistic personality that demonstrates the traits of a psychopath. Here is a list of psychopathic traits provided by online magazine Learning Mind; let us see how el-Sisi fares in the psychopathic test..

Contrary to all Human Rights organizations’ reports and eyewitness, (my Nephew is one of them), el-Sisi insisted that “we don’t have political prisoners in Egypt,” and also that “thousands of weapons were found in Rabaa,” where the Egyptian government itself denies that.

“Where do you get your information?” he fired back with a disturbing smile, to host Scott Pelley when asked about the number of people killed in Rabaa, stated in Human Rights organizations’ reports.

Grandiose sense of self

“30 million Egyptians were in the street demanding my help, I’m trying to save Egypt from becoming Syria and Libya.”

“When you have armed people fighting with police, you don’t know who is killing whom,” his response to the 2013 Rabaa Massacre where a disproportion of armed forces were used to disperse and kill civilians.

Lack of remorse or guilt

“We are fighting (a) group of people who want to impose their extreme ideology on the Egyptian people, we have to eliminate them regardless of their number,” responding to the killing of almost 1,000 people at what was coined the Rabaa Massacre.

Callousness and lack of empathy

“Are you following closely what is going on in Egypt?” he asked with an idiotic smile.

Egyptian security killed 40 people right after a terrorist attack on a tourist bus by the Pyramids, no trial, no names, no media coverage.

“We have extremists put on trial, I have to follow the law,” responding to the human rights report of more than 60,000 political prisoners under el-Sisi.

“haha, haha, haha” – el-Sisi laughing like a stoned person in response to being asked “Some people refuse to call you president, they think you are a military dictator.”

“El-Sisi began by jailing the Muslim Brotherhood and other Islamists. He extended it to secular opposition groups. And now he’s even going after poets and artist and bloggers,” Andrew Miller, Egypt director in the National Security Council under Obama, explained to Scott Pelley.

“First they came for the socialists, and I did not speak out, because I was not a socialist.

Then they came for the Jews, and I did not speak out- because I was not a Jew.

Then, they came for me- and there was no one left to speak for me.”

.. it’s now happening all over again in Egypt.