Rep. Rashida Tlaib responded to her  “impeach the motherf—er” comment:

” … I want you to know that I will never apologize for being me, and for being passionate and upset” – coming from a color, Arab woman, you got to love it!

The hysterical reactions to Palestinian-American Congresswoman Rashida Tlaib using the M word, the mother of all cussing, had everyone wondering; was she going to apologise, was this helpful, and how was this going to heat up the new left and democratic party agenda. From Conservatives, liberals, the media, to mosques, churches and pulpits, republicans and democrats, men and women all showed a degree of outrage towards Representative Tlaib.

Why was there such widespread outrage to Rep. Tlaib’s comments that took place in a bar to a group of her supporters, celebrating the first Palestinian Arab, Muslim women elected to Congress? People say worse than that in sports bars and restaurants. This wasn’t on national TV or at the White House. “I’m very passionate for fighting for us … I want to tell all women out there, be yourself, not hold back, don’t think you can’t get passionate and angry,” she insisted, injecting sexism and double standards used to box women into a traditional role and control not just her body but also her mouth.

Most of the outrage came from the very same people who voted for a man who makes a life and fortune from degrading women and using vulgarity and profanity as a political strategy. A man who once said on national TV that he would date his own daughter if he wasn’t married; being her father in his sick mind wasn’t an issue. We live in a world now sensitized to potty-language, accustomed to a President who bragged about grabbing women by the pussy, as “boys will be boys, and it is just locker room banter.”

Lots of pundits are trying to paint the newly elected, Rashida Tlaib, Ilhan Omar, and AOC, Alexandria Ocasio-Cortez, as the radical left who are going to shake up and bring down the Democrats. The Party has been kidnapped by the Wall Street Democrats, Clinton and Obama and needs to be shaken up anyway. However, Rep. Tlaib is  shaking the American stereotype of Arabs and Muslims, she is shaking the demagoguery of Trump. She is the kind of person that keeps Trump and his supporters up at night, she is their worst nightmare, she is a woman, a Muslim a black and an Arab Palestinian; Millions of  Americans may love an angry bird, … , but nothing scares Americans like an Angry Arab.

Americans have been stereotyping Arabs for years, led by Hollywood and the mainstream media, confusing being passionate with being angry. Arabs, like African Americans and Native Americans, are painted as hopeless, angry people who just can’t use civilized means and words in problem solving, unlike us whites. This orientalist view of Arabs is old, flat and racist. Rep. Tlaib explained that her passion got the worst of her. I beg to differ, I think it got the best of her, an inspiration not just to women of color, but for all of us Arabs and Muslims.

Helping break the angry Arab stereotype, we need to own it, we need to tell ourselves it is ok to be angry, it is ok to be passionate. “If you aren’t angry you aren’t paying attention,” one once said. Lots of Americans aren’t paying attention to the real cussing profanity and political vulgarity around us, sending white men accused of rape and sexual assault to the White House and Supreme Court, in addition to the billion dollar xenophobic wall, banning Muslims, racism, and police brutality; shutting down the government for millions of average workers while cutting tax to a few with insane wealth.

Arabs and Muslims in the United States need to stand up and let their voice be heard loud and clear, not be intimidated by Trump’s demagoguery and Islamophobia. Get involved in politics and protest, run for office or support ones who do, be another Ilhan Omar and as angry as Rep. Tlaib; stop that motherfucker and his supporters from ruining what minorities in this country have accomplished and gained in the last 50 years.

Democracy is judged by three things; equality, rule of law and protecting the rights of minorities, not those of the super-rich and Wall Street jihadists. This is not just a civil rights issue, but a human rights issue, the right to live free with dignity. The same rights that Arabs living in the most oppressive region in the world asked for when they got angry, the Arab Spring, where millions revolted and went to the streets to protest and be loud, demanding real change, demanding the toppling of rotten, despotic regimes.

They may not have articulated their demands as Reb Tlaib did, but like her, they were angry as hell and couldn’t take it anymore. They didn’t chant in the streets of Tunisia, Cairo, Damascus, Sanaa, with the colorful language of Reb Tlaib, but they simply said ‘Erhel’, ‘Leave’. As the Polish sociologist Zygmunt Bauman said “Madness is not madness when shared.” 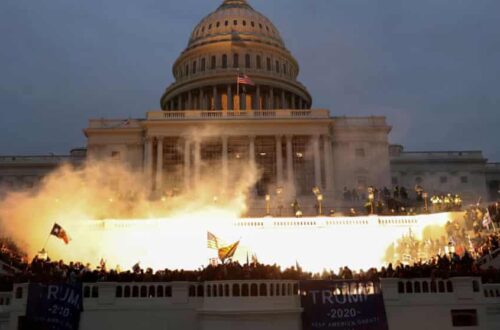