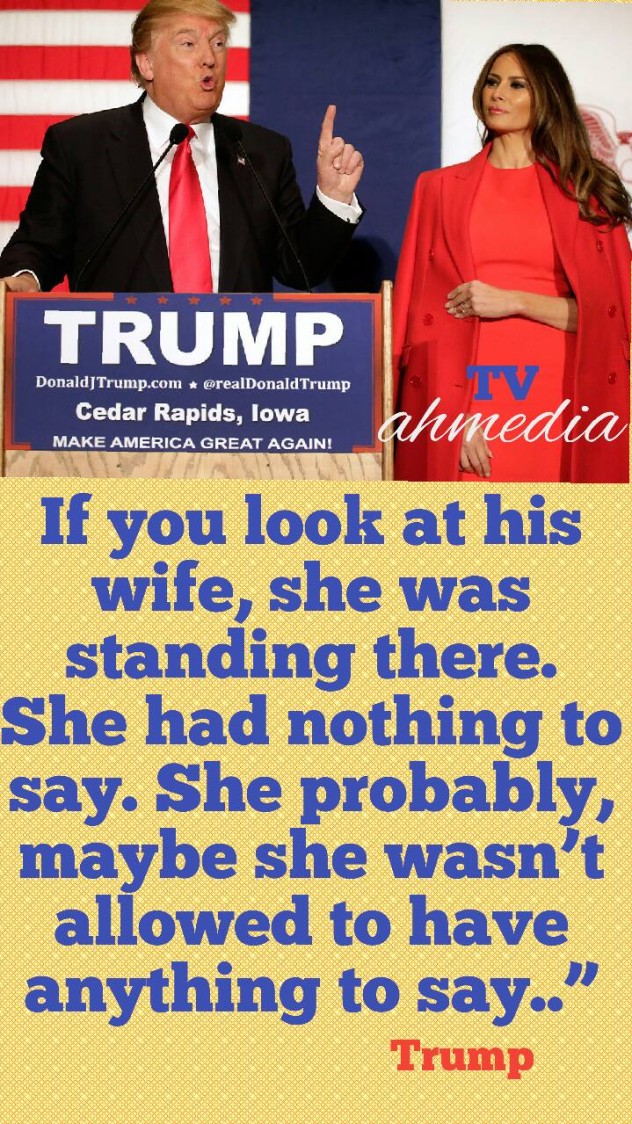 The media’s extensive coverage of Donald Trump’s bizarre insulting of the parents of a Muslim American soldier who was killed in Iraq is overblown. Most of them focused on Trump’s dismissive attitude toward Mr. Khan’s wife who stood quietly while her husband delivered his passionate speech at the Democratic National Convention. He was the choice of the must have Muslim guy, since the Republican convention had one before them.

The father Khizr Khancriticized Trump as unpatriotic and a selfish man who doesn’t understand sacrifices, “you didn’t sacrifice anything and no one,” he scolded Trump. In an ABC interview Donald Trump responded to Mr. Khan by suggesting that not only was his speech prepared by Hillary Clinton’s speech writer, but Trump went on, as he usually does, and diverted the issue of his sacrifices to something else, claiming that, Mr. Khan’s wife Ghazala wasn’t allowed to speak. “If you look at his wife, she was standing there,” Trump said. “She had nothing to say. She probably, maybe she wasn’t allowed to have anything to say. You tell me.” Trump’s attitude toward Muslim women isn’t that much different than his attitude toward women in general. The flamboyant Republican Presidential nominee, who has a propensity to insult women, their minds and body parts, and as Wayne Barrett explained in his column in the NY Daily News, Donald Trump has a history of using women for his benefit and his pleasure. Donald Trump dug deep into his Islamophobic sexist mind and threw a stunner. By suggesting that Mr. Khan’s wife wasn’t allowed to speak, he reinforced another stereotype about Muslim women who, according to him are oppressed by Muslim men, whereas Trump’s women are free as long as they are exploited by him.Trump, the man who himself married three trophy wives who have been used to further his career. In his divorce trial with Ivana, he took the fifth 97 times when asked about his relations with other women. The way I remember Trump, his women usually stand very quiet next him looking beautiful while he is doing most of the talking. In this case, he maybe a closet Muslim women lover.  When his wife Melania talked at the RNC, she used someone else’s writing or plagiarized a few lines from someone else either knowingly or unknowingly. The real issue here isn’t that, Trump was insulting Muslim women, is it that he has been insulting all women in general therefore? Let us look at none other than Fox News’ Megyn Kelly, who accused him of being sexist and reminded him of his disparaging comments about women during the GOP debate on August 6, reminding him: “You have called women you don’t like ‘fat pigs’, ‘dogs’, ‘slobs’, and ‘disgusting animals.” For Trump, western women are free to be used by men, but Muslim women are oppressed by men. Trump’s attitude toward women, Muslim or otherwise, is the same. Trump with all his outrageous tirades of racism, bigotry and Islamophobia reflects the racist attitude of millions of angry white men who follow him. Trump feels their pain and frustration. Trump is the new Forrest Gump, who has the freedom to say whatever is in his mind and tell it as it is. This has its own appeal to millions of his supporters, remember he defeated more than a dozen career politicians by exposing and blatantly attacking them. His outrageous burst against Mr. Khan’s wife triggered a backlash from all corners, Democrats and even Republicans.

Muslim women started a campaign on social media bringing their voices to the national conversation, #CanYouHearUsNow trending where some Muslim women showcased their active and professional lives, breaking the Trump stereotype of Muslim women.

Dalia Fahmy, a professor of political science, tweeted “As a politics professor I lecture to many silent men, because I’m the expert in the room.” Another tweet from Shireen Ahmed, a sports activist and writer, said “Sometimes Muslim women want to speak in public. Sometimes we don’t. Both are excellent choices,” and this really is the crux of the problem with women that Trump has, it sheds some light on the difference between what Donald Trump thinks women’s choices should be. His women may speak, but only to enhance his ego and career. Muslim women may not speak in the presence of a man/men, but what if this was her choice? As Ghazala Khan explained, she just didn’t want to speak and grieve her dead son in public, too personal.

This is something that Donald Trump cannot fathom, a mother willingly missing a chance of a self-aggrandisement, even during her son’s memorial. This is HUUUUGE !

Blogs at “Notes from America” at www.ahmediaTV.com