I took up golfing right after  realizing that  I couldn’t play soccer anymore, couldn’t run, so I took walking as a sport, besides as  a Muslim I wanted to be assimilated.

Growing up in Egypt I had never had a chance to play this illusive game or even come close to being on a golf course. Golf is still an individualistic and very much a disciplined game for someone who played and lived for a long time with the game of proximity and improvisation: the game of soccer. Golf needs a conservative mindset that uses linear thinking. Soccer is more liberal that requires a nonlinear mindset. GOLF is basically a men’s game – as men golfers say – stands for Guys Only Ladies Forbidden, Ha ha ha, don’t drop your beer.

Golf has introduced me to America, a different kind of America; abundance, massive landscapes, remoteness and excessiveness. In my golfing here I have met lots of good people, made lots of unlikely friends. I started playing golf the same way I used to play soccer. I just drive to a golf course nearby and play with anyone available. I come and tag alone with friends and families who need a foursome, just to fill in and keep the golfing line up going. I became the companion for those who need a companion, and a friend of those who needed a friend. I played with that disgruntled family member or spouse who was looking for someone to vent to, for some reason they all open up to me. I’m the neutral guy, their bartender on the golf course, that you can safely dump it all on him, knowing that you may never see him again. Golf transcends race, color and ethnicity; the only thing we see is the color of the green. We are just men in a man’s world, no cultural sensitivity or diversity training required. I’m just another golfer – a bad golfer maybe, but never a bad Muslim.

We met at the golf course last year, he was a big, friendly and bigger than life kind of guy. We limited our conversation to golfer one liner talk, when you miss a shot “It is in the garden”, when you get frustrated “any shot will make somebody happy” he would say. He sometimes gives me a few golfing tips which in golf culture is kind of taboo; friends don’t just give other friends tips on the golf course. Golfing is not a competitive sport where you are competing against each other, you are competing against yourself. We played a few times, we meet every week and just play. In the beginning we tried to avoid politics as much as we could, and my religion or nationality never came to play and never was an issue. Just men enjoying themselves away from work, families and prejudices. We kept the conversation in a good spirit of sports, women, drinks and of course weather. However lately, with the dark political climate and the Trump political daily show spewed everywhere, I have noticed that our conversation slipped into politics. And, yes he thinks Trump would make America great again.

He became possessed with his own prejudices, and didn’t shy away from sharing them with me. He was as his golf swing, a straight shooter, and his unpolitical correctness oozed out on the golf course.

I was a bit taken aback by his refreshing honesty and raw bold demeanor, but was interested  in getting into the mindset of a typical Trump supporter. He is not fond of immigrants and wouldn’t carefully differentiate between Muslims and ISIS. He would preempt his political incorrectness with “Don’t take me wrong.” On the golf course, for him, I had been transformed, he couldn’t see me other than a Muslim, Arab or Immigrant. Regardless of all golf equipments I have , hours of golfing with him, I’m not just a golfer anymore. His conversation has changed, his questions have become an interrogation, his curiosity has become a disguised condemnation and his causal comments have become a racist epithet, For him, I became the cultural cringe. What I say or do requires a stare, reaction, or questioning: “Hey Ahmed, can I ask you something?” that means something has been swirling inside his head for a while. “Why do Somali women come to this country, they keep their traditional cloth and wear that thing on their head,”   –  “you mean Hijab”.. I interrupted. “I call it a towel… (laugh), but Somali men dress up and chase white women.”

For him now I have become the culture attaché for all Muslims and Arabs, and am responsible for all misbehaving Muslims, and somehow not just I understand it, but I can explain it. He couldn’t make any comment without a cultural reference, or some judgment of some sort. “.. you should have taken a faster Camel” he once said when I was late. During the heat of last week, when I was wearing shorts for the first time, his reaction would leap from a bad fashion choice to a cultural epithet, “Ahmed,.. I should take a picture of you and send it to ISIS” he joked. Even with the most universal and culturally neutral topic, like the weather, he managed to find a cultural reference “… Ahmed, you can’t complain about this heat, you came from the Egypt desert.” And when my ball ends up in the bunker, it didn’t earn me any sympathy, which every golfer routinely gets from his fellow golfers, he would manage an ethnic one. “Ahmed, don’t worry, you are good on sand ..right.” “I don’t speak any language other than English” he once confessed, “but how did you learn to speak English?” he wondered. I was speechless. After finishing a round of golf and, as we were getting back to our cars in the parking lot, he approached me and asked if we could play 18 holes next time. I jokingly told him,“hey if we are going to play 18 holes, you may want to expand our conversation vocabulary a little bit.” He laughed, we laughed, and exchanged our phones numbers for the first time. 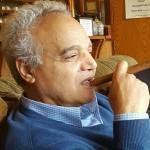