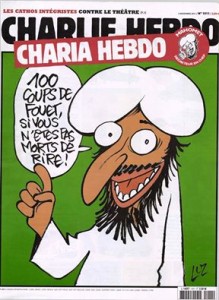 The Funny issue of Charia Hebdo (pronounced like Sharia law, or Islamic law) “guest edited” by the prophet himself. The cover promised “100 lashes if you don’t die of laughter!”

It seems every time a Muslim or a group of Muslims behave badly, the rest of us Muslim Americans get asked to respond to the situation, to try to explain their motives and to react to their horrible acts as if we were experts on terrorism or have special insight on Muslim rage.

We are interrogated and experience something akin to EIT, “Enhanced Interrogation Techniques” and “Forced Condemnation Reaction” of violence and extremism. Don Lemon of CNN, asked human rights lawyer Arsalan Iftikhar, founder of The Muslim Guy, “Do you support ISIS?” Do we need to say the obvious to show our patriotism?

I’m tired of being asked to condemn other Muslims, explain others’ actions and even to spell my name.

I don’t have any answers or reactions that are different from anyone else’s–Muslim or non Muslim. As John Stewart put it on his show “…not to make sense of this because there is no sense to be made of this.” Rather the goal was, as always, “to keep going.”

The media condemnation came swiftly. The knee jerk reaction of the media to the #CharlieHebdo tragedy was to put Islam on trial and to condemn 1.6 billion people. This became the headline of all 6’o’clock news shows. The #killAllMuslims social media trending reached more than100,000. How did this all start, and how did we reach this madness?

It was around 11:30, PARIS — Stéphane Charbonnier was in his editorial meeting with his staff, like every Wednesday morning, at the French satirical magazine called Charlie Hebdo. The rest we know from sources like the New York Times, who went for the kill describing the “orientalist clash of civilization” event in a minute-by-minute update of the horrible attack.  I quote, “Unbeknown to them, a scene of terror was unfolding at their doorstep — one that would grip the world’s attention and set off new fears across Europe about a rising clash of civilizations, between radical Islamists and the West”.

The Guardian was more modest in its outburst, with a front page headline “An Assault on Democracy.” Then we have the Muslim apologists:  “Religions, like all other ideas, deserve criticism, satire, and, yes, our fearless disrespect,” vented #SalmanRushdie. And more,

“… the relentlessly murderous soul of radical Islam has attacked the very foundation of Western civilization.

…” noted NY Daily News featuring another cartoon of its own, depicting a vicious looking bearded man–apparently a radical Islamist–standing with his pointed sword toward a hand holding a pen with a caption, “STILL MIGHTIER”

Thousands of Muslims are killed every year by our own military expansionism  and lust for power, freedom of speech are shot down everyday by Arab Muslim dictators that we support, Insulting Islam in Saudi Arabia id flogging, but those of us who are writers will not consider our pencils broken by such killings. But that incontestability, that unmournability, just as much as the massacre in Paris, is the clear and present danger to our collective liberté.”

Bill Maher’s vitriolic rants about Islam have become the talk of the town, and the atheist comedian has become the darling of the nuts on the Christian right. Within hours of the Paris attack, he ridiculously claimed that “… millions of Muslims support the Charlie Hebdo Attack.”

The talking heads all over the 6 o’clock news described the attackers with words that are usually reserved for Muslims and non-white villains, words like, barbaric, uncivilized, Islamic extremists, and jihadi.

Thousands of people in France and around Europe gathered to march in vigils of solidarity holding the sign “Je Suis Charlie” or I’m Charlie.

This hyper-reaction of the Western media reflects self-righteousness and universal absolutism, much the same extremism as the dogmatism and paranoia that Muslims extremists fall in. One camp gets its venom from religion fundamentalism while the other gets it from secular fundamentalism, where nationalism has become the new religion. As photographer Teju Cole noted in the New Yorker,  “Voltaire, a hero to many who extol free speech, got it wrong. His sparkling and courageous anti-clericalism can be a joy to read, but he was also a committed anti-Semite, whose criticisms of Judaism were accompanied by calumnies about the innate character of Jews”.

In fact, for anyone interested, condemnation of the attack by Muslims came from all over the world, a fact ignored by CNN and Fox News. Muslims don’t condone such an act or the killing of innocent civilians, and may deny or react in disbelief that a Muslim could be capable of such actions. Some may suspect conspiracy, such as one frustrated Egyptian TV host who vented, “…, it is the act of the French state to crack down on Muslims in France and a prerequisite to get involved in North Africa.”

Those who like to believe that #‎charliehebdo attack is a direct reaction to the insult of Islam or the prophet through satirical cartoons don’ get the whole picture.  According to Saudis, if attackers were truly Muslims they would have just flogged #CharlieHebdo

This isn’t just about cartoons of the prophet any more than rape is about what the victim is wearing.

When a crime is committed by a Muslim, it is seen by the West as sociologically and culturally-based and the entire culture is condemned. However, a crime by a Westerner is seen as deviancy by an individual, as a psychological problem, like in the Columbine, or Newtown massacres, or Atlanta bombing. Sky News reported that a 38-year-old German male nurse, identified only as Niels H., admitted to killing at least 30 patients between 2003 and 2005, because he was bored. This kind of aberrant behavior is usually presented as just an act of a disturbed individual who lived outside of mainstream culture, not an assault on Western civilization or on the rights of people to be sick!

Letting a few criminals define a billion and half Muslims is absurd and dogmatic.

The Charlie Hebdo tragedy can’t be explained by religion or culture; it is only explained in the sick minds of the killers alone, not the Charlie Hebdo cartoon. Many Muslims saw the cartoons from the satirical magazine but were not provoked and managed to stay calm.  Don’t Snipe-Unsubscribe.

Published in Other Media

Ahmed Tharwat …. a host and producer of the Arab-American TV show BelAhdan with Ahmed, a Writer, Public Speaker, blogs at www.ahmediatv.com

Can be reached at