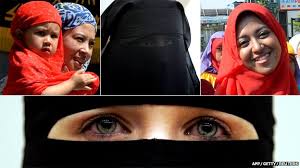 Hijab, the traditional Islamic head cover, has triggered lots of discussion and debate in the west for years, The west has been paying so much attention to Muslim women’s dress than Muslim women’s mind. Muslim women’s hijab comes in so many different sizes, colors and styles, depending on the country, person and culture, from partially covering the head, to the Full Monty of the Burka/Niqab which covers the full head and face except eyes.

Why the west is paying that much attention to Muslim women Islamic tradition cloth, only God and Victoria’s Secret know. The perception of hijab in the west ranges from a symbol of oppression of Muslim women by men (not an Islamic thing) to rejection of assimilation to mainstream consumer culture, labeled by some as head towel, cancer patient, to a terrorist cloth. The word hijab literally means screen or divider, but is most often used to refer to the covering of Muslim women, particularly the scarf she wears to cover If you ask Muslim women themselves, about their reasons of wearing hijab, you get different ideas and perspectives, that truly reflect diversity in cultures and personalities, reasons like ‘out of respect,’ ‘religious requirement,’ ‘uniformity,’ ‘beauty,’ ‘keeping men’s advancements at bay,’ ‘less diversion (from a certain norm?),’ and ‘for modesty’ are probably the most frequently mentioned. God asks us, men and women, to be modest in our demeanors and appearances. “I myself don’t like to be stuck in something (hijab) that blocks the air from my ears just because i have to!” Esraa Farouk, a 19 year old, college student at Cairo University (who herself wears hijab) told me in a facebook conversation!.

Some Muslim women will wear hijab only to mosques, or funerals, and others wear hijab all the time even at bars while drinking alcohol. A friend told me once that his Muslim girlfriend won’t take her hijab off even while they were making love. Some Muslim women wear hijab on top of modern revealing clothes, miniskirts, short sleeves. I noticed on my visit
to Cairo university in Egypt that students with hijab wear more tight skirts or pants than those who don’t.

The American fashion industry is controlled mostly by men spend millions of dollars every year to tell American women what to wear or not to wear, but there is not much serious debate about western women revealing their bodies as much as Muslim women covering her bodies. Nobody would question the commercial oppression and beauty mystique that Corporate America so imposes on western women that they struggle everyday to get the right body size and the right balance. How do Muslim women really look at hijab, and what does hijab mean to them? What they tell you is something you would not hear or see on CNN and Fox.

I first paid attention to how different Muslim women look at hijab when I visited my family in Egypt, which is in on the conservative side (salafi you could say). Friends and relatives usually come to our house to say hi. At the room you can see my brothers wearing their long robes, long beards, and see their wives and daughters all wearing hijabs no exception. The hijabs reflect their personalities, age and lifestyle. Each niece has as many hijabs as she has moods: happy, colorful, black, red, or yellow. Based on the situation and whom they are going to meet, hijab reflects that: wedding, dates, coffee shops, work, funerals. Each occasion requires a different fashion decision. Wearing hijab at home has its rules and etiquettes.

The girls take their hijab off once they get home to relax, like American men taking off their hats in the 1950s, then you hang your hijab once you get into the house.

. Having Hijab on or off inside the house, will depend very much on who is in the room and that person’s relationship to the family. As a general rule, if you ‘can marry’ the person in the room you wear hijab. There is no jihab between brother and sister, for example, because a marital affinity between the two is not possible.If it was a relative you can’t marry, you don’t have to cover, but you still can keep it on if you choose to. If I’m the only person in the room, my nieces take their hijab off, then depending on who is coming to visit at the door, the hijab will be back on, for some nieces and off for others. If the visitor is a male to begin with and a brother of some of then and not others, his sisters can keep their hijab off, while other nieces have to keep theirs on.

In Texas, where marrying cousins is acceptable, the cousin is a stranger and the hijab is on.. Like a designated driver for a night out, my family has a designated snitch, or an informant, usually a male person who opens the door based on the guest’s gender and relationship to the family, he then gives a visual signal, raise his hand up or down, meaning off or on, directed at a particular niece to become ‘hijab ready.’ In some cases, it would happen so fast, when people are coming and going, then it gets confusing, as to who should have hijab on or off, and if you can’t find your own hijab, quickly grabs a hijab off the head of one who does
not need it at the moment. Give me your hijab; it is your brother, then everyone starts giggling and joking, the visitor enters the room, full of women who are hijab ready…. !!