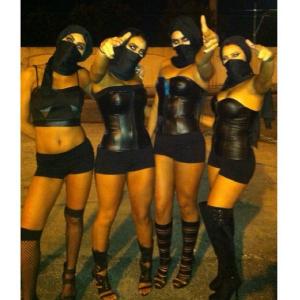 Halloween is one of the biggest party holiday on American calendar, ranking third behind New Years Eve Parties at number one and Super Bowl parties at number two. In terms of consumer culture, The Huffington Post reported, that Halloween ranks right behind Christmas in the amount of money people spent on it, about $6billion ever year, $4B of it on costumes alone. . Halloween supposes to be a fun secular holiday enjoyable to anyone despite his or her personal cultural or religious beliefs. The Halloween season remains a yearly celebration and the fun of wearing costumes is a huge part of this cultural festival. Each year we see infusion of new costumes based on our own pop culture and our entertainments industry mandate, however world events and wars plays a role in American Halloween costume celebrations. It seems based on the country with which we are having a war, our war machines propaganda, tends to demonize our enemies to rally the Americans people around wars, ..exp. Germens, Japanese, Vietnamese; and Halloween costume used to reflect our attitude toward this countries and its people. In the last 30 years or so most of our wars are wagged in countries with majorities Muslim populations which makes Arabs and Muslims an easy target for Halloween costumes fun. And culture caricatures. Costumes that range from, Ayatollahs, Taliban fighter, Hamas, to Arab sheicks, and hijabs,. Halloween party, which also called a masquerade party is a day where millions of Americans let their hair down sort to speak , and show our inner selves celebrate our ignorance and bigotries . Halloween costume moved from mythological scary caricatures, witches, monsters, superman, pat man, to more of cultural appropriation stereotypes costumes. Native chief, red nick, wicked greedy Jew, to Arab sheikh. According to Wikipedia: cultural “appropriation” or “misappropriation” refers to the adoption of these cultural elements, taken from minority cultures by members of the dominant culture, and then using these elements outside of their original cultural context. This cultural property may be forms of dress or personal adornment, music or art, religion, language, intellectual property or social behavior, all of which may have deep cultural meaning to the original culture, but may be used as fashion by those from outside that culture.
“Cultural appropriation is itself a real issue because it demonstrates the imbalance of power that still remains between cultures that have been colonized and the ex-colonizers.” Explained Jarune Uwujaren, a Contributing Writer for Everyday Feminism.
And she went on to explain that, “One of the reasons that cultural appropriation is a hard concept to grasp for so many is that Westerners are used to pressing their own culture onto others and taking what they want in return. In the post ISIS craze era that swept the western psychological landscape, with media hype and social chatters, people find it amusing to wear ISIS costumes in so many take and interpretation, and actually posted them on social media. You are not going to find an Arab/Muslim being that amused or daring to wear ISIS costume this year, only white folks have the privilege to have fun with ISIS costumes. The host of one of Halloween party that I was invited to, asked me about my costume this year, I jokingly said ISIS costume, suddenly, more than 20 years of friendship almost wiped out on the phone.
Looking on some of the ISIS costumes posted on the social media , Women and men wearing them, young and old, but the overall arch images used in the ISIS Halloween costumes, that bring them all together, man always fully covered, even the face with Niqab, but women almost always, are wearing scantily tight black leather costumes with guns in her hands, not sure about leather and jihad, something only those people know, women ISIS still a sexy object with a gun, men look like cool gangsters, gothic, in one of the costume, you can see a man wearing black ISIS dress, with hip hop jacket, holding a young woman wearing a very tight leather short leaning on him in a seductive way. ISIS western woman hasn’t given up totally on her sexuality even during her jihad. These ISIS costumes doesn’t really tell the whole story about ISIS, or teach us anything about Islam or Muslims, these ISIS costumes reducing a rich divers culture and history to just a simple stereotype of a complicated historical phenomenon, that Muslims themselves don’t understand and  grapple with .
The Halloween ISIS costume doesn’t not just appropriate the Muslim culture, but also it appropriates western women body as ISIS does; where ISIS men cover their women’s bodies, and western ISIS uncover them.