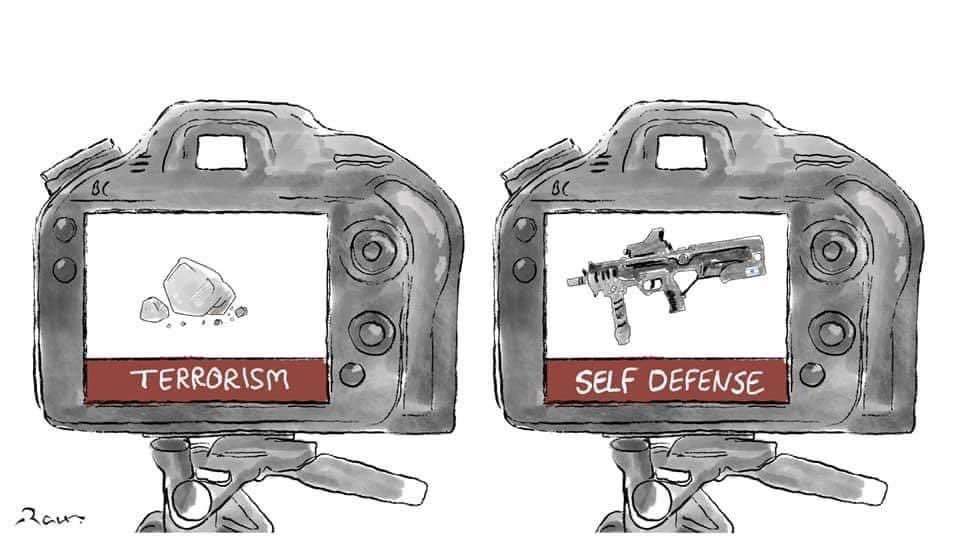 Benjamin Netanyahu, the Israeli PM who ordered the bombing and the destruction of Al-Jalaa Media tower in Gaza marched with over 40 world leaders in “Paris Unity March” to show unity and support to protect Press Freedom after the attack on satirical magazine Charlie Hebdo. Leaders who attended the “Paris Unity March” in 2015 are now silent on the bombing of the Media tower in Gaza. Almost 3 million people took to the street of Paris in the unity rallies in solidarity with the French Magazine in its crusade in insulting the Muslim prophet. “Paris is the capital of the world today,” said French leader then Francois Hollande. “Our values are liberty, equality, and fraternity, and we cannot allow terrorists to dictate to us,” said one of the protestors who took part in the Paris Unity March. Netanyahu was seen in the front of the Unity March holding hands with other world leaders poised and undeterred as an equal partner in protecting freedom of the press and journalist.

The media in the self-declared the only democracy in the middle east must comply with prior Israeli military censorship and gag order, investigative reporting criticizing of military looked at as national security and virtually not allowed. Now millions of people around the world watched in salience as Israel missiles hit the media towers and destroyed them. There is no unity march, no strong condemnations of the illegal attack on the freedom of expression, the tower hosted the only voice left to tell the actual events in Gaza, including AP, Ruiter, and Al Arabiya. Aljazeera, which ironically was bombed by the American military during the invasion of Iraq!! Western media coverage of the latest slaughtering of the Palestinians and the bombing in Gaza bend over backward to accommodate and adapt the Zionist narrative; present the onslaught that killed and injured hundreds of Palestinians, destroyed residential buildings, and whipped out a whole neighborhood in Gaza as clashes, perpetual meaningless violence that results in causalities on both sides, and it is a conflict between equal sides and the attacks on Palestinian is always a reaction to an attack from the terrorist, militants Hamas and a fight between Israeli forces and Palestinian Militants. None a single Hamas or so-called Palestinian militant was in Al-Jalaa media tower in Gaza, only journalists, and their media gears, who were told they have a few minutes to evacuate the building before the Israeli missals reined in. The corporate media report assaults on Gaza and the Palestinians without context or history. A regular reader of mainstream media here would not know that it all started when white settlers escaping the persecution of Europe came and took over the Palestinian lands, started the ethnic cleansing of native Palestinians in 1948. Now they control the water, air, land, electricity, and freedom of movement and turn Gaza into an open prison to the two million Palestinians trapped there. The New York Post headline blamed Hamas for the attack on the Palestinians “Hamas fires rockets into Israel as tensions in Jerusalem boil over,” which was a headline shared by other media from NBC. “Jerusalem violence leads to rockets, airstrikes,” another from Reuters. Financial Times explained to its readers the reason of all this mess with a headline; “Hamas rocket attacks provoke Israeli retaliation in Gaza”. CNN is showing its authority on fake news with this coverage: “Tensions between Israelis and Palestinians have escalated further on Tuesday as Palestinian militants in Gaza fired hundreds of rockets into Israel, which in turn ramped up airstrikes on the coastal enclave.”, The New York Times informs us that “Attacks continues Across Israel and the Palestinian Territories” showing in the frontage a picrite or damaged building in Israel, next to it a picture of dead Palestinians. The New York Times columnist Thomas Friedman, The Big Idea man is at it again… blaming the Palestinians resistance on the Tik Tok, “Let’s see, what happens when TikTok meets Palestinian grievances about right-wing Israeli land grabs in Arab neighborhoods in Jerusalem? And then you add the holiest Muslim night of prayer in Jerusalem into the mix?” Palestinians have been resisting the apartheid Zionist Occupation before even the internet existed! Social media giants Twitter, Instagram, and Facebook deleting posts critical of the Israelis attacks, later blaming it on the digital glitch. The moral bankrupt of the apartheid Zionist project in the Middle east is crumpling, the Palestinians still determined to resist, they have the right to survive,  survive. “It seems that we have passed the point of no return, and it is possible that Israel can no longer end the occupation, stop settlement activity and achieve peace, and it seems that it is no longer possible to reform Zionism, save democracy and divide the Prime Time Zone in this country”. Wrote the Israeli writer Ari Shebet  in Haaretz. The problem we have right now, that terrorism is committed by elected officials and heads of states, using Armies, tanks, F-16, and billions of dollars budgets.

My Interview with Tom Shoemaker, founder, and director of the American Support Network for Palestine

Read it at The StarTribune