Arab Americans finally got their month, the State Department designated the month of April as Arab American Heritage Month, recognizing Arab American’s contributions to the US! “The United States is home to more than 3.5 million (more like 6M) Arab Americans representing a diverse array of cultures and traditions. Like their fellow citizens, Americans of Arab heritage are very much a part of the fabric of this nation,” Ned Price, a state department spokesman, said in a video statement on April 1, honestly, I thought it was another April Fool Prank. “, So if African Americans got the shortest month of the year, Arab Americans got the one that starts with a fool.

Arab Americans have contributed in every field and profession, many of them, in fact, serve here at the State Department and throughout the interagency.” He added. This is a departure from the dark history of American hostility toward Arab Americans, especially after the 9/11 tragedy. Arabs have been demonized, marginalized, and stereotyped in American media, literature, and Hollywood films for so long. Unlike the Jewish story, the Arab story never had a chance in the American narrative stage. People like the self-hated Arab scholar Fouad Ajami and the intellectual sellout author Salman Rushdie joined modern orientalists Bernard Louise, Daniel Pipes,  and Raphael Patai to explain the Arab terrorist mind to the American people and the state department homeland in-Security. America adopted this European old orientalist mindset that paints Arabs as irrational and dangerous, you can’t trust them, they are prone to violence and only understand power. This is the same racist attitude that Americans have toward blacks for more hundreds of years. As you can see in the trial of Derek Chauvin’s killing of George Floyd. Eric Nelson, the attorney for the cop who killed George Floyd. “This was not an easy struggle,” asking the jurors to visualize the event like a fight between the poor Mr. Nelson and Mr. Floyd the dangerous black man. “Mr. Chauvin stands 5-foot-9, 140 pounds. Mr. Floyd is 6-3, weighs 223 pounds.” He explained. Bringing what Mother Jones explained in “The Myth of SuperNegro to the court”  black men strong and can sustain lots of pain.  Edward Said, the most influential Palestinian American intellectual in the 20the century, explained in his groundbreaking book Orientalism ; the west seeing Arab culture as exotic, backward, uncivilized, and dangerous. The Arabs/ Orient is extremely different from the west/Oxidant, and they needed to be colonized to be civilized. Orientalists went to the east with their pens, notepads, camera, and canvas to redrew Arabs in their own images.  In an interview with Dr. Timothy Brennan, a Professor of comparative literature, cultural studies, and English at the University of Minnesota, talked about it in his new book, Places of Mind: A life of Edward Said, “Orientalism, according to Edward Said is all about representation, it was a reaction to the proximity of the enlightened Arabs (moors) in the south during European dark age,” he explained. Europeans perceived Arabs/Moors as a threat and needed to be tamed. Honoring Arab American Heritage Month. here is a public service from a good Arab American citizen a non-orientalist view of Arab Americans, a crash course of “Arab Americans for Dummies” for those who don’t have the time to read Said or Brennan. Arabs came to America in the late 18th century, mostly Christians from the Levant, “al-Sham” which was called grand Syria Palestine, Jordan and Lebanon now, later came from the rest of the Arab world, Egypt and North Africa. Early Arabs were not identified as Arabs, and they were called Turks since the place was under the Ottoman Empire. Arab immigrants were mostly illiterate came to America escaping religious persecution but mainly came for economic opportunity. They only came to stay for a short time, make enough money then go back home to their families, however, the majority ended up settling in major cities all over the US. Arab immigrants, like other immigrants, came to America with their hopes, religions, traditions, and values that shape their lives in the new home. However, the factor that played a major role in Arabs living in America is their language, Arabic! Great linguist Noam Chomsky has a theory when it comes to language learning, our brains are wired with the universal ability to learn and express the world around us, easy at an early age, however, learning a second language as an adult is hard. Arab immigrants learn the English language with the structure built on their own native language Arabic, which affects how they speak, think, and have relationships! The Arabic language is poetic, generous, and tolerates excessive emotional fervors, they seem to exaggerate a bit as an art form; I always tell my daughter to divide her Arab American friend’s compliments by four to get to the right decimal level. For Arabs, everyone is “Habibi” Arabic, for my love, although Arab language is full of superlatives that are giving to anyone deserved or not. Arab men have no problem showing their intimacy in public considered socially gay; they kiss and hug each other; however, when they fight, the primary aim is not winning the battle, but winning public sympathy. Arabic Alphabet has 28 letters but doesn’t have the letter “p” only “b”, hard to pronounce for most Arabs, for them the ‘p” is one with the stick is down and “b” with the stick is up. My Egyptian English teacher spent the whole school year trying to teach us the difference between “p” and “b”, putting a few shredded pieces of paper on the palm of his hand and brought it closer to his mouth to show the difference effect, when he said, “p” the shredded papers flew everywhere; apparently, the “P” letter, unlike “b” comes with air, students missed his point. Arab Americans avoid words like Mississippi, people, police, or pumps. Arab Americans at restaurants order Coke, not Pepsi, and Dr. Peppers gets no respect. More likely to order big Mac, over Whoppers. They make Pizza at home but won’t order Pizza out and they smoke Shisha, not Pipes. They avoid dating Paula, Pam, Patricia, Poly; however, Nancy Jean, Jan, Kate, Sally, and Caren; are the lucky ones. They seemed to get more parking tickets; for barking at the wrong tree. For politics, Arab Americans are politically homeless, the two parties don’t address their concerns. So, when Polls show that there are more Arab Democrats than Arab Republicans; when talking to strangers, for an Arab American, it is easier to say; I’m a Democrat than I’m a Republican, the “p/b” thing again, the one with the stick down!

His Articles Published in national and international Publications

Read it at the Star Tribune 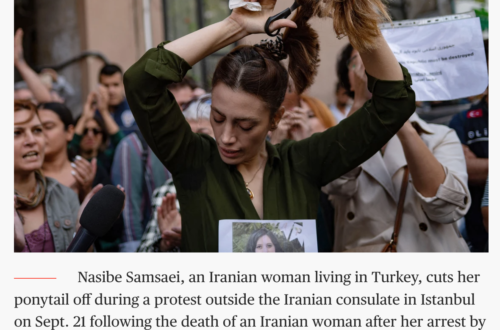