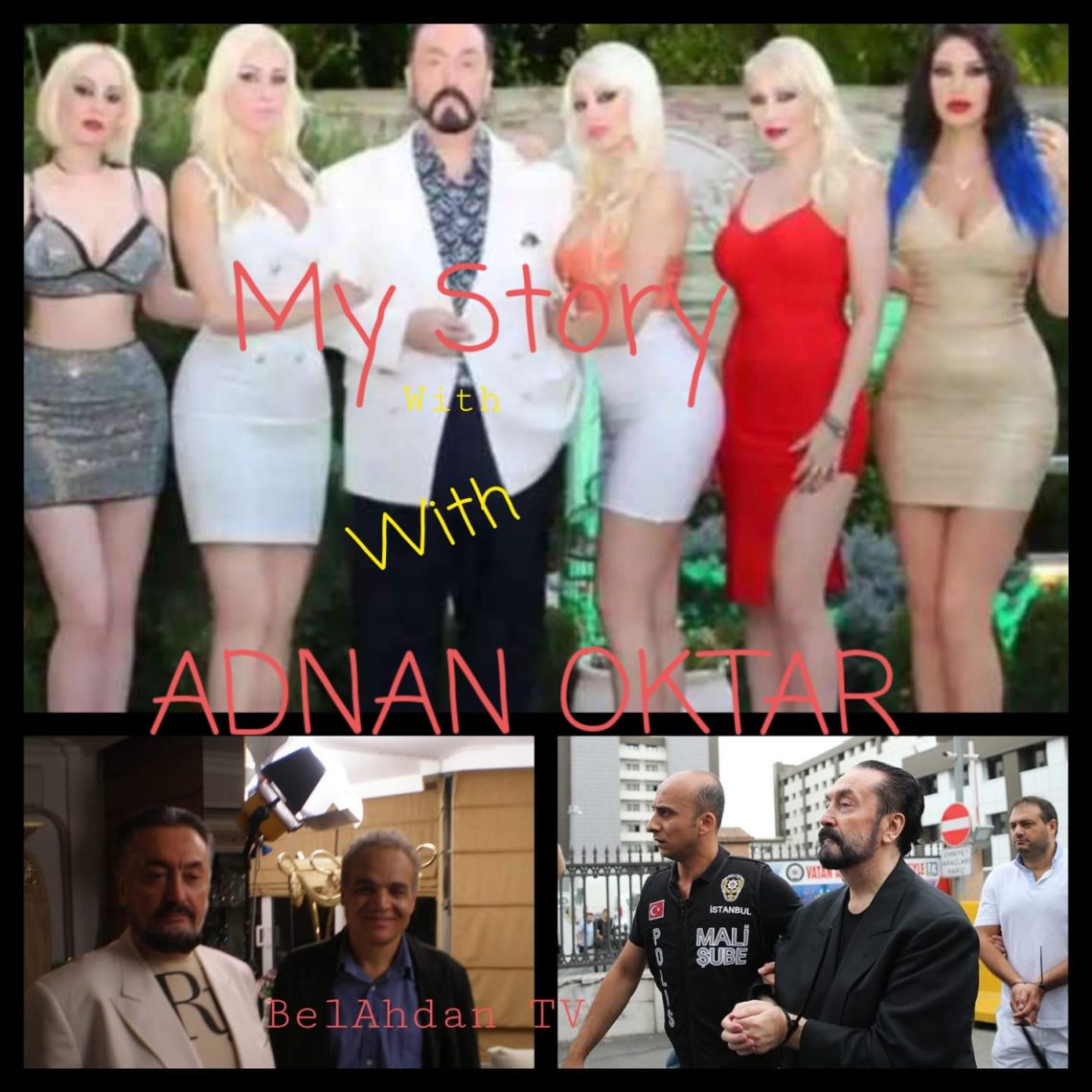 The Turkish TV evangelical and controversial preacher Adnan Oktar was sentenced to 1075 years in prison by the Turkish authority. To put this in perspective, by the time of his release, Nancy Pelosi would be working on getting congress to Impeaching Trump for the 500th time.

According to Turkish media, the 64-year-old  Mr. Oktar is accused of crimes ranging from sexual abuse, sex with minors, sexual assault,  fraud, political and military espionage.  Mr. Oktar a controversial figure, has a TV network where he preaches his views and ideas, at times surrounded by scantily clad young ladies with bleached hair and bodies dancing around him in the studio.  Mr. Oktar, who goes by the pseudo-name Harun Yahya, made his name on the international stage after he wrote 800 pages glossy 12 pounds book, “Atlas of Creation,” to contest “the perverted” Darwinian evolution book the Origin of Species, from an Islamic perspective.  The book was unsolicited sent to scientists, congress, schools, universities, libraries, science museums worldwide, even to the University of St Thomas where I was teaching. “Come and take it if you want is taking half of my library,” The head of the theology department told me. My story with Mr. Oktar started on September 12, 2008, at 4:12 am when I received an email  …

Dear Ahmed Tharwat,
I’d like to offer you a special report or an interview with the prominent Muslim scholar Mr. Adnan Oktar.. Mr. Oktar would like to deliver his unheard and important views through this interview. And we would like to invite you to Turkey, Istanbul as our guest….” The email provided links to Mr. Yahya’s works, writing, and other interviews such BBC, Aljazeera, Baghdad, Saudi TV, Turkish TV, Iran Press, … and continues “We will be very pleased if “we could also make this interview with you insha’Allah. As the interviewer, you may decide on the subjects according to your questions. And he is open to all of your questions in any aspect. You can discuss the topics like creationism&Darwinism, religion, science, politics, economy and other social problems, Islam, Christianity, Judaism, Turkish foreign politics, his views about US and European strategies, Middle East problems, Islamic Union, European Union, atheist Zionism, Freemasonry, the impact of his works and the psychological war he faced throughout his life etc. You can also learn about his deep analysis relating Turkey like Ergenekon case, and the communist deeper state in Turkey, AKP closure case, latest terrorist attacks, headscarf issue, PKK terrorist events, solutions for the chaos in Iraq etc. You will hear different analysis and solutions for all the ongoing problems.
Awaiting your soonest reply.” (SIC)

Providing her Email, Phone, and Skype Name..!.. was before Zoom and Pandemic took over the conversation.

I never heard of Harun Yahya before. So like any serious investigative reporter, I googled his name.  The top results were shocking,  images and videos of Mr. Oktar on the beach,  always surrounded by young women calls them “Kittens”, flashing his lavish lifestyle of a TV evangelical. The reviews of Mr. Yahya were a mix, suspicious from the scientific community and farcical from the mainstream media. Franc banned his books from schools, but in the United states As The New York Times reported, “… didn’t take him seriously,” “In our country, we are used to nonsense like this,” said Kevin Padian, an evolutionary biologist at the University of California, Berkeley, who found a copy in his mailbox. “People who had received copies were just astounded at its size and production values and equally astonished at what a load of crap it is.” He explained. Mr. Yahya must have a story, and I got to hear it. I’m a storyteller and not a journalist. So after a few phone calls and emails with Ms. Aral, they set me to travel to Istanbul in December 15 to 18 for a three days visit to interview Mr. Oktar and accompany him to a few places of his choice. Full of trepidation and curiosity, I took over from Minneapolis to Amsterdam, four hours’ layover then off to Istanbul.  I arrived in Istanbul on a chilly afternoon. Emery, a young gentleman was waiting, greeting me with a smile took my luggage, and drove me to Megara Palace hotel. A family-owned cozy hotel,  a small stone building where an old piano in the middle of the hall, black and white pictures of the owner with celebrities he met. Including Jacklin Kennedy and Helmut Schmidt (Former Chancellor of the Federal Republic of Germany). Emery seems familiar with the Hotel as he had been before many times, briefly talked to the manager, and ready to lesve “Ill see you tomorrow” . The Manager took my luggage to my room, dark small with a window overseeing a neglected citadel structure, a reminder of an old empire that was confident and sure of itself. I was tired, went to take a shower; the bathroom had an old-style “Shattaf” bidet which instantly made me feel at home. After the shower,  I took a long nap, woke up late in the evening, well-rested but hungry. A sign of a restaurant on the hotel rooftop, following a soft Turkish music trail showed me the way to the rooftop restaurant. The place was empty, no one was there except a man smoking Shisha and drinking tea. “I’m the new owner, we are turning this to a seafood restaurant,   there is no menu, but I can make you our fish special”. Absolutely, thanks.  He disappeared in the dark kitchen, came back later wearing a disappointing look on his face , “I’m sorry the oven is not working, I promised you the fish dish tomorrow  Insha’Allah,.  We sat down listening to Egyptian diva um-Kaltoum old songs that filled my souls and stomachs with memories. every day when I ask him about the fish dish, it was always tomorrow Inshallah. The next day I wok up earl,  took off to see the city on my own, walking through the stoned street surrounding by aged buildings, It seemed that I got Istanbul city all for myself, streets are empty, shops are closed, even Istanbul Starbucks, only seen well-rested dogs and cats on sidewalks, pigeons peacefully dancing everywhere. It was the first day of the Muslim Eid al-Adha celebration, where everyone was at the mosque for early Eid prayer. I went to the Blue mosque where a caravan coming out of the mosque, kids with families, traditional foods lots of hugging and kissing. I entered the almost empty great mosque; to find a long line of people waiting to shake the hand of a man sitting at the front by the pulpit.  I started taking some pictures, quickly a plain cloth security man approached, No, No waiving his hand.  So I knew it was a high government official, Got into the line, waited for my turn finally I found myself shaking the hands of the mayor of Istanbul. The next day off to meet Mr. Oktar at his studio for the interview; Emery, came to pick me up., we talked about Turkey and Egypt’s historical connection, as he drove through the old city, then we came to a long bridge between the eastern and western quarter. We finally arrive at a forfeited compound with a Soprano style gate.  A five or six young men were waiting inside the long hall, massive chandler descending upon us from the ceiling; we stood in the middle of the big room waiting for Mr. Oktar, 10/15 minutes later, someone announced his arrival. A tall man with a well-kept black beard, an off-white designer suit, over a light t-shirt with a big Armani Logo.. Mr. Oktar shook my hands with a firm grip that lasted a few seconds than it should.

-“You have an American smile,” he said.

-Well, I just came from there to talk to your excellency.  I replied. 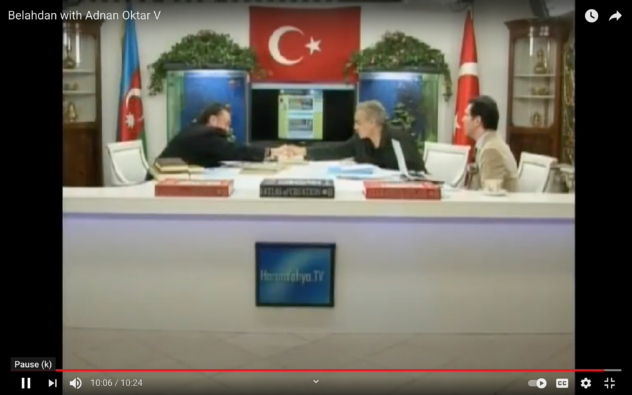 They led us to a big studio to realize I can’t use my camera. “The interview will be taped without a live audience, and we will send you the tape, the producer explained. The interview was conducted with an interrupter; everyone took turns waiting for the translations, which took the conversation’s intimacy. I tried not to dwell on the sexual and scandalous allegations.  I started by asking him if he would consider himself a preacher, scientist, or a movie star. “I’m Harun Yahya, servant of Allah. he quickly replied with a smile.”

-Here in America, and lots of Scientists don’t take what you say seriously.”

-There is always a conflict between religion and science; Turkish Islam is the solution for this conflict; we have enough conflict through history, peace not war!” he explained.

He talks a lot about the revered Imam Mahdi and his 300  followers who would bring Turkish Islam to the world and bring Christens, Jews, and Muslims together, no conflict anymore.

_With the internet and cluttering media, how would Mahdi’s message go to cut through the clutter? I asked.

-With our dedicated Turkish Islam, we will defeat Europe and America, and the Mahdi message will finally prevail; Allah is willing.”

_ You talk so highly of women, surrounding yourself with young beautiful ones, why are you not married yet!

_ “I’m too busy to get married. I have a big mission to finish,” he explained with a serious tone.

_ Not more significant than the prophet’s mission, and he was married to more than one woman. I said jokingly, which only got a crack of a smile.  I was grateful that I finally met Adnan Oktar; the Armani Preacher was charming with celebrity pizzaz. He was calm and soft-spoken, a Sufi searching for inner peace with celebrity pizzaz. I tried to be fair and curious!! At the end of the interviews, I asked him if he would be willing to come to the US and talk to the American people directly,

-“ Yes, I would love to come and talk to Americans, they are high-quality and joyous people“ (SIC) ..”.

-Maybe I should send you an invitation!!

– I’m  forbidden from traveling,  when the ban is lifted, Insha’Allah ”

Later as we were leaving, a young man came with a gift from Mr. Oktar, a heavy Treasure Chest made out of cast iron/copper with a rusty look;. I looked around for Mr. Oktar to thank him, he was already gone. Now I have to wait for a long time. to thank the Armani Preacher.

My interview with Mr. Oktar

the interview was an hour plus, they only sent me 10M