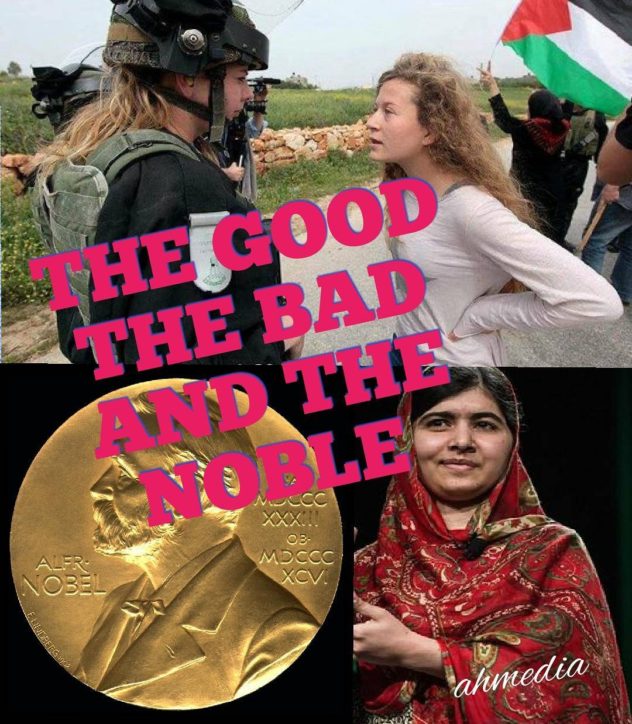 The gruesome images of the arrest of young Palestinian children by Israeli forces have been with us for years which increased since the first intifada of 1987. However, the arrest of the 16-year-old Palestinian, Ahed Tamimi was a reckoning symbol of Palestinian resistance to the Israeli occupation and the harsh treatment of the Palestinians. The image of her arrest, a young brave child, surrounded by the scorch of Israeli soldiers with full gears, looks like a seen from the force of evil and good epic movie. He arrest video went viral on social media and got lots of attentions in the Arab world, however it didn’t get as much attention here in the western media and  Trumpland America was busy with holidays shopping
Ahed, was protesting the shooting, in the head, of her 14 year old cousin by Israeli soldiers in a raid on their home, which ended up with her mother and cousin being arrested. The overwhelming force that Israeli soldiers use to humiliate Palestine children has been documented by UN and human rights organizations, but has never got the attention that the young Pakistani Malala got.

The 16-year-old Pakistani student was attacked by the Taliban (our enemy), whereas the young Palestinian, Ahed was attacked by Israeli forces (our friend). Malala was attacked and shot by a Taliban fighter while riding the bus home from school in the Swat Valley of northern Pakistan. Ahed was arrested and put on trial in a military court for protesting the shooting in the head of her cousin.
Ahed and Malala are both Muslims and were both victims of bigotry and a self-righteous mindset, the demonizing of Arabs as Oren Hazan, an MP of Prime Minister Benjamin Netanyahu’s Likud Party, confronting a Palestinian family with verbal intimidation stated; “Your son is a dog, he is a dog.” This kind of apartheid racist culture that dominated the relationship between Israelis and Palestinians has given Israeli a free hand to abuse and kill Palestinians without remorse or ramifications.
The unarmed struggle led by Ahed has been seen by the Israelis as a threat to Israeli national security, Educational Minister Naftali Bennett stating on Israeli Army Radio that the young women filmed slapping the solders “Should finish their lives in prison”…“you won’t see your son or husband. And if you keep on like this you won’t see life anymore.” He continued to threaten the Palestinian family who are vesting their detained sons, something now practiced routinely in prisons under the dictatorship of el-Sisi in Egypt.
Ahed, the young Palestine, like  Malala, has a history of peaceful activities against occupying Israeli forces’ crimes and protesting injustices at a younger age, these against the arrest of her brothers and family members by Israeli forces. However, she never got the attention of the west as Malala did. In 2014, Malala received the Nobel Peace Prize. She was the poster child of oppressed Muslim woman, continually in the western spotlight, spoke at the UN, and visited the White House. She wrote books, made movies, and even met President Obama and the Queen of England. In addition, she made Time Magazine’s edition of the 100 most influential people. There is even a Malala Day.
Ahed wasn’t as lucky, we don’t see #ImAhed #JeSuisAhed or #MeToo outrages or support groups from the usual suspects. Feminist groups are silent, the champions of women’s education rights look the other way. Not even a whisper of a protest from Malala herself. Not to belittle the tragic attack on young Malala, no one wants to go through an experience like that which almost cost her life.
While Malala was targeted for advocating Western education in a country torn and destroyed by western occupying forces, Ahed was targeted by an apartheid Zionist system. Why Ahed‘s story didn’t get the same attention in the west, or got praise and glorifying coverage in the western media, is simply because Malala’s story fits the post-9/11 Western narrative about Islam and Muslims, oppressed Muslim women by Muslims extremists and Jihadists. Ahed’s story did not; the young blonde Palestinian activist is not the typical oppressed Muslim woman. Ahed’s image violated the Western narrative of Islam and Muslims.
Ahed was on the other hand oppressed not by our enemy, but by our friend, an apartheid system that all Americans are familiar with. Ahed’s story violated the Western self-righteous script. However, Malala’s story upholds this narrative; a young oppressed Muslim woman shot by a Muslim jihadist for defending women’s rights in a backward Muslim world. Ironically and perversely, Israel has for years been destroying schools and killing young Palestinian students seeking education, yet no world condemnation or Nobel Prizes have been offered to victims.
Malala’s story made it to the spotlight of our collective conscious; it is the story of a victim of our enemy that needed to be told many times over to reaffirm the Western self-righteous script, but the story of Ahed is a story of a victim of our own making; it needs to be rewritten to fit the American script, so we adopt the Israeli narrative, the 16-year-old Palestinian girl’s peaceful protest constituting a threat to Israeli national security. No one who threatened Israeli national security has ever won a Nobel Peace Prize, just ask ex Egyptian President Sadat, he understood that very well, he even gave his life for it.