Since Athens 1896, there have been many changes to the sports on the summer Olympic program. at Rio 2016 golf and rugby-7s join the program to reach 28. Aquatics, canoe/kayak, cycling, gymnastics, equestrian, volleyball and wrestling have multiple disciplines, but the new sport that was recently added and everyone was talking about is judging athletes in hijab.

The contrasting images last week of the fully clothed Egyptian women’s beach volleyball team playing the skimpily clad German team swept across media coverage and the internet during the 2016 Rio Olympics. Sports uniforms, which are big business mainly dominated by corporate sponsorship, were suddenly transformed into a cultural hot button on the beach of Rio de Janeiro, Brazil.

Watching women with oily bodies in bikinis playing beach volleyball has become a global spectacle, attracting millions of viewers. Sexism has always been a part of women sports. But only recently, in 2012 to be exact, the FIVB (International Volleyball Federation) announced that it would no longer enforce its bikini requirement on women’s beach volleyball players.

That decision was driven not by cultural or feminist pressure, but by the global appeal of volleyball in non-Western countries and by fear of losing the market and players in places where people have different ideas about how women should dress. FIVB spokesman Richard Baker said, “We don’t think we will see much change [in attire] on the world tour.”

However, the Egyptian team not only delivered change at the Rio Olympics, but changed the conversation about women’s dress and feminism. Muslim women, body and soul, were once again in the international forefront. The West has been fixated on Muslim women’s dress for a long time. France has banned hijab wearing in public schools and government facilities, and the “burqini” — the long swimwear that some Muslim women wear — has been banned at some beaches.

As Arundhati Roy articulated it, “coercing a woman out of the burqa instead of enabling her to choose is an act of violence, humiliation and cultural imperialism.”

The idea that Muslim women’s dress is a tool of oppression and is forced on Muslims is a very old medieval argument. In a video from the United Kingdom’s Telegraph, you can see Syrian women burning their burqas after their town was liberated from ISIL. In the same video, one woman held the burning burqa and chanted joyfully in Arabic: “May god burn their [ISIL’s] hearts as they had burned ours.”

When the bikini was forced on women players by the International Volleyball Federation, we didn’t see a feminist revolt or a bikini-burning protest against the oppressors. Muslim women may burn the burqa when it is a symbol of oppression, or they may wear it as a symbol of resistance to Western colonialism and domination — or to show their displeasure with a despotic military regime.

The U.K.’s Independent noted that a bodysuit (hijab or otherwise) is not worn for religious purposes only. Many players wear them in practice because they are more comfortable. Or they may wear the bodysuit during competition before the cameras and a short or skimpy cloth during practice. Muslim women volleyball players may do the opposite, wearing the body-suit during competition and for the cameras, a short or skimpy outfit worn during practice; it is called privacy.

In the game between Egypt and Germany, millions of viewers were shocked to see women players not being treated as sex objects. Media coverage has incited a deep cultural divide, with headlines like “Bikini vs. Burka” by the BBC. The New York Times thought it was a “clash of culture.” The British tabloid the Sun went further; for them it was “Colossal,” and for the Daily Mail it was a clash between “the cover-ups” and “the cover-nots.”

Bill Weir of CNN wondered on Twitter: “Do you see a culture clash? Or the unifying power of sport?” Nobody noticed that on Scotland’s Olympic team, all of the men were wearing skirts. BBC Sport went with a sharper headline, “Hijab & Sword,” featuring fencer Ibtihaj Muhammad and the “defining moment” in her life — “becoming Team USA’s first hijab-wearing Olympian.”

The nearly naked bodies of women volleyball players were less provocative than the Egyptian women’s fully covered bodies. Time magazine explained that the two Egyptian players “ … competed in long sleeves and long pants in observance of Egypt’s Islamic culture of modesty. …” However, wearing hijab in Egypt is mostly a personal choice and not mandatory.

Having an Egyptian-American anchor, Hoda Kotb, in NBC Sports’ ethnocentric coverage of the Olympics’ Opening Ceremony — her excessive laughs, her bleached hair (a soft hijab) and her dress that made her look like she had been mauled by a wild dog — didn’t help, either. NBC’s coverage was nothing more than a laundry list of stereotypes and all of the bad things happening in various countries: Egypt was reduced to hijab-wearing players, a troubled place plagued by violence; Saudi Arabia to its treatment of women; Brazil is ravaged by riots and corruption; Russia is overtaken by doping. We learned that the Nigerian team was not getting paid and missed its flight.

This critical coverage didn’t extend to countries like the U.S., Israel or even France. A listing of their respective social illnessness would be refreshing: “The team from the USA, a country struggling with systemic racism, police brutality and a fascist who may become the next president”; “the team from Israel, the Jewish state committing atrocities against Palestinians.” “And here comes Team France, a country that is waging a crusade against Muslim women’s dress and is plagued by constant labor disputes.”

As Tonga’s flag bearer entered the Olympic arena with his oily bare body, the NBC studio, as well as the internet, went oiled-man crazy. The U.K.’s Metro News tried to calm everyone down and gave us an interesting insight on why 450,000 condoms were distributed to Olympic athletes.

I’m sure most of these condoms went to male athletes — and that not one was handed out to the Egyptian women’s volleyball team. 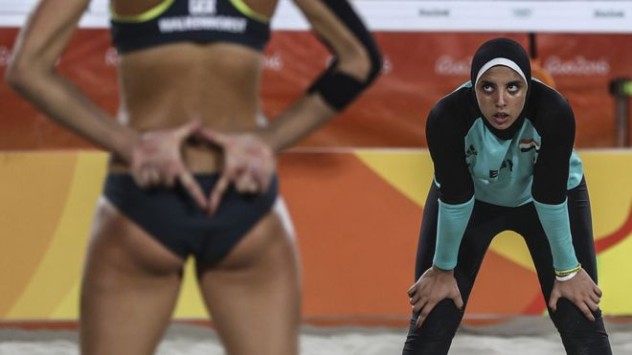 Read it in Other Publications

My Iftar Under the Allianz Stadium Tent! !!