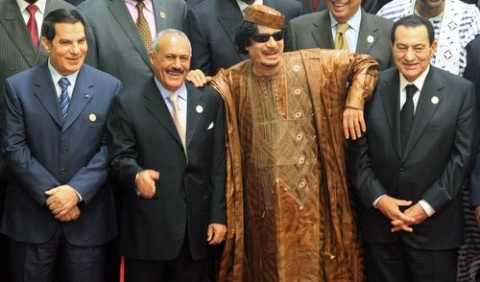 Notes From America:
Time for Arab dictators to find a second career!!
The Arab Spring in the last four years or so forced a few Arab dictators prematurely from their jobs, where they have a heck of a time handling their imposed retirements. In a democratic world, leaders usually get a job review after a few years then once they leave office they have to explore their options and develop different skills. Some, like President Carter, go into humanitarian work to do all the things they couldn’t do while in office. Others, like Clinton, go on a talking circuit to recoup all the money they spent on litigation while in office, or Blair, who has gone on tour like a political mercenary. Others go back to the private sector as lobbyists or consultants to make hard-earned government experience available for a price. Most go on to write obligatory presidential memoirs full of biographical information that no one reads.
However, Arab leaders don’t have this luxury; their job is for life and don’t really learn a marketable skill other than oppressing and controlling their respective populations and it is not the sort of thing that an ex-dictator usually puts on a resume. They never get a chance to explore their other personal potential. This limits their chance in the job market once they leave office, which usually ends due to an act of God, or a human act, like assassination, or a coup. There are a few jobs opening for an ex-dictator. Which makes it hard to pursuit a second career. So what if Arab dictators had to find a second career? Well, let’s pandered on that, shall we?

We will start with Zine al-Abidine Ben Ali of Tunisia, the one whose demise inspired the Arab spring, who caused an over-supply of ex-dictators looking for a second career. Ben Ali, born in 1936, He stayed in his job for 23 years without any job review, he was running most oppressive police state in the area. Ben Ali, saw the writing on the wall of Arab Spring, escaped with billions of dollars to Saudi Arabia as a permanent houseguest of the royal family. With some attitude adjustments, he would be most qualified to start a money laundering operation as second career.

Move on to Muḥammad Ḥosni Said Mubarak of Egypt, who was born in 1928, and, not coincidentally, was also a military officer and then politician. He was president of Egypt from October 1981 until February 2011. After 30 years in the job, he got a lousy job review from millions of Egyptians who went to the streets and squares to convince him to leave his office and try a second career, and was ultimately forced into early retirement. Although his health was a national security top secretes issue while in office, his illness has now become a public spectacle and a pretext to avoid imprisonment. Now he is playing the life of the “Egyptian patient” as a new career in acting.

Mohammed Morsi, Egypt’s first democratically elected president, was sworn in June of 2012, and just a year later, he was fired through a military coup cooked up by General Al Sisi. Staying in his job for only one year, he never really got chance to develop any skills. His inexperience, naiveté and incompetence cost him the presidency. Now is being used as poster boy for military propaganda and Brotherhood bashing. This American-trained engineer would find a great happiness in another career as a community organizer.

Close on Morsi’s ousted heels came Abdel Fattah Saeed Hussein Khalil el-Sisi, who was born in 1954 and took office in June 2014 at the age of 60. He graduated from the Egyptian Military Academy and numerous Command Staff colleges as well as the U.S. War College in 2006. With his intelligence gathering and spying experience, he courted a Photoshop popular uprising against President Morsi, got a mandate to get rid of the Brotherhood and keeps Egypt from becoming Syria. Since the time of the Pharaohs, never had a dictator controlled all powers in a country like Egypt. Al Sisi does what he pleases, and acting like a super rich frat boy who is playing with his own poop. Always coming up with grand schemes that never completed; 2 millions apartment units for youth, a new capital city, and my favorite, the one with the biggest media hysteria propaganda hype, “the gift to the world from the “mother of the world” shouted official newspaper headlines, the digging of the $ 8 billon new Suez Canal, a canal to nowhere. If he can sell a city that never built and a canal that never finished, Which it would definitely qualify him for a new career as a used car salesman.

Then there is Ali Abd Allah Saleh, of Yemen, who was born in 1942, and, yes, you guessed it, was Yemeni military officer. He led a coup against the government of North Yemen in 1962 and became president in 1978, and then in 1990m he became president of a reunified Yemen. He is a resilient guy, and although he was almost killed by a bomb during Arab Spring uprising, he survived with just burns. He followed Ben Ali and escaped to Saudi Arabia for a tune-up job, shifted alliances and came back and re-aligned himself with the Al Houthi minority in his second career he would be a pirate of the Arabia.

Not to mention Bashar al Assad- of Syria, who at 50 has been the Syrian president since 2000 succeeding his father, Ḥafiz al-Assad, who had ruled Syria from 1971. In spite of early hopes, his troubles have mounted, but he has kept his job while losing everything else. The former eye doctor should be thinking about another career as a plumber who would destroy your house to fix a faucet.

Let’s not forget Muammar al- Qaddafi, the quirky Libyan leader who was born in 1942 and ruled from1969–2011. He was elusive, and known for his nonsensical and hyperbolic speeches—zinga, zinga! He tried to weather the Arab Spring storm, went to the streets to lecture the Libyan people about real revolution, and tried to get help from Africans soldiers on the ground. Alas, his tragic end came from above through Western bombs to end his chance to develop a second career as a spokesperson for “Just for Men.” Hair products.

Abdelaziz Bouteflika of Algeria, born March 2, 1937, Oujda Morocco, Moroccan-born Algerian politician who became president of Algeria in 1999. Already limited by fragile health, Bouteflika suffered a serious stroke in April 2013 and was rarely seen in public afterward. Even so, in the election of April 2014 he sought a fourth term as president, although all his campaigning was done by allies and associates. As expected, Bouteflika won. He received more than 81 percent of the vote, at age 78, he was brought on a wheelchair to accept his presidency. Not so optimistic about finding a second career at this age, but Bouteflika with all his diverse background and fighting spirit he would do well suited as the godfather for all Arab dictators.

Omar Hassan Ahmad al-Bashir of Sudan, was born January 7, 1944, Hosh Wad Banaqa, Sudan, Sudanese military officer who led a revolt that overthrew the elected government of Sudan in 1989. He served as president of Sudan from 1993. On July 14, 2008, the chief prosecutor of the International Criminal Court (ICC) called for an arrest warrant to be issued against Bashir. He was cited for crimes committed against humanity, war crimes, and genocide in Darfur. With this unique colorful experience for a second career he would be most qualified as a Safari Tour Guide for rich Americans looking for Trophy hunting experience.

Arab kings are the hardest ones to look for a second career; being a King, doesnt require any skill. King Abdullah II of Jordan, born 1962. He succeeded his father, the late King Hussein, as king of the Hashemite Kingdom of Jordan on February 7, 1999. Little known outside Jordan before becoming king, Abdullah has surprised many observers by displaying a natural flair for a job many said he could never handle. His military background served him well, a pilot by training, an urban legend fighting ISIS after the burning of a Jordan pilot. Being a head of a small fragile country, he has a knack for maneuvering and good diplomacy. He would have any problem finding a second career as an Airline Steward.

Last and hopefully least, King Salman of Saudi Arabia, who was born in 1935, served for 48 years as first the deputy governor and then the Governor of Riyadh. He was appointed defense minister in 2011 and crowned the new king of Saudi Arabia on 23 January 2015 following the death of his half brother, King Abdullah. With all the challenges surrounding Saudi Arabia, they have never had a direct war experience. King Salman has changed all that, waging an unnecessary air war with his Yemeni neighbors to the south declaring to the world that there is a new sheriff in town.