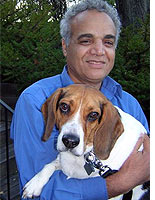 As a youngster where I grew up in a small village in the Egyptian delta, dogs lived outside or in the fields. My relationship with dogs was aloof, fraught with mutual disrespect. As a kid, when I saw I dog, I reached for a rock or a stick. Now living in America, I reach for my camera. My attitude toward animals and dogs has shifted and transformed drastically. America is considered a dog nation and has transformed from “one nation under God” to “one nation under dog.” It is estimated that 60-80 million dogs are owned in United States. Roughly half of all households in the United Stated have dogs.
Americans spend roughly 60 billion dollars on pets every year including: toys, gifts, grooming, food, traveling and health – 16 billion on dogs alone. (Source APPA)

Dogs are nearly treated as children with their own rooms, beds, toys, clothes, birthday celebrations and even their own cell phones. It wasn’t always that way in the United States. Early Americans owned and used dogs like guns – for protection. However, once kids grew up and moved out of the house, many families moved dogs inside to replace the emotional void.
When I first moved to America, I found it very hard to avoid dogs. It seemed that they were everywhere and with everyone. Having a dog in an Arab/Muslim household is an exhausting proposition. Who wants to wash or take a shower every time a dog touches or licks you, as I was brought up to do back home in Egypt? In Islamic tradition, Muslims are prohibited from touching dogs, especially the saliva of dogs. If you do come in contact with a dog, you’re supposed to wash your hands seven times before you pray. Most Muslims will avoid dogs at all cost to stay clean for their daily prayers. In my experience, American dogs can identify a Muslim in a crowd. I’m not talking about those dogs you see at airport that are trained to sniff Muslim travelers. I’m talking about domesticated dogs at homes where they don’t take a Muslims rejection kindly; the disgusting look or the reflexive hands put away, seem to trigger a series of unpleasant behavior. Dogs will do what it takes to make you aware of your transgression. They quickly come and jump up to forcefully lick you. For untrained Muslims, this is abhorrent aggressive animal behavior that warrants at least a kick or a walk away rejection.
I have kept my house dog free as much as I could but after a long nagging from my daughter and a few Internet pictures of an angelic puppy, I reluctantly agreed to let a dog into our home but under a few conditions. The dog was to stay downstairs in what is now known in our houses as the bunker and my praying area would be designated as a “no-fly” zone for the dog.
The 6-week-old, 3-pound beagle arrived on a cold January afternoon. We named him Oliver. I worked from home so I spent a lot of time with the dog; feeding him, playing with him, taking him for walks, and making sure he got his naps on time. But the most humbling experience you can have with a dog is picking up after doing his business. Cleaning up a dog’s business in public, takes a lot of aggression out of a human. That is what probably kept American men from invading Canada many times over.
Every morning I started walking Oliver in my neighborhood. I noticed something strange was happening out there – something Arab-Muslim Americans have rarely experienced post September 11th/ISIS era. People on the street, in their cars, in the parking lot, and at the supermarket were giving me a new look – a friendly one. Strangers who used to skillfully avoid eye contact now wanted to engage me in warm conversation. Patriotic national hotline tippers, who are usually more concerned about Muslim sleeper cells, now stopped me and cordially inquired about my puppy’s sleeping habits, breed, and big black eyes. Families congregated around me with their children to see the cute puppy, and they talked to him as if he should know what they were talking about.
As a hyphenated American, I discovered that owning a dog easily accomplished what many outreach or diversity-training programs had failed to do for years. Regardless of our race, color, religion, or country of origin, we were one community of civilized dog lovers.
I started taking Oliver everywhere I go. He was my post 9/11 homeland-security blanket. Arabs/Muslims in America: here is an advice, stop whining and get a puppy, now that you need a real friend. (tribute to my dog who just passed away)

here is a link to video story