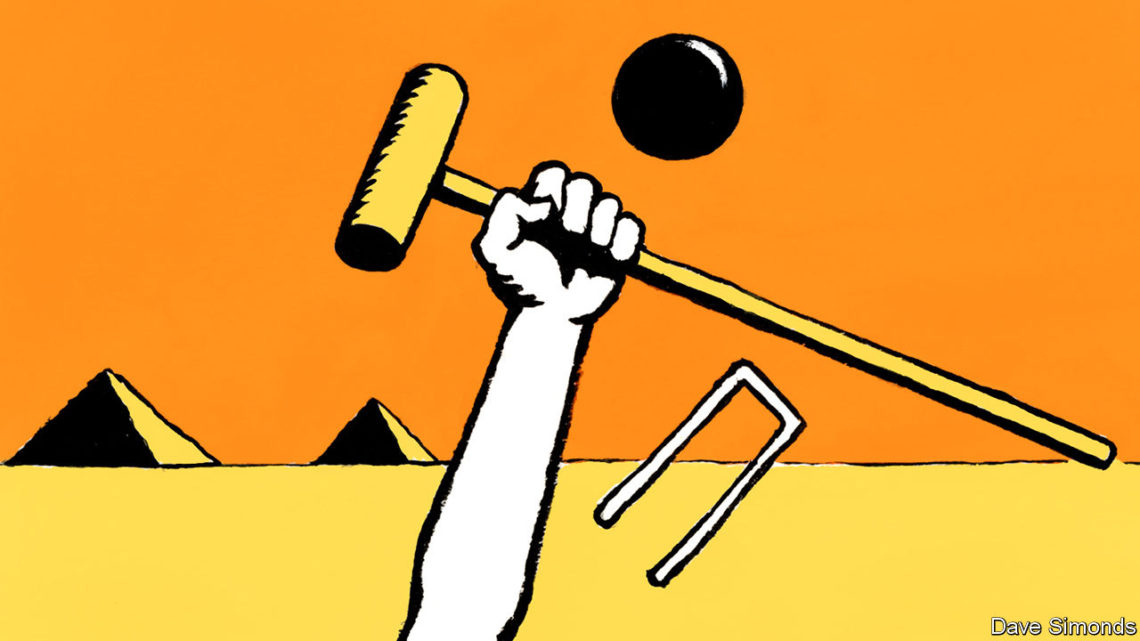 The Game of Croquet (pronounced “crow-KAY”) started in France by a Bachler farmer who had too much time and woods to spare, the game moved to Ireland, then traveled to England from there ended up in the US where it is now a tradition of backyard recreational, social activity. Croquet is a sport that can be enjoyed by anybody; old and young men and women, rich or wealthy. To play Croquet, you need to know the rules and have them handy for reference during a game. The United States Croquet Association (USCA), set rules as a guide for informal backyard play. As we all know, the primary objective of sports in America is to apply rules and sell hot dogs. Now, by introducing VAR Video Assistance View to FIFA football, forensic measurement and photo finish rules turning Soccer to American football. In Egypt where the rules are made to be ignored, it is the social aspects, the conversation the arguments, during the game and long after.

Croquet is played all over the world with different rules and variations. In Egypt, it is still an elitist game where they don’t have backyards confined in private clubs, hotels, resorts, and movies. With about 50 lawns, 5,000 members of the Egyptian Croquet Association in 30 clubs, and 70 years to develop their own style of croquet, I was introduced to the Game of Croquet lately by an Egyptian friend, an ex-military man, who fell in love with the game back in Egypt, a brilliant player and coach. Every summer before the pandemic, we spend hours playing at the Croquet lawn in Centennial Lakes Park, Edina. Unlike any Egyptian I met.  He is a military man who is obsessed with rules and orders.

I never played the game of Croquet in Egypt, I have no idea how the rules are applied, but I assured you loosely. Egypt does well in international competition,  still predominately a soccer culture country, a culture of proximity, where time and place claps and marking and measuring is a lost old art. Egypt is not made up for a game of Croquet. “Croquet? Way too English and stuffy: the sporting equivalent of a barrister wig.” Says Steve Marsh, a senior writer at Mpls. St.Paul Magazine. Here is the version of the Egyptian rules that may help liberate Croquet from private clubs and resorts ghettos, make it available for all Egyptians, the Crooked Game!

The court can be a space with any shape, diamond, square or crooked, a rough surface, soccer field or old farm, size determined by availability, lines marked by natural boundaries, like cornfields, river, or walls.

There are usually nine wickets used in the Croquet; however, any number can be used based on availability and the number of players, the wickets could be made out of available materials like pieces of plastic, wire, bend or crocked. This makes the game unpredictable and more fun.

Made out of wood or empty cans, wrapped socks balls, one ball one color for each team or players, take turns, which for players who are used to one ball for all in soccer a bit challenging.

People can spend up to $500 to get custom made ones. However, mallets can be made out of wood, sticks, branches; broom handles readily available any Egyptian household or even players can use their feet instead of mallets for the love of the game. Each player uses a mallet, or share, player, can use any side or any end as long as they all agree on, the more creative, the better. If none is available,

The object of the game:

The object of the game is to advance the ball through each wicket or close to it, until you get to the stick/stake from any direction. The winner is the player who is still standing and didn’t quit during the game, gets to the stick/stake at the end of the court with the fewer hits, and before anyone. Older players can take their time, and younger players are allowed to wait, curtesy, and respect!

Starting point All balls are played into the game from a random spot on the course, marked a tree or river, cornfield.

Older players start first, and the game only interrupted during cars or cows crossed the field, or during praying time breaks.

“Style matters on the croquet court: You look best stroking your mallet like a golfer and coordinating your outfit to the color of your ball. “Dr. Rick Sheely, the president of the City of Lakes Croquet Club” That reference may not do it for Egyptians, so players can develop their own style, hitting the ball from the side as hitting the soccer ball from the side of the ball. As many shots as you need to get to the stick/stake, the out-of-turn play if caught during paly not penalised, however, is replaced to its position prior to the error and play recommences properly. If an out of turn is initially condoned (not discovered) but then later discovered, irreversible, and only can be talked about it after the game on the way home.

If the striker takes a swing at his/her ball and misses entirely, they can try again, practice makes perfect, and the misses won’t count as a shot, only if you hit the ball and the ball moves a complete revolution, which is a rarity in Egypt. If the striker’s mallet accidentally hits another ball other than the striker ball, the shot must be replayed, but with no loss of turn, the players use only one ball anyway.

Scoring: Wicket and Stake Points Each ball can score wicket by going through a wicket 3 points, or hitting it 2 points, or getting close enough, gets 1 point. The ball can go through the wicket from any direction. If the ball passes through a wicket but rolls back, it scored the wicket, same if a ball travels backward through its wicket to get the position, called good luck or turf conditions. Because wickets can be loose in the ground, considered moving targets, it’s always better to use your judgment sighting by eye and not by these rules, the object of any sports in Egypt is the argument during and after the game.