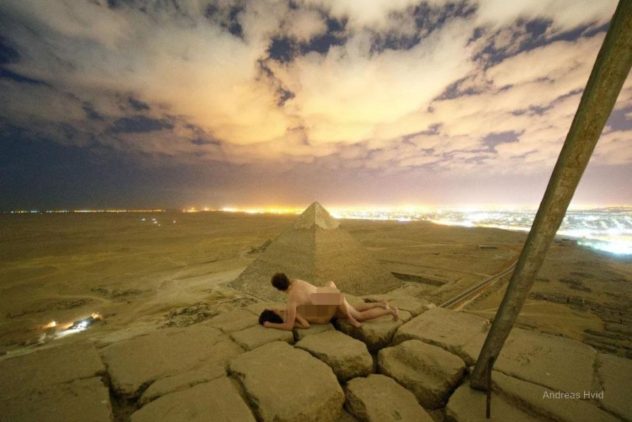 Andreas Hvid posted a picture that caused a worldwide outcry

The west fascination of ancient Egyptian history is as old as the civilization itself.  It took the French underwater archaeologist Franck Goddio more than 40 years to discover two missing ancient Egyptian cities on the bank of Alexandria Egypt, now on exhibition in Minneapolis Institute of Arts, MIA. Last month however, a young man from Denmark named Andreas Hvid travelled more than 2,000 miles to Egypt, climbed the Great Pyramid of Giza, to just have sex on top of it with his girlfriend. breaking the Guinness’s records for having the most boring sex life in the world… !

The Guardian reported that the Danish man, visiting the Pyramids, waited until there weren’t people or security around, (which is hard to believe), snuck away with his companion and started climbing the Great Egyptian Pyramid. This is illegal and not encouraged in Egypt, unless you bribe someone or are a VIP visitor to the Egyptian authorities of course. On my last visit to Egypt I took a few Americans friends to visit the Pyramids, we arrived two hours before closing time but security turned us away, stating they were preparing for a VIP visit, not knowing for sure which VIP they were talking about.

Andreas Hvid posted a video apparently of himself and a model climbing the pyramid at night.

Mr. Hvid, a Danish photographer according to the Guardian, is known for his exocentric photographical stunt posted on his website where it appears that the naked couple were engaging in one of the ancient acts in the book, sex, on the backdrop of the striking skyline of Cairo. Mr. Hivd denies having sex on top of the Pyramids, telling the Danish Tabloid that “We did not have sex and we never had it.” Mr. Hivd posted a video on his Instagram account, where you can see the couple climbing the great pyramids; “It took me 25 minutes” he bragged, the video ending with the female companion seemingly taking her clothes off once they reach the top of the Pyramid. The Pyramids, the oldest of all seven wonders in the world, are 147 meters high consisting of more than 2 million stones, weighing over 4,000 tones. They were built c. 2550 BC and took 20 years to build. Despite this history, the first thing that came to this Danish man’s mind was to have sex with his girlfriend there. When I travel abroad and visit Europe, I don’t even listen to Arabic music, speak Arabic on the phone, or pray at the airport. Why white western men when travelling to Egypt or Africa act like James Bond, concurring with ‘these backward countries’ by having sex with the most beautiful women in town, I don’t know; at least this Danish dude brought his own sex partner. Learning about a country’s history and culture is not an option on their itineraries. What is so ironic about all of this is not that it trended virally on social media, nor the way the western media covered it, focusing mostly on committing this act of indecency in such a predominately conservative Muslim country, but the disrespect this Danish man gave to one of the ‘seven wonders of the world’ and the desecration of an ancient burial. The Guardian broke the news with a qualification of degree of restriction with Egypt “Prosecutors in the strictly conservative Muslim country will investigate whether the video is real after officials suggested it might be fake, according to Egyptian media reports.” It is interesting that the Danish couple originate from a country where they are banning Muslims from wearing Burka and Niqab as they wish. Egyptians’ reaction was mute, no calling for a beheading or castration of the Danish man for committing the indecent act and video, some even taking a cynical attitude towards the whole thing accusing the government of manufacturing it to divert people’s attention from the ongoing political pornography performed by President el-Sisi and his regime, now preparing the media and parliament for another political stunt to change the constitution and do away with term limits. However, the outrage was mostly from Egyptian Authorities, Aharam online reported that Egypt’s Minister of Antiquities Khaled El-Anany informed that the general prosecution is currently investigating the ‘Pyramid sex video’ as it was coined on social media; “I stress that scaling the pyramids is strictly forbidden,” El-Anani stated. The Egyptian general prosecutor who is busy sending people to prison for anti el-Sisi postings on social media is now busy persecuting the Danish photographer for desecrating Egyptian heritage. Political pornography performed by el-Sisi and his regime is okay though. The Pyramids have been there for more than 4,000 years, have gone through wars, bombing by the French Napoleon Bonaparte, climbers, weddings, picnics, sound and light shows, however the last time I saw someone on top of the pyramids was an Egyptian praying, so this Danish man, who went through all this trouble to have sex on top of the Great Pyramids, won’t change the Great Pyramids’ majestic standing in the heart of millions around the world. So here is my advice to you Mr. Hivd, next time you visit Egypt, just Get A Room.