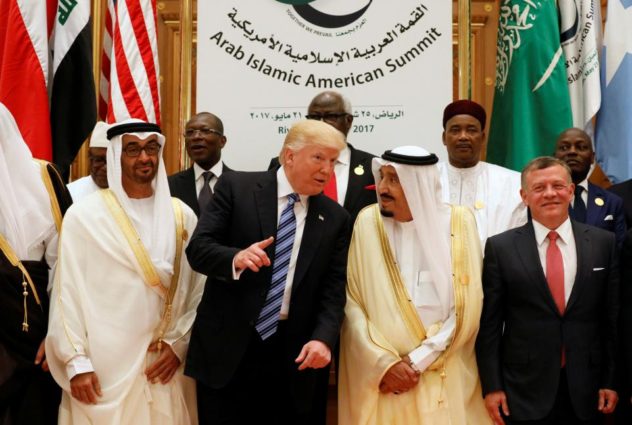 Lots of debate and media coverage preceded and followed President Trump’s visit to the Saudi kingdom. Anxieties and expectations filled the air. Trump, who has been behaving like a royal frat boy all his life,  was visiting Saudi royalty as his first official overseas visit. Trump, the ISIS of American politics, the one who beheaded more than a dozen career politicians in public…  debate, went to Saudi Arabia to talk about ISIS and make Islam great again.

In this, Trump was simply keeping with the American presidential tradition of escaping to the Middle East, literally or figuratively, when there’s trouble at home.

Trump is escaping the Russian connection investigation. Richard Nixon escaped to Egypt during Watergate. Jimmy Carter escaped his whole dreadful term by striking yet again a peace deal in the middle east.. And of course Bill Clinton escaped to negotiate still another peace between Israel/Palestine and to bomb a Sudanese drug factory during the Monica scandal.

In his speech about Islam, Trump lectured the Saudis about Islam. Working with the most oppressive medieval kingdom to make Islam great again. Of course, neither he nor anyone else will attempt to lecture the Jewish state about Judaism. Both the Saudi kingdom and Israel use religion to support their fake state.

Most talk in the media during this trip has been about nonissues — what Melania was going to wear (orange leaving the U.S., black arriving to greet the Saudis, white in Israel). The questions were raised: Is she going to cover her head, would Trump bow to the king, can he dance holding a sword, and so on.

But the issue that got most of the attention in Western and Arab media was Trump’s thumbs-up hand gesture.

Politico’s Annie Karni noted that President Trump “may need to rein in his favorite gesture — the thumbs-up — during his trip to Saudi Arabia.” Briefing materials from the U.S. embassy, after all, noted that the “gesture is considered rude,” reported the Washington Post.

The embassy note listed various cultural taboos that Trump should watch during the visit — don’t point, don’t show the sole of the shoe, etc. Here again, we have Americans treating Arabs like children who need help and discipline.

Never mind Trump’s dancing or hand gestures. What is “rude” about the U.S. to most Arabs and Muslims is the bombing, invasions and destruction of their countries. Supporting Arab dictators and oppressive regimes. Banning Muslims from traveling to America. Demonizing them in media and movies. Addressing them as if they are one monolithic population.

America mistreats Muslims, spies on them, arrests them at home and bombs and bans them abroad. while America has an affinity for Arab dictators.

Trump is just the real America — America without a mask. Landing billions of dollars in arms deals from the Saudis and the United Arab Emirates, that’s all that matters. The oppression of women and denial of people’s freedom and dignity never drove U.S. foreign policy in this part of the world — it only comes up when it’s needed as a pretext to invade and destroy. What drives American foreign policy in the middle east, Since Roosevelt, is securing Oil and Israel. !

The Saudis donated $100 million to Ivanka’s foundation to help empower women while killing Arab women and children in Yemen. Trump admires a mass murder like Abdel-Fattah el-Sisi of Egypt, who committed the biggest massacre in Egyptian history and toppled its first civilian elected president. Trump, the one who bragged about grabbing women’s private parts, invited el-Sisi to the White House — el-Sisi, the one who oversaw forced virginity tests during the revolution.

“….Let us imagine that, instead of opposing the Arab Spring and the popular uprisings of 2011, Saudi Arabia decided to invest and develop the Arab world. Let us imagine that the House of Saud put $340 [billion] into backing the results of free elections in Egypt, and Libya and Yemen, instead of backing military coups and counter-revolutions.”

Where would the House of Saud and the Arab world be now? he asked.

I think we can imagine another scenario. What if America had done the same thing — supported Arabs’ national movements, their aspirations to live free in dignity, instead of supporting Arab oppressors, dictators and arms dealers? Imagine that Americans stood on the side of the Arab people who desire the same rights and opportunities any American is guaranteed.

Where would the House of Americana be now?

Donald Trump‘s speech on Islam is being drafted by Stephen Miller, who previously drafted the administration’s failed travel ban on seven Muslim-majority countries.!!

Top 10 Things Trump may be saying in Saudi Arabia

During Trump visit to Saudi Arabia! ..American Embassy issued an Advisory Taboo Note … here is my Taboo note to Arabs visiting American..
Taboo
1. Don’t double dip in parties
2. Don’t order steak, “well done”
3. Don’t talk politics in sporting events or Shopping malls
4. Don’t show your middle finger, only on freeways.
5. Don’t ask a woman about her weight age!
6. Don’t show the price tag of your shoe!
7. Don’t discuss democracy with anyone wearing a flag
8. Don’t ask people about their religion, even if they just asked you about yours
9. Don’t drink in public, sex maybe!
10. Killing boyfriend or wife is considered Domestic Violence and not Honor Killing!

Ahmed Tharwat is host and producer of the Arab-American TV show “BelAhdan,” which airs at 10:30 p.m. Mondays on TPT. On Twitter @ahmediatv. He blogs at Notes from America at www.ahmediatv.com 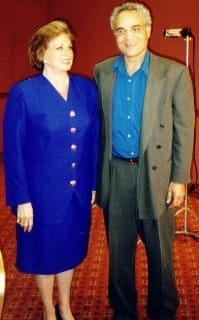