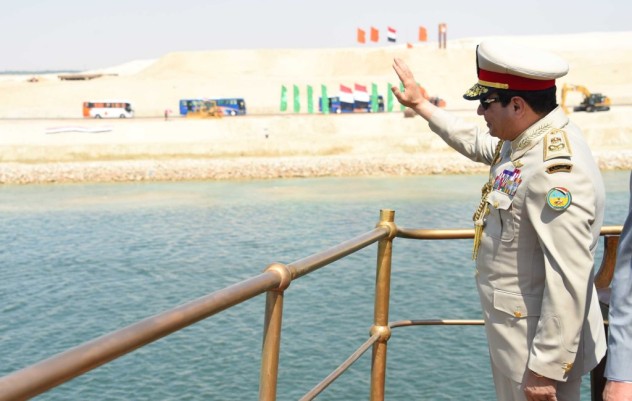 Dear Mr. President, I’m sure you are a very busy man these days, running a big country like Egypt is not an easy task, lots of responsibilities; rigging election is hard work, convincing million of people that digging 20 miles tranche is a new Suez canal is a moral burden, politicizing the justice system is time consuming, keeping Egypt from becoming Syria is a full time job that I’m sure requires arresting oppositions, jailing journalists, shutting down media, suspending parliament, getting ready of the entrenched Muslims brotherhood becoming your biggest battle, working on modernizing the Islamic world is now your greatest jihad to get into the international recognition.

Mr. President now I got your attention, my name is Ahmed Tharwat, although I have been living in the United States for more than 30 years and I still feel a close connection to my native country. I am writing on behalf of my nephew Hassan in Egypt. Hassan as thousands of young Egyptians like him whom were arrested during the crackdown on protestors almost three years ago in August.

My nephew, Hassan, was a sweet 18-year-old boy, he had been working hard to build his new future.The youngest in his family of 3 brothers and 2 sisters, On my last visit to Egypt in 2012, I remember Hassan as a gentle, kind, young boy, a hard worker and lovely kid. Love traveling, camping and sports, a great inventor who was always thinking of new ways to improve things around him.

He was always looking for a better way to improve his conditions. He had never been affiliated with any political or religious organization or groups.  In August, Hassan found himself in the wrong place at the wrong time when he was arrested among the thousands who were lucky enough not to get killed the day of the crackdown on El Nahda sit-in protest. For weeks, his family didn’t know anything about Hassan, the anguish of his mum was overbearing, knocking on every door and begging for any information to lead her to he son where about. They finally found him in Wady El Natroon detention center in Eastern Cairo later moved to the worst prison in Egypt Torah in Al Maady suburban of Cairo. To date, Hassan never had giving any verdict or sentences, Hassan hasn’t had his day in court. Additionally, his family has to go through great hardship every time they are allowed to visit him, from a harsh long drive to the uncertainty of crowded over there head. The prison officials have turned the unfortunate of prisoners as a business, extorting money and bribes from families and loved ones. Hassan’s Twin brother ironically was drafted to the military on the same day Hassan trial was postponed for the 25th times and to add insult to injury they decided to cancel Hassan visitation for 3 months without any explanation or written statement. Hassan is better off reunited with his family and friends he needs to get his life back on track, goes to his school and his studies.  Mr. President, my nephew is not a threat to the national security of Egypt, but, rather, he and his fellow political prisoners are the future of Egypt. Last August, your Ambassador of the US Mr. Mohammed Tawfiq, was visiting my city here in Minnesota attending Friends of Alexandria library celebration. I interviewed the Ambassador for my TV show. I asked him about all political prisoners in Egypt, which according to some human rights organizations estimates is more than 40,000 of them. They have been suffocated in a legal limbo and procedures, they have been denied due process, their lawyers have been denied access to their trials. The Ambassador didn’t deny the political prisoners account but he denied that they haven’t been charged and asked for more information about anyone who was detained without charges. I gave the Ambassador a letter from Hassan’s sister; in the letter she reflected on her constant anguish after taking her brother Hassan away. Dear Mr. President I have seen and heard about how much you love Egypt. I have no idea what kind of Egypt that you love. You can’t love Egypt and put the future of Egypt in prisons, you cant love Egypt and keep students from their schools, you can’t love Egypt and keep the noblest and brightest Egyptians in jail. You cant love Egypt while bringing the worst of Egyptians; tribalism, hatred, xenophobia, anti-intellectualism, and provincialism. You cant love Egypt and turn it to a big prison, where people cant leave, and are afraid to talk, or assemble. Mr President, before you and your Army drawn in the political flood in Egypt, Mr. Pharaoh man, let my people go, Let my nephew go!!

Sincerely yours,
Ahmed Tharwat
Host and Producer of the Arab American TV show BelAhdan
His Articles published in National and International Publications
He blogs at
Notes from America
www.AhmediaTV.com
ahmediatv@gmail.com
Please visit “letMyNephewGo petition and sign my letter to President Al Sisi.
http://petitions.moveon.org/sign/let-my-nephew-go
Read it at StarTribune
http://www.startribune.com/an-open-letter-to-egypt-s-president-let-my-nephew-go/342148871/