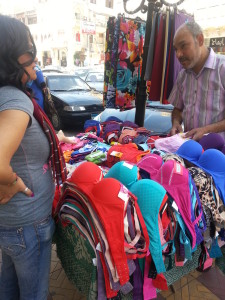 Cairo’s Tahrir Square is the global symbol of the January 25th Revolution, where millions of Egyptians, including women, went to demand the toppling of the regime. Lately, Tahrir Square has witnessed the courting of the Egyptian population by General Al Sisi and his propaganda machine as well as a “Million Woman March” demanding the toppling of the hijab.
The history of progressive women and their struggle for independence and social freedom is an old one. They are starting with the Egyptian feminist and activist, Huda El Sha’arwi, founder of the Egyptian Feminist Union in 1923. Two events stand out in the history of women’s struggle in Egypt. In the Egyptian Revolution of 1919, women showed side by side with men. And used their hijab as a symbol of resistance to the British occupation, and again in the 1940s and early ’50s, when small groups of radical women leftists embraced the topics of inequality and nationalism with a strong anti-imperialist bent. Here is a pamphlet published by the group that announced, “. . . struggle to realize democratic freedom for women in Egypt–that is the freedom which cannot arrive under the shadow of the imperialist and imperialism nor under the shadow of enslavement and exploitation.”
Egyptian women, who are again trying to gain the freedom to remove their hijab, need to “burn their bras” first. Their western counterparts did in the sexual revolution of the 60’s. Back in Tahrir Square, Egyptian women may not be correctly burning their bras anytime soon. Still, you can see them buying bras, lingerie, and undergarments on the street. Nowadays, it is not uncommon to see bras and lingerie displayed on every street corner and in the windows of shops, even on sidewalks in the slums of Cairo.

The street in Egypt always has a striving, vibrant life and culture of its own, which millions of Egyptians use as an extended landscape of their own homes, a refuge from their own harsh realities. On the streets, Egyptians sit, converse, watch TV, eat, drink and sell and buy everything and anything, now even women’s lingerie. Watching women dressed in their traditional clothes and hijab buying lingerie in public is a confusing cultural experience for the untrained eye.
Once I stopped by a street lingerie shop in a suburb east of the city of Cairo. The colorful and fashionable Chinese-made bras and scanty underwear covered the carts. Ironically, this lingerie sidewalk shop, like virtually all of them, was run by a man; women don’t sell underwear in public, but they buy them almost only. Buying lingerie in public is a recent phenomenon, self-expression, and social experience. Naturally, flirting is a big part of the lingerie-buying bargaining game, where sexual euphemisms are not a social taboo. The lingerie carts were everywhere, surrounded by a few women in their long garments and hijab. Sorting and holding up lingerie in their hands, confidently checking sizes and style, oblivious to the piercing public eyes since there is no privacy. No dressing room on the sidewalk lingerie shops. Here, the salesman was very cool, respectable, and helpful conversing with a slightly full-figured woman as he casually handed her a thong, as if he was a Kleenex.
“That is too small,” she shrugged.
“Not at all. It is your size,” he assured her as if he knew something!
She smiled, steered his hands away, and continued her quest for the right-fitting undergarment.
I approached the lingerie cart, and curiously asked the charming salesman about his secret.
“How do you help your customers with sizes and styles?” I queried.
“I look at her waist and shoulder,” he replied in all sincerity as he demonstrated his technique on his own body.
Contemporary lingerie can be whatever the modern woman wants it to be, and women have more choices now than at any time in history. The Western woman may still buy her undergarments in secret from Victoria’s Secret in a private moment inside a store in a mall. Still, at the sidewalk lingerie market in Egypt. The confident Egyptian woman is buying her lingerie under the public eye, which empowers and gives her the freedom to express her sexuality in such a conservative culture. At the sidewalk lingerie market, there was lingerie for all situations and intentions, including lingerie that was strapless and backless. Also offered were the sexy thong, teddy, as well as a plethora of everyday bras and panties.
Egypt, with all its political turmoil and anxiety, now offers the woman an escape into a lingerie shopping journey to reward herself and feel good about her own body. Something which has been ignored for so long. Now in the era of the new Prince Charming Al Sisi, the Alpha man, the conqueror of the Muslim Brotherhood invaders, women may not be able to protest in the street. Still, at least they can freely buy their own lingerie.
Ahmed Tharwat/ Host of Arab American TV show “BelAhdan”
His articles appear in national and international publication
He blogs at “Notes from America” www.ahmediatv.com
You can follow him at twitter www.twitter.com/ahmediatv

Once I stopped by a sidewalk lingerie shop in a suburb east of the city of Cairo. The colorful and fashionable Chinese-made bras and scanty underwear covered the carts. Ironically, this lingerie sidewalk shop, like virtually all of them, was run by a man; women don’t sell underwear in public, but they buy them almost exclusively. Buying lingerie in public is a new phenomenon, self-expression, and social experience.