In 1967, after the devastating Egyptian military defeat in the so-called six-day war, Egyptian pride was broken. The “mother of the world–as Egyptians like to say—had lost its balance and place in the world, and Egyptians had lost faith in the military and their hero, Gamal Abdelnasser. Nasser vanished overnight, actually in six days. People started looking for another narrative other than the secular one that was championed by Nasser and his Arab pan project. Lots of Egyptians turned their faith to mosques and churches instead.  Then in 1968, the Virgin apparition was the story that consumed Egypt for weeks and months.  It was the story that shook the Egyptians’ psychological foundation and belief system. Thousands of Christians and Muslims marched from all over Egypt to get a glimpse of the Virgin. People were talking about her image as it appeared at a church in “Zaytoon” located on the outskirts of Cairo.

An old joke then went like this:  A man told his friend, “Hey, the Virgin appeared in “Zaytoon!” (Olive in Arabic)

“Yeah… I wish next time she would appear in cheese,” … the friend said sarcastically.

Over 40 years later, this man got his wish. Now and after the Military coup in 2013, and toppling president-elect Morsi and his Muslim Brotherhood clans, we have the Sisi apparition, the general who heads the Egyptian military. His image appears not only on cheese packages but on chocolate and all over Egypt.  Sisi-Mania is spreading like a wildfire with his image appearing on everything from buildings, cars, carts, shopping malls, wedding gowns, naked bodies, cafes, cups, burgers, sandwiches, even TV sets!, Sisi souvenirs are now sold everywhere. Egyptians are passionate about their love and hate too. Egyptian women are falling in love with the new Prince Charming of Egypt. Sisi pictures with his ominous sunglasses are showing up on billboards, streets, parks governments offices, newspaper frontline headlines, and replacing revolutionary wall graffiti. . Songs are made just for the general, “Bless your hands” and ”finish your favor…) popularized by famous artists and poets, a dancer using the general posters as an Eve’s leaf covering her scantily clad body as she seductively dances on a stage. A woman columnist wrote in Al Misry Elyoum, a daily newspaper owned by businessman Tycoon Mr. Swaire, “ Just wink … “Sisi “and you will get anything you want.” Another reporter went as far as saying the name Sisi comes from the great Egyptian Pharaoh name  Ramses, “RamSisi” in Arabic. “I wish Sisi would father all our children so we could have more heroes,” declared an enthused man.  At weddings, women are replacing their wedding gowns with Sisi gowns, and on the street, you can see young and old women wearing Sisi T-shirts as a new fashion. Artists and talk show hosts are raving about the new Egyptian sweetheart. General Sisi himself is banking on this. His PR machines are presenting his military as attractive young and fertile.  “Our Military spokesperson should be handsome to appeal to women,” he was caught on video instructing his staff.

This SisiMania is not very well understood in the context of post Arab Spring craze, where people revolted and toppled a 30-year of military dictatorship. People around the world usually admire their generals for their military adventures and winning wars, but in Egypt where it has been out of history for 30 years under the ailing dictator Hosni Mubarak, now they are looking for vitality. They celebrate a general who as a head of military intelligence during SCAF 18 months tenure, and according to BBC and international human rights groups, oversaw the forced virginity test program on young women protestors in Tahrir Square, the very same general now is loved by many Egyptian women for his sex appeal. These are the very same women who filled Tahrir Square with their thundering chanting that terrified Mubarak and his security apparatus.  “Aish (bread), Freedom and Social Justice,” has given way to singing “Bless your hands, Sisi.”

Where have you seen Sisi …..lately! 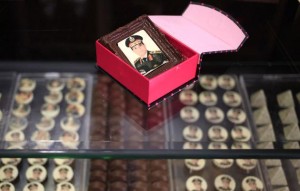 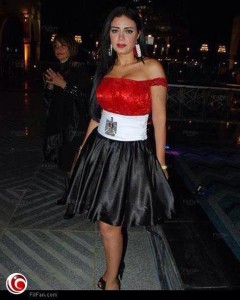 The best man in wedding 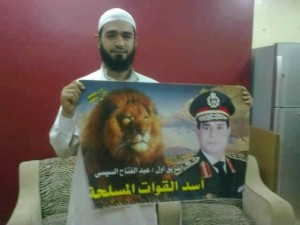 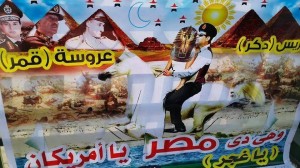 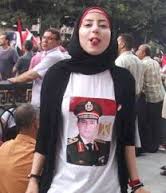 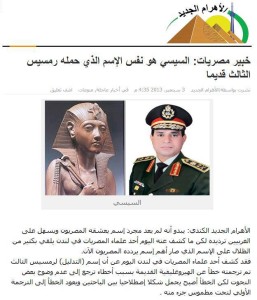 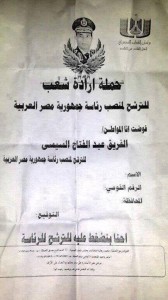 The will of the people Sisi presidential election campaign…

Welcome to the land of Sisistan 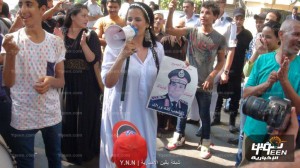 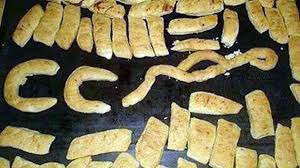 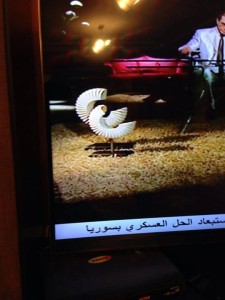 Even on TV set 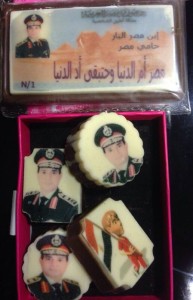 Egypt mother of the world… 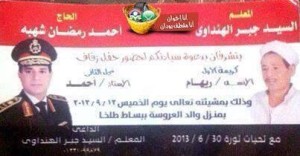 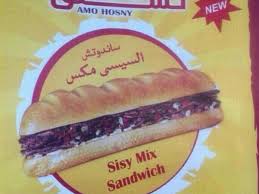 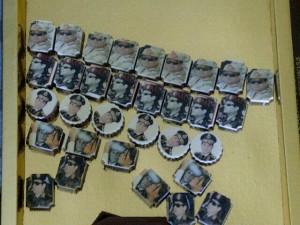 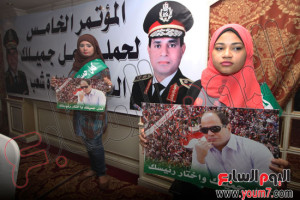 The reluctant hero, they all start that way 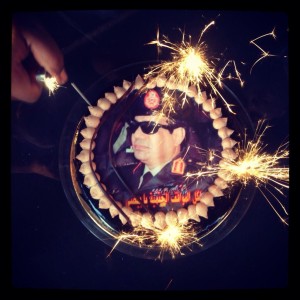 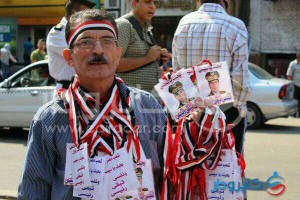 glad that  Sisi picture has a price.. 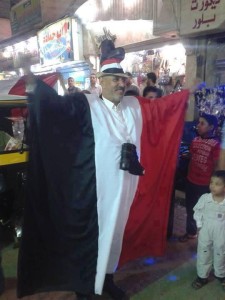 Wearing the Sisi flag and his boots too 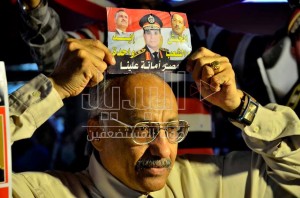 I have seen this cartoon before, with a different hero

A columnist wrote, Just wink, and you will get everything you desire! 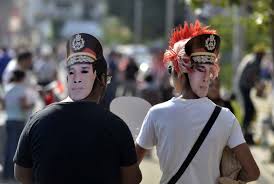 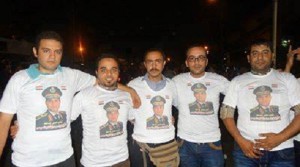 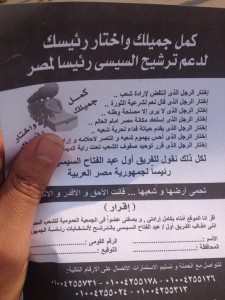 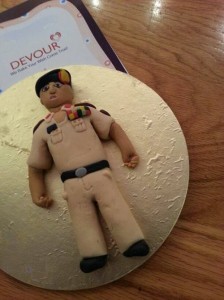 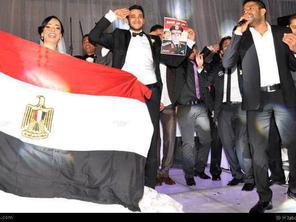 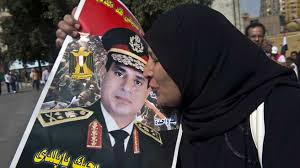 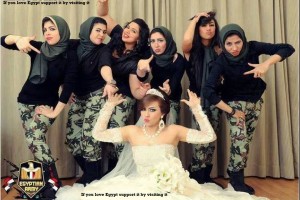 I have no idea what that is… weird