The presidential debate triggered many arguments, lots of speculations disagreements about the winner and loser, but one thing for sure we all agree on, it was a mess. “We all lost. If letting men in their 70s talk over each other is the best way to decide presidential politics, then there’s no good reason to do two more.” reported in the Times. “That was a hot mess, inside a dumpster fire, inside a train wreck,” said CNN’s chief Washington correspondent, Jake Tapper. “That was the worst debate I have ever seen. Even the reaction in China where debates are overrated, actually there is none, there was dismay. Hu Xijin, the editor of China’s state-backed Global Times, tackled it head-on, tweeting that “such a chaos at the top of US politics reflects division, the anxiety of US society and the accelerating loss of advantages of the US political system.”

All I got out of the debate is as the Conversation reported “Biden told Trump to “shut up,” and few issues were discussed in enough depth to provide much information to undecided voters.”

Presidential debates don’t decide elections or bring anything new so why even do them. It is a circus; that is why the republicans usually send clowns to deletes. The question for the democrats and so-called left how to debate a clown. The look on Biden’s face wondering why I am even in here with this fool, ” as they said, “Do not argue with a fool. He will drag you down to his level and beat you with experience.”.

The New York Times columnist Nicholas Kristof explained before the debate advised us “To beat Trump Mock Him.”. His column is worthy of Thomas Friedman’ anecdotal journalism award. As he claimed, Mr. Kristof traveled to many countries, covered dictators worldwide, and concluded that President Trump’s critics should learn something from other countries? “Most Americans don’t have much experience confronting authoritarian rulers, but people around the globe are veterans of such struggles. And the most important lesson arguably is “laughtivism”: he explained.. the power of mockery. Mr. Kristof, instead of asking Americans to revolt and the workers to protest against crony capitalism and the system, he is asking Americans to have fun with Trump. I’m laughing already. Richard Friedman: a psychiatrist, offers advice to Biden in today’s debate, “The first weapon may be the most effective: humor and ridicule.” Seriously, this is not a laughing matter in America. First of all, Trump is a clown; he doesn’t need us to mock him; he is doing it himself every day in front of his cultlike supporters and front of Fox News cameras. You can’t Mock a clown. As Mr. Kristof quoted a chines activist in his piece, “A clown needs less revenge than a monster does”. 2ndely Americans still believe in most part, unlike other countries, they elected their crooks, and they can vote them out now and then. 3rdely, Americans, have not been oppressed enough to sharpen their political mockery skills. They don’t have what it takes to master the art of political mockery.

Mr. Kristof’s anecdotal style sited example from many countries he visited; Yugoslavia, China, Russia, etc. except the nation that mustered the art of political mockery. Egyptians live under dictatorial regimes,  never had  a presidential debate. Well, maybe one right after the Jan25th revolution, in 2012 however, the two presidential candidates are rotten in jail ever since. In Egypt, change is scarce, where military rules are like catholic marriage, you live with it until death do us apart. So, they do not stage the political debates in Egypt between politicians in front of the camera in a controlled envenomate with preset rules,  they are between the people themselves no rules or limitations. Egyptians, if they can’t change their dictators, they mock them, and one of the most effective political mockeries is giving dictators degrading names. Gamal Abd el Nasser was the “Catastrophe” Sadat went from Mr. “Yes” to the Traitor. Mubarak was called “La vache qui rit,” the laughing cow, a famous brand of French cheese in Egypt.

However, no Egyptian dictator has triggered so many names in such a short period as General Abdelfattah el-Sisi. General el-Sisi was elected after a military coup that ousted the elected president Dr. Morsi, committing the biggest massacre in Egyptian history at Rabaa.  Egyptians started their [political debate, name-calling revolution, giving el-Sisi names that are degrading and culturally inferior. Names that reflect the characters of the dictator. A Name like Candy (حلاوه), a name that is reserve for an uncouth person, Date (بلحه,) name usually given to insult and belittle, then the most culturally degrading name that is stock till today, the Pimp, (معرص). This for his willingness to say anything to anyone for getting what he wants, using his socially inferior speaking style, saying something, and doing something else. Egyptians have disowned him, calling him Son of a Jew (يهوديه ابن) for his blatant support for the Israelis against the Palestinians, Particular, taking part in the suffocation of the people of Gaza. el-Sisi, like dictators before him, earned the name Traitor (خاين). Then came the name that hits him in the heart of his religious pretense; the Infidel( كافر), and the enemy of god. Thief (حرامي) for his Ponzi schemes to collect money for his henchmen under the banner “Long Live Egypt” box, which also earned him the name Beggar (شحات) and Con artist (نصاب). SOB (وسخة ابن)is a name degrading more to his mother, Psychopath (سفاح), after committing the biggest massacre of Egyptian history at Rabaa and Nahda sit-in. But finally, here is my favorite one, Awaad; (عواد ) a name of a folkloric figure of a farmer who sold family’s land and ran away with the beautiful gypsy. He earned this name after selling two Egyptian islands to Saudi Arabia. This is not by any means inclusive, and the list goes on, for political mockery Egyptians are very resourceful! 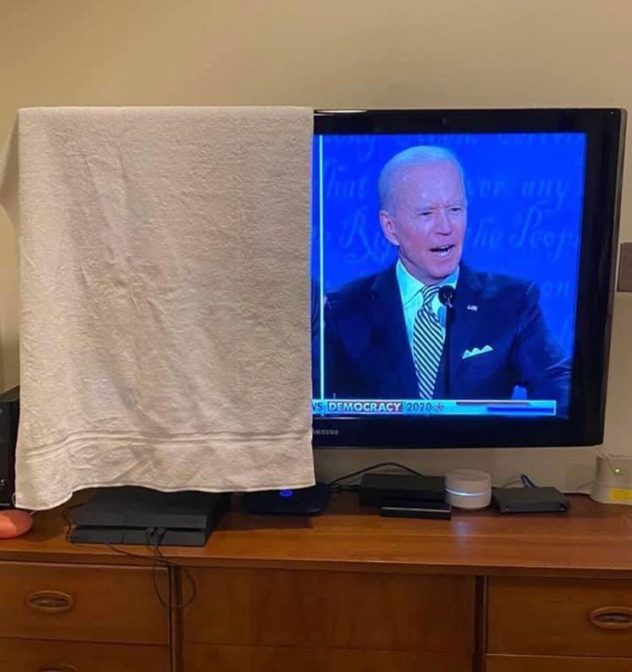 An Egyptian American watched the debate