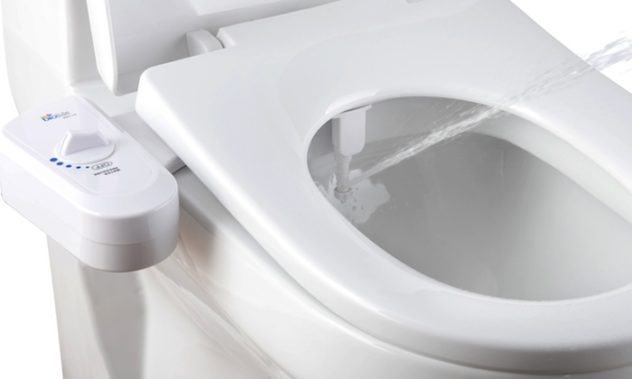 Shattaf-Phobia not Islamophobia in America

We have so many phobias in this country; from a fear of olive pits and watermelon seeds, to a fear of foreigners and immigrants. Now it is the fear of Muslims, and Islamophobia. These phobias come and go based on the political climate and the country we are bombing.

However, the phobia that has been with us for years is the “Bidet-phobia” – Shattaf – in Arabic. When it comes to butt washing, Americans are very squeamish about it, and using a bidet or water-fountain in their bathroom was always problematic. Forty years ago, as a young Egyptian immigrant, who looked like Omar Al-Sharif for my American friends, but now with Islamophobia, and aging, the most polite comments I get are that I look like Mullah Omar (Taliban leader). I know I will survive the Islamophobia that is spreading like wild fire, and I know Americans will do too; there are enough Americans who know better and they aren’t falling into the trap of Trump, white Christian Americans first and white supremacy.

But the biggest phobia that has directly affected my daily life is not Islamophobia, it is the Shattaf-Phobia, the American aversion to water bottom cleaning.  When I leave home, I’m trapped in toilet paper culture, forced to a bidet aversion environments; in Hotels, public bathrooms and friends’ houses. When I travel across America I can arrange a place for my dog to stay, I can take my favorite food, Pitta bread, Fata cheese and Fava beans, my favorite music, but I can’t take my Shattaf (Bidet) with me. I’m forced to a bottom cleaning ritual that I’m not comfortable with, something I still, after 40 years in this country, can’t get used to.

Muslims don’t really feel fully clean unless they use water and are obsessed with washing. You may think Muslims are assholes, but at lease their asses are cleaner. Wash five times a day to pray, shower after sex, wash after eating, and definitely wash after popping or pissing. We were always told that cleanliness is part of our faith. One of the biggest challenge for Americans when they convert to Islam is learning how to clean their asses with water and use the Shattaf. Americans have a great respect for things or work made by hand, and use their hands almost in all favorite sports, but when it comes to their bottoms they won’t even go there, it is a taboo, it is terrifying, hideous, and even immoral. All the health benefits of the bidet are out there, like hygiene and comfort for people who have hemorrhoids or even constipation! Using water instead of paper could save us tons of trees. According to Justin Thomas, editor of the website Metaefficient.com, Americans use 36.5 billion rolls of toilet paper a year, that is a lot of trees, 15 million to be exact.

Americans’ bidet phobia has a long history and started a long time ago, with the British attitude toward the French, who invented the Bidet (Strong Hors). It was looked at as a Royalist, and reflect of hedonism. In WWII, American soldiers in France had seen bidets in places where they were most interested in; brothels.  Soldiers did not go around that much. So when they came home they associated Bidets with uncouthness and immorality. Toilet paper became the preferred medium for bottom washing, it was marketed by a paper company, and popularized by Sears Catalog in bathrooms until everyone started squeezing the Charmin.

Lots of Muslims go to mosques not just to pray and learn jihad, but for indoor plumbing where Shattaf is provided, and everyone uses them. If public bathrooms and businesses here don’t provide Shattaf, then Muslims will avoid them and go elsewhere. Muslim businesses provide toilet paper but they also have the water-can or Shattaf,  for Muslims to use, so customers have options according to their rituals. A Midwestern business owner  told me that when he installed a Shattf in his bathroom, lots of his non muslims customers avoided going to bathroom, and some deserted restaurant altogether,when he got ready of the Shattaf, his Somali customers demanded their shattaf back. I usually try to avoid going to public bathrooms or friends’ houses, I just hold it in till I get home to my beloved Shattaf.

America Clean your bottom, clean your act, try the Shattaf, it is the best thing to have happened since sliced bread. Coming home after a long vacation, two things I look forward to, my dog and my Shattaf, one happy to see me; and the other I’m happy to see it.