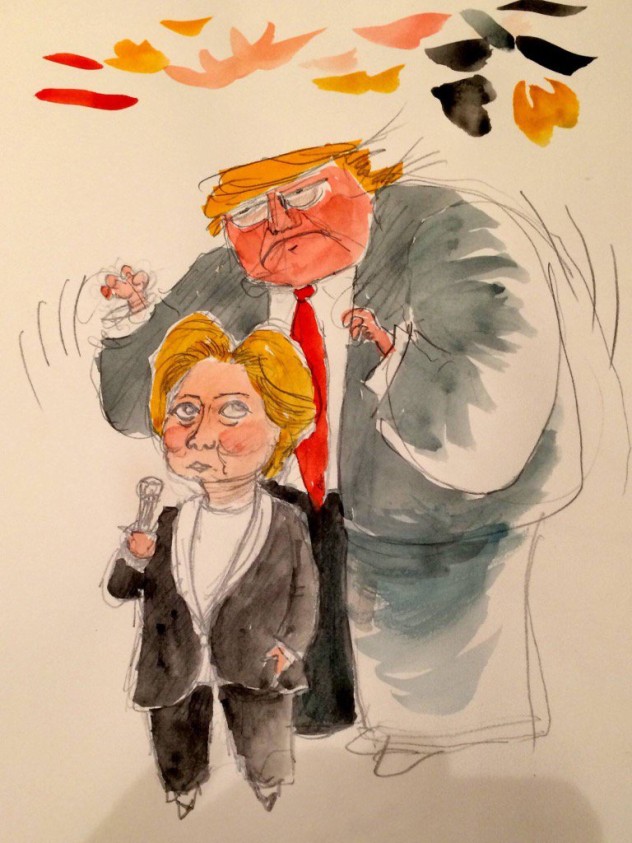 The Locker Room Debate
As millions of Americans who geared up to watch the second debate/match between Hillary Clinton and Donald Trump, all eager to see how Donald Trump would perform after his lewd conversation about women tape was leaked.
In this tape, according to Trump, kissing and groping women’s private parts is a normal celebrity privilege, and just Locker Room talk. Once Trump had his press conference freak show appearing with four of ex-President Bill Clinton’s female accusers, I knew it was going to be a long night of mud fights and the possibility of adult language being used, so kids weren’t allowed in the room.

My dog sensed something ugly was about to happen and retreated to the bedroom for an early retirement. The pot of tea was on the stove, my bag of roasted pumpkin seeds on my right side, my phone for tweets on my left and a sack of tangerines in front of me; I was ready for the debate. Then the time had come, the introduction and no handshake, this is going to be the debate of the century, contentious and bloody.
The debate started slow and predictable, a soft jab here and there, Donald Trump with the swagger seeming preoccupied and rattled, lots of sniffing that was matched with Clinton’s exaggerated smirks. Then in the 2nd round the question of the lewd tape came up, here comes the moment that millions of Americans were waiting for. I got my phone camera ready and then… Anderson Cooper uttered the T word..  “… Mr. Trump, about the tape that was released on Friday, as you can imagine… You called what you said ‘locker room banter.’ You described kissing women without consent, grabbing their genitals,” asked the CNN host. “That is sexual assault,” Cooper said. “You bragged that you sexually assaulted women. Do you understand that?” he interrogated Trump.
I don’t think you understand what was said,” Trump fired back. “This was locker room talk. I’m not proud of it. I apologized to my family, I apologized to the American people. Certainly, I’m not proud of it, but this was locker room talk.”
Then Trump decided this was satisfactory and, as an Arab dictator, diverted the issue to justify his horrible acts, turning to ISIS to rescue him, “You know what we have—a world where you have ISIS chopping off heads, where you have men, frankly, drowning people in steel cages, where you have wars and horrible, horrible sights all over, where you have so many bad things happening,” Trump sniffed.
This is a rich white man privilege, and they only understand what that means, but for me the most horrible I have heard in my locker room is ‘let us go and grab a burger.’ I kind of tuned out and focused on peeling a tangerine until a Muslim woman from the audience stood up and asked the two candidates what are they going to do about the rise of Islamophobia in this country and the branding of all Muslims as terrorists:

“Hi. There are 3.3 million Muslims in the United States (it got to be more than that), and I’m one of them. You’ve mentioned working with Muslim nations, but with Islamophobia on the rise, how will you help people like me deal with the consequences of being labeled as a threat to the country after the election is over?”
I though this question was more to Mrs. Clinton who actually leaned in that direction, since Trump has a different approach to dealing with Muslims. But the hostile ABC moderator Martha Raddatz had another plan. “Mr. Trump, you’re first,” she asked.
“Well, you’re right about Islamophobia, and that’s a shame. But one thing we have to do is we have to make sure that — because there is a problem. I mean, whether we like it or not, and we could be very politically correct, but whether we like it or not, there is a problem. And we have to be sure that Muslims come in and report when they see something going on. When they see hatred going on, they have to report it” Trump stated.
How do you see hatred? According to Trump, Muslims have a special skill and are experts at spotting hatred and reading what people are going to do in the future. “Muslims have to report the problems when they see them,” Trump said. So the biggest threat in America according to Trump is the fact that Muslims don’t report hatred and the bad things they see, even the fact that most of the mass shootings and terrorist acts are done by non-Muslims in this country, this didn’t stop the Republican candidate from digging into his own Islamophobia to answer a question about Islamophobia.
So Trump, the ISIS of US politics, who states that he is going to jail the former Secretary of State, when he asks Muslims to report on any bad thing they see, we need to take him seriously. Well as a patriotic Muslim who has been living in this country for years, a Muslim American who has been assimilated faster than Mr. Trump’s hair has, I report that on that Sunday night, at a town hall in Missouri, I saw a big orange man stalking, bullying and trying to grab a white woman!!