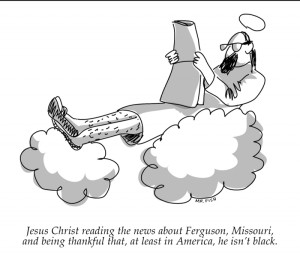 On the job application that I filled out 30 years ago, Arabs and people of Middle-Eastern descent were included in the box under ‘white.’ Lots of Arabs didn’t mind that and enjoyed the ride of white privilege at least on paper. In the good old days, that is before the 9/11 tragedy, which changed the Americans’ psyche toward Arabs and Muslims forever, Arabs thought of themselves as invisible, and racism and racial profiling were just black issues, not theirs. Although, Arabs have their own misplaced racist attitudes toward darker-skinned people–even of their own ethnicity. The issue of Arabs and African identity is still a sad reality even though lots of Arabs with darker skin live all over the Arab world, such as Egypt, Yemen, Saudi Arabia, and the Gulf states, and the Sudanese are all black. But this could be considered more geographic bigotry than racism. In the U.S., 9/11 has changed everything, changed the complexity of skin color and racism in the Arab American community; racial profiling and discrimination have risen substantially as have the assaults on Arabs and Muslims.
According to CAIR, a Muslim American advocacy group, studies from the American Civil Liberties Union, and the U.S. Department of Justice, among others, have shown that there has been a sharp increase in anti-Muslim sentiment from politicians, an increase of anti-Muslim activities, an increase of opposition to mosques, and an increase in the activity and number of anti-Muslim hate groups since 9/11.
Before 9/11, my white friends used to call me Omar Sharif. Now they call me Mullah Omar, maybe because of aging, but humor me. Arabs/Muslim post 9/11 are now suffering what Africans Americans have been suffering for long time. This reality has forced new federal policing rules that will expand protections against racial and ethnic profiling to include gender, national origin, religion, sexual orientation, and gender identity.
With the latest events in Ferguson, Missouri, New York City, and other major American cities, the frequent killing of unarmed black men by white police officers with few indictments or charges, now Arab Americans feel the same pain, the same injustice and frustration. In general, Arab-Americans trust the police but they have begun to doubt and question the job of the police to protect and serve. As a black activist said of police brutality to black men, “You can’t protect people you hate!!”
With protests against police brutality erupting all over major cities, Arab Americans feel for the first time that this is their fight, too, and that they aren’t white anymore. Now you can see Arab and Muslim-Americans in every protest taking part in the demand for justice. I went to cover the latest protest here in south Minneapolis, which shut down I-35W for a short time, capturing national and international news. People warned me and asked me to be careful, but for an Egyptian-American who attended three one-million-man marches in Tahrir Square in 2011, and has been observing police brutality in Egypt for the last three-and-a half years, nothing can deter me or surprise me about police behavior anymore. With my cameraperson, Mark Deziel, we took off for the “Black Lives Matter” rally. Crowds congregated on 34th and Nicollet Avenue, by the Burger King parking lot, to show solidarity with the fast-food workers’ demands for higher wages. A diverse crowd, whites, blacks, Latinos, Native Americans, Asians and yes, Arabs, joined the rally, and none other than Sabry Wazwaz, an Arab American from the Anti-War Committee, helped in energizing the crowd with his chanting in the loud speaker,. “We’re sick of always seeing unarmed black men killed by the police. We are all in this together because this system we have is always against blacks, Latinos, Arabs, natives, all minorities.”
The police were watchful, but from afar, leaving protestors to express their anger and frustrations. Now black men are killed for just doing ordinary things, like walking, talking, wearing a hoodie, driving, shopping or eating candies. There were a few speakers, with the culmination being the calling of the names of those who have been killed by police. Then the demonstrators marched in orderly fashion to Hwy I-35W through the south Minneapolis neighborhood, as police inside their cars kept their distance. The people in the crowd were holdings signs and chanting, “I can’t Breathe”; “No justice- No peace”; “Eric….Garner”; “This Street is our street”, and “Shut it down”. The police blocked several street intersections so the protestors could march through. Then the demonstrators reached the I-35W exit on 35th Street, marching through, and much to my surprise, entering the empty highway as police patrol cars blocking the incoming traffic from a mile away. The scene was tense and the crowd gained momentum, showing their defiance to police instruction to leave the highway through the 31st Street exit. In the middle of the highway, suddenly the demonstrators had a “die-in”, lying down in the middle of the highway. A few minutes later everyone got up and proceeded to march to downtown Minneapolis instead of leaving at the 31st Street exit. As the police waited helplessly, a sense of triumph took over the crowd, who started chanting “Who shut it down?”–“We Shut is down.” As an Arab American who has been watching images of Egyptian police brutality and the killing of peaceful demonstrators in streets, universities, and squares, I was so grateful to watch our Minneapolis police force, who for the most part were acting as organizers and peace keepers more than security enforcers, which hopefully is the lesson they learned from what happened in Ferguson and New York City.
Ahmed Tharwat / 12/6/2014
Host Arab American TV show BelAhdan
Airs on tpt, Mondays at 10:30pm
Blogs at www.ahmediaTV.com
Can be reached
ahmediatv@gmail.com