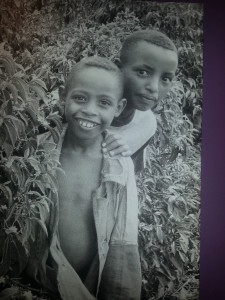 Abu Zaid, was only 8 year old, he was a different kind of kid, gender neutral, people didn’t look at him as a boy or a girl, he was just Abu Zaid, didn’t have a family, but he was adopted by everyone, he didn’t have a house, but never homeless, he got into everyone’s house, at day he was in the street playing, at night he disappears, vanish in the dark village field , he never took side, but was called upon when everything else failed, getting grocery to elderly, gets laundry and, Newspaper from the station to school teachers, chasing stray dogs, he didn’t try to be a leader but kids followed him, he was dark with a wide white smile, he loved to follow me wherever I go, when I was hunting for birds, he comes and picks up the small rocks that I use for my slingshot, he was my golden retriever, chasing birds and bring to me. never gasp, talks about anybody, never seen him getting into a fight, he helped everyone and never asked for help… , Abu Zaid was a beautiful kid, with a great spirit, lived his life free as bird, see him anywhere, he lives without an addressee, so he never got lost!!