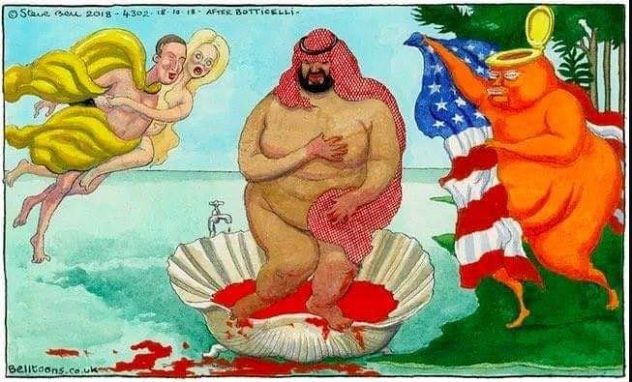 One of the most astonished supporters of Mohamed Bin Salman, known by MBS. As the   Guardian reported, is Ali Shihabi, the head of the Arabia Foundation , a thinktank lobby group that basically a Saudi Royal family operative its main job is to wash off Saudi dirts in the US, Mr. Shihabi an ex banker once said “MBS has “balls”, but still young” , incidentally Thomas Friedman in his latest love letter to the crown prince, tells us that MBS the reformer now has the “ball” in his hands, I hope it is not one of the “Balls” that Ali Shihabi was talking about.

The love affairs of Saudis  Royal family didn’t just start with  those overpaid cheerleaders. The Saudi Arabia has been run by successive brothers for more than 80 years, since King Feisal,  all and according to the New York Times, were reformers, these brotherly clans kept more or less  Saudi Arabia a float and their citizens contents, the Saudi governing style, leave politics to us and just enjoy  the hefty pensions.  Now, the late king Salman decide to change all that, violating the Saudi Royal brotherly narrative , he promoted his own son crown prince MBS  to power sided his more level headed brother crown Prince Muqrin. Now MBS is running Saudi Arabia like a frat boy that is playing with his own shit out of boredom.  The gruesome savage mafia like killing of Saudi citizen and Washington post writer Jamal Khashoggi shows the brutality of Crown Prince MBS, and the direction Saudi Arabia has been going since he taking the throne and running the family businesslike ‘mafia style’, and MBS is the hard-headed Sonny of the Corleone family. This is not just in Saudi Arabia, this is rampant in the whole Arab world as Ahmed Fathi, Managing Editor American Television News told me in a Skype interview. Egypt, Jordon, Algeria, Syria, Gulf countries. Those Arab dictators, stay in power too long,  gain absolute power, destroy what means to be a country, and they become the country itself,  weakening institutions, justice systems, free press, civil societies, the police and military become the dictator militia, their main job is to save and protect the dictator. When the Arab dictator term ends, killed or a call from god, the son inherits the throne, with nothing much left of a country to stop the him (always him) from becoming  a bad dictator.! The son of a dictator grow up insecure, boubous, narcissist, they demand total obedience, reward loyalty over competence, they master the art of manipulation and create fake reality..

In Egypt Mubarak stayed in power 29 years, kind of keep Egypt afloat, flirting with democracy in his later year, a tolerated dictator by most of Egyptians. But once he started grooming his son Gamal for the presidency, his son also acted like Sonny in the Corleone family, abusing his power, getting ready of any possible contenders, or oppositions, has his father dictatorial temperament combined with abrasive youth. Egyptians took notice and they toppled him, his dad and the whole autocratic system… on Jan25th, 2011 revolution. Now dictator elSisi of Egypt hasn’t learned the lesson,  and is grooming his son to take over after him, 30 years from now god willing.

Assad’s son, Bashar an eye doctor came after the death of his father with lots of reforms promises, then he took Syria to dark ages, a complete destruction and a clausal disaster. In Libya, Qaddafi with all his craziness ruled for almost 40 years, once his flamboyant son, the second of nine children, Saif al-Islam been groomed to take over his father thrown, Saif al-Islam which means in Arabic (the sword of Islam) it figures, was extremely brutal against his and his father’s opponents, Arab Spring and the bombing of NATO, changed all that; his father was savagely killed, and Saif al-Islam was captured, now he has the audacity to play a role in Libyan future, with the help of the Europeans sensitivities. King Hussein ran Jordon for a long time,1952, stayed in power until his death 1999,  he had the skills and cunning to survive turmoil and pressure from all sides, then his son Abdulla took over, the flamboyant king who, after ISIS killed one of his piolet (burning him)  promised fighting ISIS by himself,(he is a fighter by training)  actually took his fighter jet and unloaded a few bombs in a remote desert came back victorious .

Abdullah Saleh of Yemen, wasn’t as lucky, and running a country as he put it once “like dancing on head of snakes” shifting alliance and enriching himself in the process until one snake bit him got him out of his misery. His son Ahmed Abdulla,  was the  head of the National guard, that didn’t  save him. Saddam Hussein’s sons, Qusay and Uday Hussein, Uday was the most brutal one, with a history of rape, torture and killing, both sons were killed a few month after the US invaded Iraq. Dictators sons make bad leaders, even a young reformer like MBS; Where, Now, Saudi women can drive to the funerals of their killed families members freely. 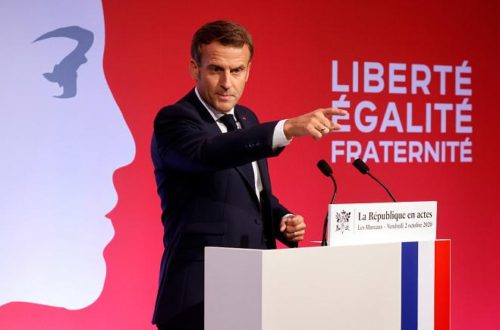 WHAT IS MACRON’S PROBLEM WITH ISLAM AND MUSLIMS!!