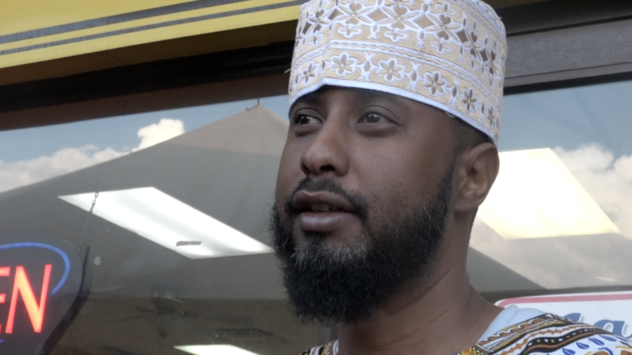 The holy month of Ramadan began a couple of weeks ago, I’m not sure when exactly; either May 14th, 15th, or 16th, depending on who you talk to, or where you live and what political agenda you have. If you google it, there is a disclaimer under Google’s answer that says, “Dates may vary.”

Muslims however still use the naked eye to spot the beginning of the month moon, the crescent. Ramadan is the most scared month for Muslims, it is the month when god revealed to the Prophet Muhammad the first verses of the Quran. Ramadan is observed by millions of Muslims around the world, so it should come as no surprise that you have seen, heard or met a fasting Muslim. Ramadan now comes in the summer season where the number of hours that Muslims must fast varies based on where they live. In a country in the northern hemisphere, like Denmark, there is a whopping 22 hours of fasting time. Maybe that is why a Danish government official tweeted that long fasting days pose safety hazards and are “dangerous for us all”! This politician must not have seen the brave young Muslim man whose fasting didn’t prevent him from climbing four storeys to save the life of a dangling 4 year old child in Paris, now coined the ‘French Spiderman’, who incidentally was granted French Citizenship by French President Macron. What Muslims have to do, to get citizenship nowadays!

In America, there are 17 hours to endure and in Minnesota summer temperatures often reach 100 degrees Fahrenheit (about 32 C). However, the hardest part about fasting in America is not so much the long hours and the heat, it is fasting in a country where eating is a form of entertainment, where meals, coffee breaks and snacks are everywhere and eating never seems to cease. Some Middle Eastern restaurants like Marhaba, Marina Grill, and Holy Land will have a Ramadan Iftar buffet where hungry Muslims and their families come to break their fast at sunset. Families and friends gather to break their fast and celebrate the holy month together in a magical communal evening. Muslims are often asked questions about their faith and practices, and we explain patiently that fasting Ramadan is one of the requirements of the five pillars of Islam. The other four are belief in one God and the finality of the prophet or “Shahadah”, pilgrimage to Mecca or Haj, Almsgiving or “Zakah”, and praying five times daily. Allah (God) says, “Fasting is mine and it is I who give reward for it. [A man] gives up his sexual passion, his food and his drink for my sake.” Thank god this is only during the day! In the evening Muslims celebrate fasting by overeating, not sure about the sex part though!

In fact, most Muslims will observe fasting even if they aren’t keen on following other pillars of the faith. However, not all Muslims fast and there are legitimate and creative ways to avoid doing so. During hot summer days in Ramadan, growing up in Egypt as a youngster, there were some ways of avoiding fasting, like travelling (at least 80 miles on a mule, but nobody has tried this recently), bringing their old medical records to their doctors for permission to avoid fasting, or just simply not fasting at all. Islam doesn’t require children to fast until reaching adolescence, l-Kharqi said: “When a child is ten years old and is able to fast, he should start to do so.” But fasting at earlier ages gives Muslim children some sense of growing up, like a rite of passage, and kids want to emulate their older brothers and sisters. Some strict Muslim parents will demand of their youngsters to fast for at least a short time as soon as they can walk. At Marina Grill restaurant, where I went to cover the first day of Ramadan, a father was bragging about his young son fasting; “I’m not even old enough to fast yet,” the 9 /10 year-old son fired back. Forcing your kids to fast is not always a virtue and could be counterproductive. Growing up in Egypt, as a youngster, my parents were relaxed about religion. Indeed, my dad had a great contempt for zealous imams and preferred to live by example and despised preaching. In this way, my dad raised eight children and the only thing he liked about Ramadan fasting is the not eating part; “be hungry be healthy, the prophet says,” he explained when we asked for food. In a majority Muslim country, cheating on fasting is not a piece of cake, and can be very tricky in a country where everyone around is fasting. Last year there was a protest in Tunisia, and this year in Morocco demanding the right not to fast and eat in public in Ramadan, which is like the right to drink alcohol or have sex in public. “If you are keen on committing a sin, do it in your own privacy,” we were instructed by god. Public spaces have their own rules and etiquettes that are protected by law in any country, Muslim or not. Americans are still curious about Muslims fasting, some think it is evil and a sneaky way to bring Sharia to America. Some still can’t believe it is from dawn to sunset; frequently asking, can you drink or smoke? No we can’t! We are refraining from eating, drinking, smoking or even sex, Muslims being first to equate sex with food. The idea is to cleanse your body and soul for a month, so the rest of the year you appreciate other people suffering, struggles, the millions of people still hungry around the world, even here in the richest country in the world. Fasting is not too hard if it is shared. I still miss the magnificent scene of the sun setting on the horizon, the anticipation of “Azzan”, the call for “Maghrab” (evening prayer) to break your fast, the food preparation, the sizzling smell of your favorite Ramadan dishes, the communal eating at the public Ramadan dinner table set up in streets and squares, the chat, the Ramadan TV series that last all night, bringing families together, the walk through Cairo streets at night, and most of all the “Mosahraati” – a drummer who comes late at night beating his drum declaring time for your last evening meal, calling your own name chanting: “Esha Ya Nayem Wahed El-Dayim – Wake up sleepy-eyed and worship the everlasting.” And one last thing, please when you greet a Muslim for Ramadan, don’t say, as it was customary before the Egyptian revolution, ‘Ramadan Mubarak” – now just say ”Blessed Ramadan,” which I can now see on a lawn sign in my neighborhood, “Ramadan Kareem” neighbor!! And thank you!

FROM TAHRIR WITH LOVE

UNAMERICAN: WE ONLY DO COUPS OUTSIDE OF THE UNITED STATES