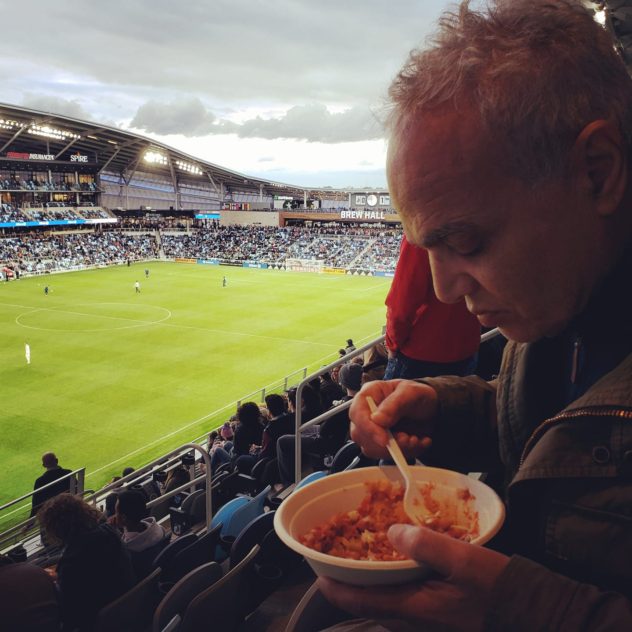 Iftar at the Soccer game

On Wednesday night, Minnesota United Soccer team matched up with the German Bundesliga Hertha Berlin team for the first ever international friendly at Allianz Field. The reservation was made four month ago on line, SeatGeek, which obviously they don’t use the Islamic Colander, so I didn’t know it is going to be in Ramadan. Planning is way overrated however, it was one of the most memorable Iftar I ever had. Watching a game while fasting is not as bad as playing while fasting, If a superstar Egyptian player like Mohamed Saleh who plays for Liverpool is fasting during the game, I can watch the game fasting too. The game starts at 7pm and the Iftar, breaking fast is at 8:35pm, so I need to have a real plan here.

Can’t sneak Ramadan food to the stadium, without alerting security to this terrorist food , besides you don’t want to invite attention to yourself, a Muslim having Iftar at a game it is not the kind of exciting fun images Americans would like to see on the screen at the stadium. I left around 5pm to the stadium in St. Paul, traffic was moving and the parking I reserved was a few blocks away, by Cub food and Target parking where the staff and security guards spotted all over the parking lot making sure you aren’t a soccer fan intruder. Their,  don’t even dare look,  did the trick. Parked my car at the designated spot, walked a few blocks back to the Allianz Field stadium, which according to their website inspired by the rippling water of the land of the 10,000 lakes.

Allianz distinctive design that you can see in a dozen countries around the world, most noticeably Bayern Munich stadium in Germany. The stadium looks impressive with inviting landscape outside, native trees, Bike parking and as they said, Sustainably-designed to minimize environmental impact. As I’m walking to the gates the germen Hertha Berlin team bus pulled over, with the a big sign “Berlin Tears Down  Walls”  Tour which I wasn’t sure the Berlin Wall or Trump wall.

The security at the gate asked to drop anything metals in the plastic pin, as I’m getting my keys , cell phones, just discovered a few dried Egyptian dates in my pocket which I had kept to break my fast.

I hope the metals dictator wont bazar with them. Walked through peacefully, scanned the ticket electronically. Inside the stadium, lots drumming and blue smokes, from the Standing section, national anthems for both teams were played, no jets flying, no god blessing our troops around the word, no cheerleaders and no taking knees in soccer games. Soccer in America is the essence of taking knee protesting other American dominant sports. Soccer is a simple game that is complicated by coaches in America, here is my advice, to MN United officials, premier league in England didn’t make it big by the genius of British coaches, most coaches in the British league now are imported from abroad, Italy, Spain, Germen, and that goes for the players too. Which has changed the way game is played in England, lots of positions, passing, creative midfielders where the attack starts from the feet of the goalies. Biggest problem in American soccer is, players think they only move when they get the ball, running without the ball is the most important skill in soccer. Which is a dying art in a such efficient productive country like America! Where players think they cant be productive without the ball. Lots of kicking and running, younger players are too anxious and eager to follow the coach rules. Lack of self expression and creativity killing the soccer game . Fans in the stand are too busy eating and drinking, I was the only one in the Stadium not eating…, fearing being noticed observing Sharia in public,   .  it was  Iftar time.

I left to explore my options at the concession stands, which usually as the name indicated you concede to lots of concessions, with low quality and high prices hot dogs. However I found much to my surprise, The concession at stadium was like walking inside an global market with lots of bars and elegant European looking stands, the diversity of food is noticeable, no international tensions, peacefully coexistences between nationalities and cultures, with Brasa Burrito, next to Hot India, and West Indies Soul Food, a Jewish Cecil’s Deli, neighboring nicely with Somali Afro Deli, a hungry Moon looking down Handsome Hog BBQ, with Stoli portable Bar featuring a Russian collusion with Moscow Mule, Loon Juice Hard Cider. An impressive display of food diversity only seen in soccer games, “Our food and beverage offerings reflect the diversity of soccer and celebrate our multicultural fanbase,” said MNUFC CEO Chris Wright. Breaking my fast with my Indian Hot dish and a few Somali Sambusa surrounded by thousands of soccer fans sharing my Iftar under the concession big tent of Allianz Stadium , was an Iftar to remember. Blessed Ramadan everyone. 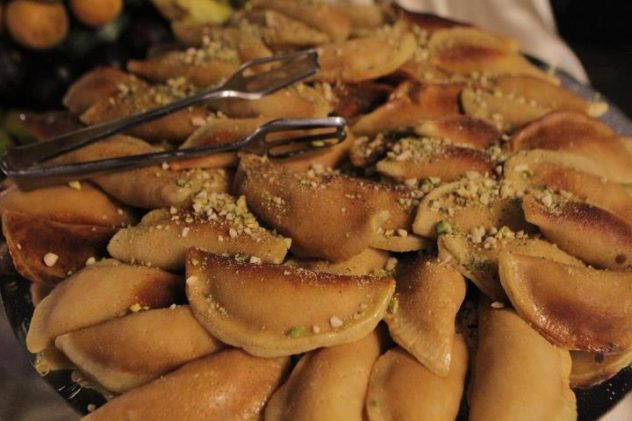