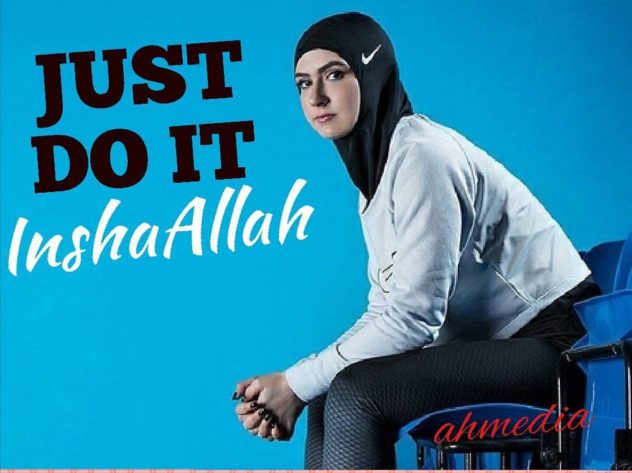 Just Do It!! InShAllah!!

The sportswear giant Nike has finally realized that the hijab is not a symbol of oppression after all, but again, only if it is their design or has its logo. The hijab that Muslim women have been wearing for hundreds of years has gotten the recognition it deserves. The issue of hijab and Muslim dress is taking a huge space of our conversation. This is not just in the west but also in the Muslim world. Ironically while Nike is trying to tap in the huge hijab Market, some Muslim women now, are taking them off to show the modern warm soft Islam. Last week Egypt celebrated the 2nd anniversary of taking the hijab off One-Million-Woman March, as it is championed by General el-Sisi in Egypt and his co-horts in the Gulf states. To be clear, Muslim women wear or don’t wear their hijab based on lots of socio- economic issues, other than religious ones.

Islam wasn’t clear about the Hijab requirements. God doesn’t usually get into women’s fashion, and the prophet was busy completing and perfecting the Abrahamic faith let alone what should women wear or don’t wear. When it comes to Hijab, and unlike Nike, God doesn’t order women to, “Just Do It… InShAllah.  The Hijab that Muslim wear now, is very personal, stylish, and varies, it is becoming a fashion statement. You can see proud young and old women, wearing modern and traditional hijab, all express their identity and personalities. Now Nike wants all Muslims wear one hijab, an ugly looking black one that looks like it came out of  Black Sails movie,

Above all, Women and men are required to be modest, and this is a guideline that should cover lots of clothing styles and costumes around the world’s different climates; cold, hot, sandy, icy, or the political climate of Islamophobia. All require different costumes, and creative solutions.

“Female Muslim athletes have struggled with finding headgear that will not slow them down or distract them from arduous physical exercise.” Reported Valeriya Safronva

of the New York Times, Struggled!! wow I think pronouncing her name was a struggle for me to get it right. There are more than a billion and half Muslims around the world, This would make any corporation to salivate. Nike’s new Hijab motive is not so clear, empowering Muslim women or a marketing opportunistic camping. If Starbucks thought they could solve racism in this country by having a coffee drink together, to be fare Obama tried it over a beer drink too.

How about oppressed Muslim men, who wear Keffiyah over their heads. Have you seen a man running or playing sport with Keffiyah lately. Nike may tape on that market too with sport hat, maybe a baseball hat will do for now for athlete Muslim men! According to Morgan Stanly,  Sportswear sales reached $270 billons last year, almost $100 billion in the US alone. in this

Nike … Just Did It!!  Nike Hijab, as was described is “new pull-on hijab made of light stretchy fabric that includes tiny holes for breathability (thanks god, women can breathe now) and an elongated back so it will not come untucked.” god forbidden!

There are lots of reasons why a woman covers or uncovers her body, social, cultural, religious, personals, fashions. Muslim Hijab played a major role to help women express their identity but also her political expression, against western influences and interferences and Oppressive Arab and Muslim regimes, the less political expression the more religious expressions. During President Nasser tenure in Egypt, he was a dictator, but he the champion of pan Arab, fighting the  people of the west. People felt proud of their own ethnicity and of being an Arab and that was enough, no need for a religious expression. Now, with assault from the west on Arab Muslim culture, that Arab/Muslim leaders are joining in with the so called war on terrorism, as a pre-text to crack down on oppositions and descents, that turned Arab Spring to a terrorist threat to stability and peace.  After the tragic attack of 9/11, religious attendances went up people start going to the churches more often. According to Gallup polls, American church attendance was up six percent first weekend after the attack. The Christian right gotten stronger, political appealing to Christian sentiments, and now supporting a racist and a light fascist to make American white Cristian again.

Lots has been made about the Nike Hijab thing, and Nike invasion of Muslim women fashion, Muslim women took on social media and blistered Nike cultural intrusion …

“dear @Nike, the sports hijab that you’ve ~invented has been around for a while. I’m more interested in modest & light clothing #NikeProHijab”

Nike has a hijab now. But is it really empowering Muslim women?

And from  Hend Amry,  we can always count on her wit and humor,

“This is horrible! I’ve been successfully using hijab as an excuse to avoid running for years.  .”

and of course, me

..as a muslim man’ I’m waiting for the Nike Keffiyeh. #Nikehijab

other non-Muslims pitched in as well.. here is Lori worried about endorsing stoning of Muslim women..

If you liked the Nike Hijab… You’ll love the new high-performance NIKE stones for when she takes it off. #BoycottNike #BanSharia #MAGA

..and of course you can’t talk about color people without injecting words like savagery…

Tucker a talk show host wasn’t so happy about Niki Hijab , He compares Hijab to the KKK outfit, that shouldn’t be endorsed or supported by Nike, would he feel the same way if he knows that most of rapists in this country probably were wearing Nike shoes or hats!!

Another one brings up the assimilation thing!

“Nike to rollout performance hijab. This is ridiculous. This is America. Assimilate or leave should be the option. #MAGA”

Here you have it assimilate or perish, assimilate to wearing  Nike shoe, or Nike hat..!! Nike has spent millions of dollars telling Americans don’t think about it and ‘Just do it”, but according to U.S. Centers for Disease Control and Prevention’s National Center for Health Statistics, “Since the late 1980s and 1990s, American has put on 15 0r more additional pound without getting any taller” As we all know, men cloth sizes is determined by measuring nick or waist, however women cloth size measurements is more arbitrary and commercial enforced than men.