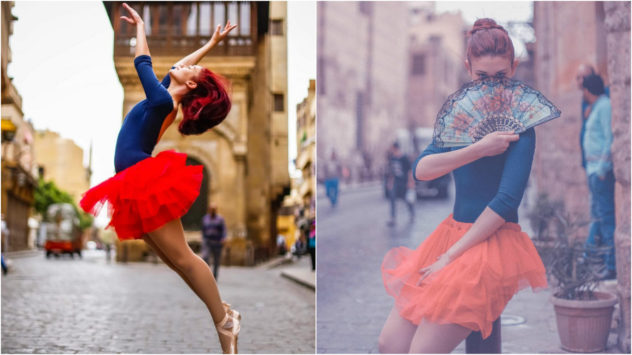 Dancing in Cairo Street!!
The young ballerina, Nour Yasser went on a dancing spree across Cairo’s old streets, “she captivates city dwellers and passers-by, drawn to a scene unusual in Egypt’s conservative urban life.” reported the Cairo Scene. “Our project aim was to explore the beauty and diversity of Cairo.” photographers Mohamed Taher and Ahmed Fathy explained.
Egyptians have been dancing in the street for ages, at wedding, sports events, at religious social festivals, and in any occasions. The difference was, there wasn’t the intrusion of a camera.

As you watch the photo/video of the ballerina cutting through the streets,  flashing her western dress superimposed on the heart of old city, the few locals looked at this cultural oddity and cringe in bewilderedness. However, at the same time, they welcomed those dancers in their mist. The same locals may get arrested if caught walking let alone dancing, in the street where those dancers live. Cairo street didn’t really need a ballerina from outside to remind the locals of how beautiful their streets are,

Egyptian streets have always been vibrant, full of lives and history. What was missing of all this Ballet in Cairo project, is the people who live there, their lives, and their stories. Streets are the most honest place left in Egypt right now. Egyptians may feel that they lost their political freedom and country squares, but they still feel they own the streets. One of the most culturally enriching experiences I had when I lived in Egypt, was spending time walking in the streets, where you can observe a snapshot of five thousand year of history and culture in one block. I have always enjoyed walking aimlessly losing myself in Cairo street listening to its stories. As they say if you don’t know where you are going you never get lost. 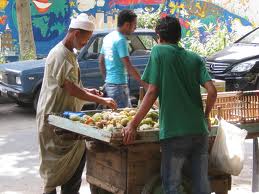 On my last visit to Egypt, on a chilly summer evening in Cairo city, after a long day of visiting and jostling with shopkeepers and friends, I walked in the city that never sleeps. The street was nervously quiet, lost in the dark allies of downtown, no particular place to go, nobody to speak with, hugged by the tired old building and broken sidewalks. The lights are tired and blurred, trash freely flying in the air, performing the last dance of the night, with no one to admire or cheer for its elegant dance. The square finally rested after a long day of traffic abuse, stores finally retired, their doors are down closed with big locks. Cats and dogs running across with some purpose. I waked aimlessly in Cairo street as therapy, it cleanses your soul. I was alone, having the city all for myself, trying to lose the sorrows of the day. I crossed liberty square, it was empty and quiet. That Square which was the focal of world attention for 18 days, the Square where millions of Egyptians chanted Life, Freedom and social justice, was quiet, and abandoned. I reached the Nile river that breaks into the heart of the city. The fresh air, the reflection of the stars on the river surface, telling many stories of broken hearts causality of love stories left behind on the river bank –Al-Qurneesh-. The sky was clear, with just of scattering of small stars, and no moon to focus on. A short distance away I spotted a street cart tucked away next to a damaged sidewalk,  with a pile of Prickly Pear Cactus on the top of the cart, fresh, colorful, and inviting, its piercing sharp pricks seemed ready to deter any intruder. The sleepy owner was not in a selling mood, lying down next to the cart, his dog was unmoved and oblivious. Not sure what to do, I wake the man up or leave him alone with his dreams. On the street of Cairo, it is hard to tell if business is open or closed. I slowly approached the cart, stood quietly looking at the Prickly Pears, without uttering a word, or asking anything of him. The man woke up and started, peeling the fresh cactus with his bare hands, one by one started coming out of its shell, like a naked new born. He quietly handed them to me one at time, miraculously avoiding its sharp pricks, Then the conversation with a stranger broke out, like Shahrazad, as long as his stories go, eating the fresh Cactus never stopped. He never asked me my name, where I’m from, what I’m doing late that night alone. The man wasn’t as much interested in my story, as much I was interested in his. Eventually you realized that you are full and this has to end. I tried in vain telling him “Kefayah” (enough), Then there is always one last story to tell and one last one cactus fruit to peel.   I wanted to keep the evening alive, I wanted to hear another story, but my stomach couldn’t bear anymore Cactus! How much I owe you, which is not so common in street market transaction, usually a social pricing. You pay based on your own personal experience and social economics status. “nothing, it is on me Sir” the man said as he started counting all the peeled cactus skins left aside on the cart.
I paid him before he was finished with his counting scheme , then he went back to sleep looking for another dream. I walked away leaving the Cactus fruit man alone, back to my quest for another street story ,  without dancing over people dreams .