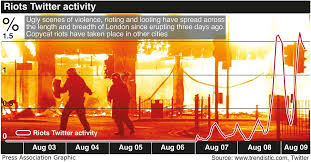 UK riots…. Arab Spring in reverse … or is it?
The British unrest spread to cities including Manchester, Salford, Liverpool, Nottingham and Birmingham, with shops being looted and set alight. Images of young men and women in the street smashing business, cars and anything that they can lay their hand on. who are those people and why are toppling their beautiful city, I don’t know exactly, but I can tell you that those are not the same people who a few month ago went to the same streets to see the royal wedding. Experts and laymen start wondering why are young British are angry and rioting all of the sudden, The British Summer as in the Arab spring was triggered by one incident, a killing of one young man, Mohammed Bouazizi In Tusnias and Kkaled Said in Egypt , and now the 26 year old Mark Duggan, who died at the scene in Tottenham, north London, on Thursday after been shot by the police. This single incident in every case sparked a deep major societal structure dormant crisis, in the Arab world police brutality and corrupt rotten undemocratic political regime, in England an economic neglect and disillusioned democratic regime. In both cases however people went to the street to revolt against a government that doesn’t represent them. The Arab spring unlike the riots in London, was mostly peaceful where the violence was only committed by government security forces, Arabs protesters chanting “Sylmeyah… Sylmeyah” peacefully … peacefully while facing tanks, and police brutality, the British police was the one chanting “Sylmeyah”, loiters were everyway you look, smashing shops, buses, and stealing anything they can carry; Anti government demonstrators in Egypt were the ones protecting shops, community and Museums, In England the protesters didn’t have any demands, no chanting of “ El Shaab YaReed Isqat El Nezam” the people demand the toppling of the regime”, It was a British Intifada, where people were actually smashing the symbol of economic regime that left them turkey; it wasn’t a British Spring, it was the Arab Spring in reverse. The youth sparked the Arab spring and the rest of the society had joined them even the Military, whereas the British youth who started the British summer were criminalized and the rest of society turned against them. The Arab Spring and the British summer may seem different and contradicting, but there are some similarities too between them, the government officials, in both sides focused only on criminality and security, no addressing of the youth grievances , and frustration. “We needed a fightback and a fightback is under way”, the shaken British Prime Minister, David Cameron, said after four days of riots. Major police operations are under way, as I speak, to arrest the criminals who were not picked up last night but who were picked up on closed circuit television cameras,” the British prime minister said. What about human rights and the privacy of those British minors. Prime minster, declares a Qaddafi Zanga Zanga style search, “we have detailed photos and camera videos, we will hunt them down” he added. “Picture by picture, these criminals are being identified and arrested, and we will not let any phony concerns about human rights get in the way of the publication of these pictures and the arrest of these individuals.” As we all know there are millions of video cameras on every corner of London street. One riot and the Prime minister started sounding like an Arab dictator, but the center London never looked like Tahrir Square in midst of the Egyptian revolution. The British official as their Arab counterparts, underestimated the depth of the problem and kept convincing themselves that this is only the fBook and Blackberry troublemakers, as if the social media caused the problem not just reporting it faster than the authorities who are usually older and slower. “we need to study the role and responsibility of the use social media” explained a British official on BBC live. If it wasn’t the fact that shutting down fBook, brought down Mubarak himself this may have come as an option. PM Cameron who had to cut short his Italian vacation to oversee the crisis, the gentle PM who during his visit to Italy went back to a café there to apology to a waitress for not tipping here, no apology here. “It is skinning to see people as young as 13 looting stores while they are laughing” chummed the prime minster. Those young British seem to him good enough to be sent to kill and die on a foreign soil in Iraq, Afghanistan but not on UK mainland. As in the Arab Spring, what happened in the last few days in London, it is not just for an economic justice, it is also a dignity revolution, where people no matter how poor they are, still want dignity and respect, “if the police want our respect, they need to respect us first” screamed one young woman protester, here we have two youth revolts, one cause mainly of lack of democracy and political corruption in the Arab world and the other cause of disillusion of democracy in England. One asked to topple the oppressive political regime and the other tried to topple the oppressive economic regime. In the Arab world we have people revolution; where people want democracy and freedom, in England what we have is a consumer revolution. Where people want freedom to have flat screen TV and things.